The world can limit global warming to 1.5℃ and move to 100% renewable energy while still preserving a role for the gas industry, and without relying on technological fixes such as carbon capture and storage, according to our new analysis.

The One Earth Climate Model – a collaboration between researchers at the University of Technology Sydney, the German Aerospace Center and the University of Melbourne, and financed by the Leonardo DiCaprio Foundation – sets out how the global energy supply can move to 100% renewable energy by 2050, while creating jobs along the way.

It also envisions how the gas industry can fulfil its role as a “transition fuel” in the energy transition without its infrastructure becoming obsolete once natural gas is phased out.

Our scenario, which will be published in detail as an open access book in February 2019, sets out how the world’s energy can go fully renewable by:

Our model also explains how to deliver the “negative emissions” necessary to stay within the world’s carbon budget, without relying on unproven technology such as carbon capture and storage.

If the renewable energy transition is accompanied by a worldwide moratorium on deforestation and a major land restoration effort, we can remove the equiavalent of 159 billion tonnes of carbon dioxide from the atmosphere (2015-2100).

We compiled our scenario by combining various computer models. We used three climate models to calculate the impacts of specific greenhouse gas emission pathways. We then used another model to analyse the potential contributions of solar and wind energy – including factoring in the space constraints for their installation.

We also used a long-term energy model to calculate future energy demand, broken down by sector (power, heat, industry, transport) for 10 world regions in five-year steps. We then further divided these 10 world regions into 72 subregions, and simulated their electricity systems on an hourly basis. This allowed us to determine the precise requirements in terms of grid infrastructure and energy demand. 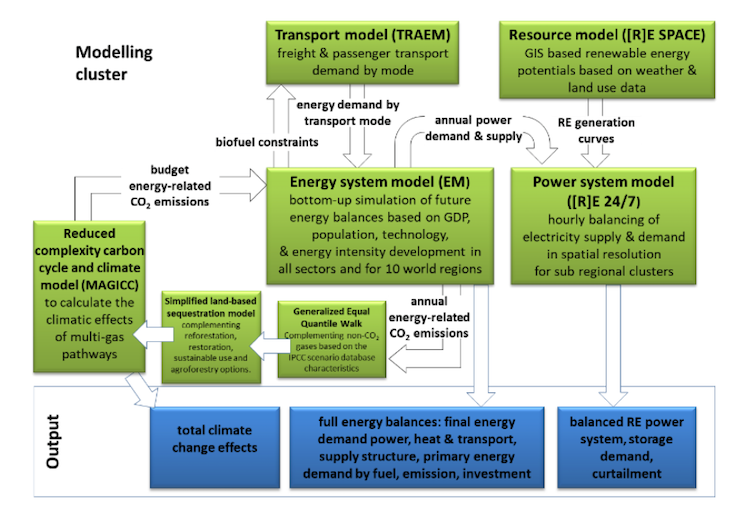 Unlike many other 1.5℃ and/or 100% renewable energy scenarios, our analysis deliberately integrates the existing infrastructure of the global gas industry, rather than requiring that these expensive investments be phased out in a relatively short time.

Natural gas will be increasingly replaced by hydrogen and/or renewable methane produced by solar power and wind turbines. While most scenarios rely on batteries and pumped hydro as main storage technologies, these renewable forms of gas can also play a significant role in the energy mix.

Along the way the gas industry will have to redefine its business model from a supply-driven mining industry, to a synthetic gas or hydrogen fuel production industry that provides renewable fuels for the electricity, industry and transport sectors. In the electricity sector, these fuels can be used to help smooth out supply and demand in networks with significant amounts of variable renewable generation.

A just transition for the fossil fuel industry

The implementation of the 1.5℃ scenario will have a significant impact on the global fossil fuel industry. While this may seem to be stating the obvious, there has so far been little rational and open debate about how to make an orderly withdrawal from the coal, oil, and gas extraction industries. Instead, the political debate has been focused on prices and security of supply. Yet limiting climate change is only possible when fossil fuels are phased out.

Under our scenario, gas production will only decrease by 0.2% per year until 2025, and thereafter by an average of 4% a year until 2040. This represents a rather slow phase-out, and will allow the gas industry to transfer gradually to hydrogen.

Our scenario will generate more energy-sector jobs in the world as a whole. By 2050 there would be 46.3 million jobs in the global energy sector – 16.4 million more than under existing forecasts.

Our analysis also investigated the specific occupations that will be required for a renewables-based energy industry. The global number of jobs would increase across all of these occupations between 2015 and 2025, with the exception of metal trades which would decline by 2%, as shown below. 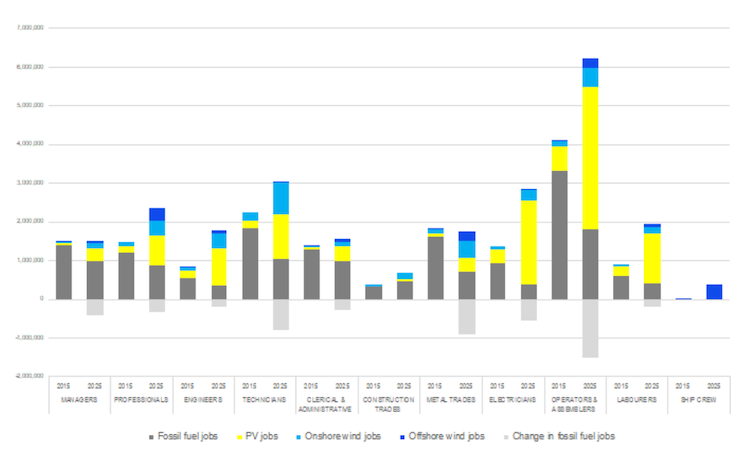 Division of occupations between fossil fuel and renewable energy industries in 2015 and 2025. One Earth Model, Author provided

However, these results are not uniform across regions. China and India, for example, will both experience a reduction in the number of jobs for managers and clerical and administrative workers between 2015 and 2025.

Our analysis shows how the various technical and economic barriers to implementing the Paris Agreement can be overcome. The remaining hurdles are purely political.