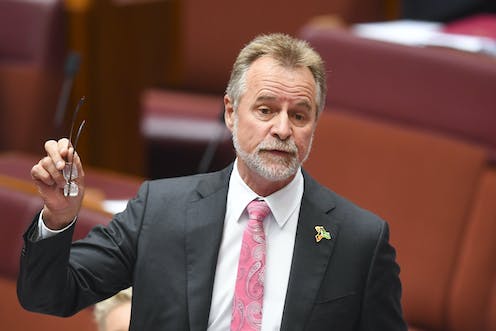 Two more federal ministers, Nigel Scullion and Michael Keenan, have announced they are jumping ship at the election, making three in a week to say they are leaving.

The third was Jobs and Industrial Relations Minister Kelly O'Dwyer, who is also Minister for Women. She cited family reasons for her decision.

Scullion - Nationals Senate leader, a member of cabinet and Minister for Indigenous Affairs - has been a Northern Territory senator for 17 years. There has been periodic speculation about his likely departure. He gave as his reason for leaving that “it’s time for me to go”.

A one-time fisherman and buffalo-shooter, Scullion has been Indigenous Affairs Minister for since 2013. His Senate seat is safe for the Coalition at the election.

Keenan, Minister for Human Services and Digital Transformation, who is in the outer ministry, was elected member for the Western Australian seat of Stirling in 2004.

His seat is on a margin of more than 6%. The Liberals have been struggling in WA, although some Liberal sources claim the private polling in the state suggests the situation is not as bad as it appears.

Like O'Dwyer, Keenan pointed to family reasons for quitting, saying “I am just not prepared to be an absent dad and I want to be around more for my own family”.

“Over the Christmas break, it became very clear to me personally that times have changed … When I was first elected 15 years ago, my first child had not yet been born. I have been an absent father in the lives of my children and now is the time for this to stop. With a newborn child – our family’s fourth – it is unworkable for my family.”

O'Dwyer, Scullion and Keenan remain in their portfolios until the election, making them effectively lame ducks in their areas.

Meanwhile Scott Morrison has met Craig Laundy, who holds the very marginal Sydney seat of Reid, to try to persuade him to run again.

Laundy, a former minister who was very close to Malcolm Turnbull, has been keeping the Liberal party on tenterhooks for months about whether he will stand. Asked whether he had urged Laundy to run, Morrison told reporters on Saturday:“These are matters for Craig and his family and at present he is continuing forward”.

Scullion, 62, told a Saturday news conference he was “retiring” and had no plans for his future. “I’m going to eat more mud crabs, catch more barramundi, shoot more wild pigs.”

Keenan, 46, asked about his future at a news conference where he appeared with his wife Georgina, said: “I think there’s probably a wealth of opportunity but we’ll sit down in a few months’ time and work through all of that.”

Despite the fact she says she intends to run again, speculation continues about whether former Liberal deputy leader Julie Bishop will recontest her safe WA seat.