We’ve known for a while that honey bees are smart cookies. They have excellent navigation skills, they communicate symbolically through dance, and they’re the only insects that have been shown to learn abstract concepts.

Honey bees might also add the title of art connoisseur to their box of tricks. In part one of ABC Catalyst’s The Great Australian Bee Challenge, we see honey bees learning to tell the difference between European and Australian Indigenous art in just one afternoon.

Does this mean honey bees are more cultured than we are?

Perhaps not, but the experiment certainly shows just how quickly honey bees can learn to process very complex information.

How the experiment worked

At the centre of each of the paintings was placed a small blue dot. To make the difference between the artists meaningful to the honey bees, every time they landed on the blue dot on a Marawili painting they found a minute drop of sugar water. Every time they visited the blue dot on a Monet painting, however, they found a drop of dilute quinine. The quinine isn’t harmful, but it does taste bitter.

Having experienced each of the Monet and Marawili paintings the bees were given a test. They were shown paintings by the two artists that they had never seen before. Could they tell the difference between a Marawili and a Monet?

All the trained bees clearly directed their attention to the Marawili paintings.

This experiment was a recreation of a study first conducted by Dr Judith Reinhard’s team at the University of Queensland. In the original study, Reinhard was able to train bees to tell the difference between paintings by Monet and Picasso.

Read more: Are they watching you? The tiny brains of bees and wasps can recognise faces

Bees are quick to learn

This kind of work does not show bees have a sense of artistic style, but it does show how good they are at learning and classifying visual information.

Different artists – be they Marawili, Monet or Picasso – tend to prefer different forms of composition and structure, different tones and different pallets in their art. We describe this as their distinctive style. These styles are recognisable to us, even if most of us would be hard pressed to describe exactly what makes a Marawili different from a Monet.

When the honey bees were trained on the paintings, every Monet they visited was a bitter experience, while every Marawili was sweet. This motivated the bees to learn whatever differences best distinguished the set of Marawili paintings from the set of Monets.

Bee colour vision is excellent, if different from ours. Bees can see ultraviolet wavelengths of light, but not red. Bees can pick up structure and edges in paintings by zipping quickly back and forth in front of them to detect abrupt changes in the brightness of an image.

In our experiment, bees could detect enough differences between the Marawili and Monet paintings to learn to tell them apart. The bees were not memorising the paintings; instead they were learning whatever information best distinguished a Monet from a Marawili. They could then maximise their collection of sugar, and avoid any bitter surprises.

Read more: Bees get stressed at work too (and it might be causing colony collapse)

Similarities between art and flowers

This experiment taps into a highly evolved honey bee skill. Bees did not evolve to differentiate between artists, but their survival depends on learning to tell which flowers are most likely to offer the best pollen and nectar they need to feed their hive.

Because of this, bees have evolved the ability to very quickly process complex and subtle visual information. These learning skills are on display when bees forage on flowers. Bees quickly learn to pick up on the subtlest distinction between fresh and older flowers, be it colour, odour or texture, which can betray the blooms that are most likely to contain a drop of nectar. 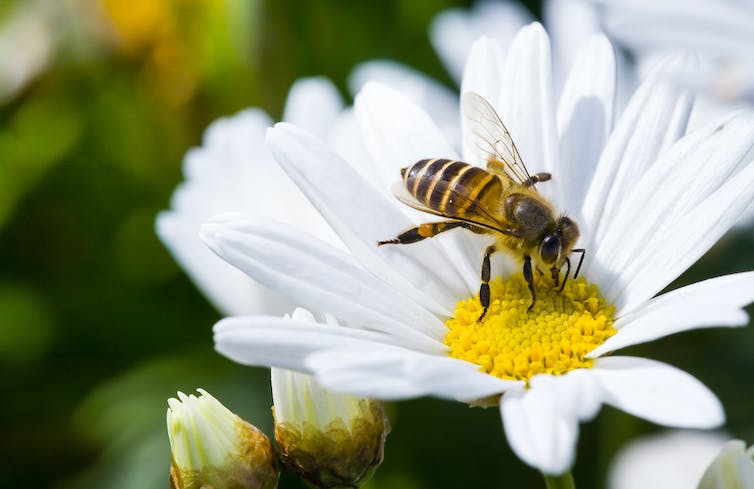 A bee lands on a daisy flower.

Honey bees break any stereotypes we may have that insects are dumb, instinct-driven animals. They have an intelligence that is very different from ours, but one that has evolved to be fit for the task of a bee doing what a bee has to do.

It is hard not to admire such clever and discriminating creatures.

Part two of the ABC’s The Great Australian Bee Challenge airs on the 5th February.