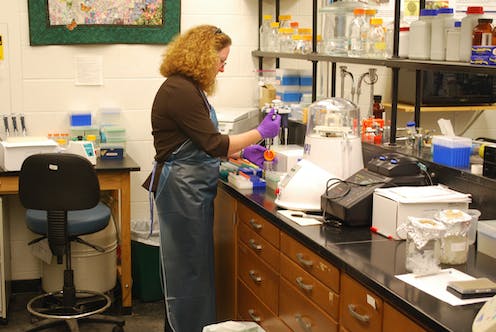 In our fast-paced modern world there is an expectation that scientific breakthroughs occur quickly and efficiently.

We are bombarded with headlines hyping new findings: Scientists “find cure for cancer which will be available within A YEAR”.

Many scientists know how unrealistic such claims are.

My new study provides data confirming that ground-breaking research takes time, and that the basic research underpinning it is typically overlooked or under-valued.

During my undergraduate degree I was fascinated to learn that cutting-edge molecular biology techniques – those used for manipulating proteins, DNA and other molecules – come from nature. In this paper I analysed the development of eight important molecular techniques, and showed they all were developed from basic biological research.

Scientific breakthroughs do not happen overnight

I identified that the major breakthroughs in molecular technology take on average a quarter of a century from basic biological research to the practical payoff. This time frame is a lot longer than any election cycle or the funding period for a research project.

The long lead time before the payoff means it is difficult to calculate the exact benefit of funding basic biological research. But basic research has a major impact.

A loose estimate suggests that the return on investment of funding basic research is between 20-60% per year! In Australia, every $1 invested into our National Health and Medical Research Council returns $3.20 in health and economic benefits.

Scientific glory is not bestowed upon basic research

I found the basic research that led to the development of new and important molecular technologies is not well recognised by the scientific community.

Basic research findings are not favoured by the science publication model. When you compare scientific articles describing basic research to applied research, the former is less likely to be published in high-profile journals or to be highly cited.

This is an important point, because scientific articles are key to career progression in science. Scientists who dedicate their careers to basic research make vital contributions to science but find it harder to obtain funding and have fewer career advancement opportunities.

Read more: Predicting who will publish or perish as career academics

Molecular technologies transform the world, and that is why the eight case studies have all eventually been linked with the awarding of Nobel Prizes (or are expected to be, in the case of CRISPR-Cas).

However, I found that the researchers who conduct basic research are less likely to be awarded the Nobel Prize or the relevant patents for the development of these molecular biology techniques.

We need to ensure the contributions of basic research scientists are recognised.

Read more: Science can be beautiful, but please don't call it basic

If basic biological research had never been pursued by scientists, then today’s world would be a very different and scarier place.

For instance, most of our current advances in human health would never have occurred. Consider the following examples:

These molecular technologies are also powerful research tools that are critical for the progress of further biomedical research, such as modelling complex human diseases and understanding the effect of diabetes on blood vessels.

Further, these molecular technologies have enabled many other aspects of our modern world: they are crucial for agriculture, have led to entirely new industries and also created numerous jobs.

Basic research has major impacts on society, is worthy of investment, but is chronically underfunded.

It’s important that funding bodies have a realistic understanding of the time frame for basic research. Some appear to be investing in research only when it has a good prospect of being useful – in the sense that it will provide quick returns.

Scientists are also increasingly pressured to obtain funding from non-government sources such as industry.

Read more: With federal funding for science on the decline, what's the role of a profit motive in research?

We need a new investment approach from government funding agencies. The best strategy for high-risk ventures, such as basic research, is to provide stable funding to a wide variety of projects to diversify the risk. If we cast a wider net, we ensure we will always catch one of these “big fish”.

Funders can think of themselves as angel investors who are investing in a portfolio of start-up businesses (another type of venture that is high risk but also high reward).

The expectation of government funding agencies needs to be that most investments in basic research will not provide a return on investment. Data suggests that for start-up businesses, the failure rate is as high as 60%.

A few projects will return what was invested into them. But some research projects will be priceless scientific breakthroughs – these are known to occur with some regularity. Our modern world is built upon them.

If funding agencies are not consistently funding today’s basic research projects, then the revolutionary technologies of tomorrow will never be developed.