On October 20 2018, US President Donald Trump announced he intends to withdraw from the Intermediate-Range Nuclear Forces Treaty (INF) – an arms control treaty with Russia that contributed to the end of the Cold War.

Secretary of State Mike Pompeo confirmed this decision last week, while Trump reiterated his commitment to withdrawing from the treaty in his State of the Union address yesterday.

Russia followed suit and reports say it is aiming to create new land-based missiles within the next two years. Reports also say the US is allocating funds for the research and development of such missiles.

So, what is the INF Treaty? And will its collapse lead to an increase of global nuclear tensions that marked the Cold War?

What is the INF?

The INF Treaty took seven years to negotiate, contributed to the end of the Cold War and ushered in three decades of strategic stability.

US President Ronald Reagan and Soviet General Secretary Mikhail Gorbachev signed the treaty on December 8 1987 to give effect to their declaration that “a nuclear war cannot be won and must never be fought”.

The treaty prohibited the development, testing and possession of ground-launched cruise and ballistic missiles with a range of 500km to 5,500km, whether armed with nuclear or conventional warheads.

A joint statement from Reagan and Gorbachev noted:

This treaty is historic both for its objective – the complete elimination of an entire class of US and Soviet nuclear arms – and for the innovative character and scope of its verification provisions. 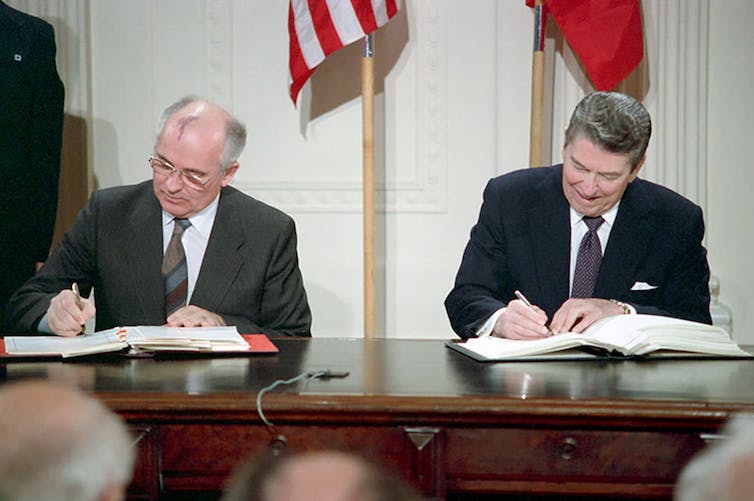 Reflecting the dominant Cold War architecture of nuclear arms control, the INF Treaty was bilateral. US National Security Adviser John Bolton, writing in 2011 as a private citizen, conceded the treaty had successfully “addressed a significant threat to US interests”. The threat was a surprise Soviet/Russian nuclear attack in Europe using missiles in the 500-5,500km range.

But the arms control architecture began fraying when US President George W. Bush pulled out of the Anti-Ballistic Missile (ABM) Treaty in 2001. Signed in 1972, the ABM controlled systems designed to counter “strategic” ballistic missiles, such as intercontinental ballistic missiles (ICBMs).

With the INF Treaty now dead and another arms control treaty, New Start, set to expire in 2021, the world will be left without any limits on the two major nuclear arsenals for the first time since 1972.

What now, for Europe?

Since 2014, under the Obama administration, Washington has accused Russia of deploying nuclear-capable ground-launched missiles with a 2,000km range (the SSC-8) in Europe that are non-compliant with INF Treaty obligations.

The US decision to pull out of the treaty will deepen the strains in the North Atlantic Treaty Organisation (NATO). Baltic countries insist Russia’s violations of the INF Treaty demand robust diplomatic and military counter-measures. The UK has lined up firmly behind Washington, blaming Russia for the breakdown.

But Germany’s foreign minister, Heiko Maas, urged Washington to consider the consequences of withdrawal for Europe and for the future of nuclear disarmament. And the EU foreign policy chief, Federica Mogherini, said:

The INF contributed to the end of the Cold War and constitutes a pillar of European security architecture.

NATO stands to lose more from the INF Treaty collapse than Russia. Russia will be able to move ahead rapidly with the development and deployment of short and medium-range ground-launched nuclear-capable missiles. But, unlike in the 1980s, the US would face difficulty in finding allies in Europe prepared to station such missiles on their territory.

Also, would the host countries have a voice or veto on launching them and in choosing targets?

What about the Asia-Pacific?

In addition to alleged Russian violations, the US exit is motivated by China’s growing challenge to US dominance in the Pacific. China and North Korea have been developing missile-delivery capabilities.

Read more: North Korea may not yet have a long-range missile, but its progress is worrying

“To reduce the threat from INF-range missiles,” Bolton concluded back in 2011, “we must either expand the INF Treaty’s membership or abrogate it entirely so that we can rebuild our own deterrent capabilities.” Trump has done the latter.

As a non-signatory, China is unconstrained by INF Treaty limits. About 95% of its missiles are in the prohibited range. This enables it to target US ships and bases from the mainland by relatively inexpensive conventional means.

Without INF restrictions, the US could develop and station ground-launched intermediate-range cruise missiles across the Asia–Pacific, which would force Beijing to divert significant military resources to defend its homeland.

China’s nuclear stockpile has remained relatively stable over many years despite the fluctuations in the Russian and US numbers. It is below 300, compared to nearly 7,000 and 6,500 Russian and US warheads, respectively.

This signifies a policy of deliberate restraint in China despite substantial growth in economic and technological capability since its first nuclear test 55 years ago.

The collapse of the INF Treaty and deployment of China-specific US missiles could compel China to institute counter-measures – such as rapidly expanding its warhead numbers and missile-delivery systems – to protect vital security interests, including nuclear assets deep in its interior. 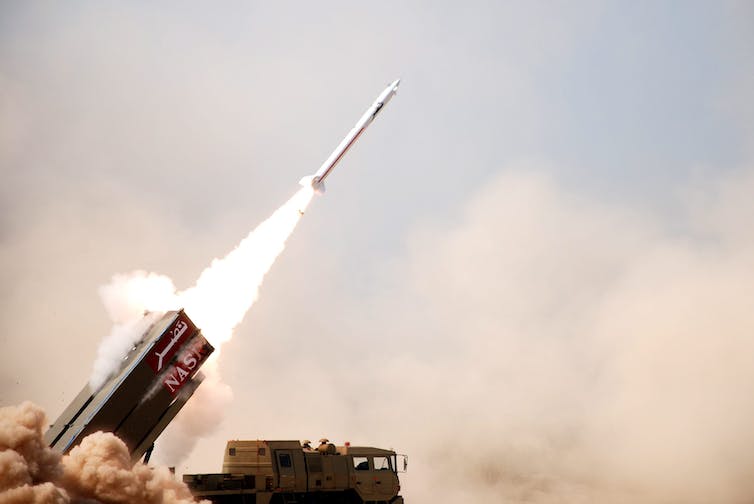 Both Pakistan and India have under 150 nuclear weapons each (the Pakistani military released this image in Febuary 2013, showing a missile capable of carrying strategic and conventional weapons). Inter Services Public Relations/AAP

China’s response in turn may trigger re-adjustments to India’s doctrine of credible minimum deterrence and could produce matching re-adjustments by Pakistan. The nuclear arsenals of both these countries is presently limited to under 150 each.

In a worst-case scenario, China, India and Pakistan could engage in a sprint to parity with the US with a rapid expansion of warhead numbers and missile-delivery capabilities, and perhaps even move to keeping a stock of nuclear weapons on high alert just like Russia and the US.

However, economic and technological limitations will constrain India and Pakistan’s ability to engage in an open-ended nuclear arms race.

The sensible alternative would be to begin urgently multilateralising the Cold War bilateral structure of nuclear arms control regimes. This means involving more countries than just Russia and the US in arms control treaties, and in particular involving China. Chinese nuclear expert Tong Zhao’s conclusion holds for the whole world, not just China:

… the era of relying on the US-Russia bilateral arms control structure is at its end.

Meanwhile, thanks to Donald Trump and John Bolton, we shall continue to live in interesting times.