The world’s first known author is widely considered to be Enheduanna, a woman who lived in the 23rd century BCE in ancient Mesopotamia (approximately 2285 – 2250 BCE). Enheduanna is a remarkable figure: an ancient “triple threat”, she was a princess and a priestess as well as a writer and poet.

The third millennium BCE was a time of upheaval in Mesopotamia. The conquest of Sargon the Great saw the development of the world’s first great empire. The city of Akkad become one of the largest in the world, and northern and southern Mesopotamia were united for the first time in history.

In this extraordinary historical setting, we find the fascinating character of Enheduanna, Sargon’s daughter. She worked as the high priestess of the moon deity Nanna-Suen at his temple in Ur (in modern-day Southern Iraq). The celestial nature of her occupation is reflected in her name, meaning “Ornament of Heaven”.

Enheduanna composed several works of literature, including two hymns to the Mesopotamian love goddess Inanna (Semitic Ishtar). She wrote the myth of Inanna and Ebih, and a collection of 42 temple hymns. Scribal traditions in the ancient world are often considered an area of male authority, but Enheduanna’s works form an important part of Mesopotamia’s rich literary history. 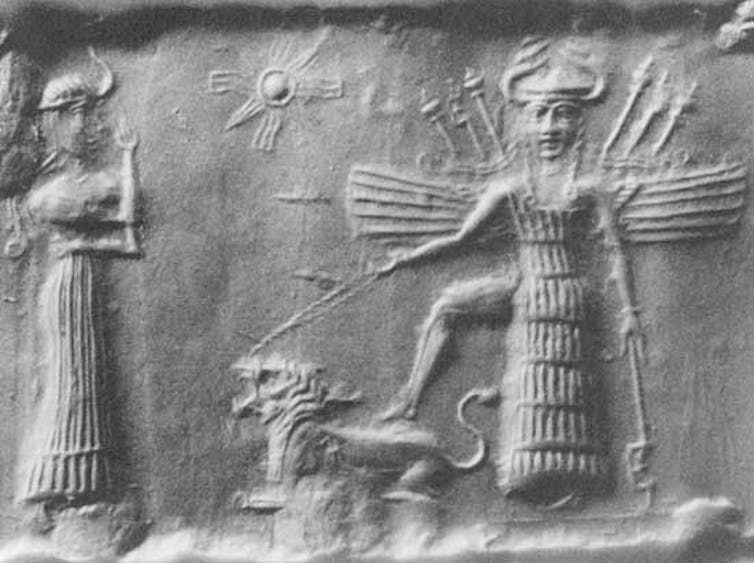 Enheduanna’s status as a named poet is significant given the anonymity surrounding works of even earlier authors. Yet she is almost entirely unknown in the modern day, and her achievements have been largely overlooked (a notable exception is the work of Jungian analyst Betty De Shong Meador). Her written works are deeply personal in subject, containing numerous biographical features.

Enheduanna’s cycle of temple hymns concludes with an assertion of the work’s originality and its authorship:

The compiler of the tablets was En-hedu-ana. My king, something has been created that no one has created before.

While clearly asserting ownership over the creative property of her work, Enheduanna also comments on the difficulties of the creative process — apparently, writer’s block was a problem even in ancient Mesopotamia.

In her hymns, Enheduanna comments on the challenge of encapsulating divine wonders through the written word. She describes spending long hours labouring over her compositions by night, for them then to be performed in the day. The fruits of her work are dedicated to the goddess of love.

Enheduanna’s poetry has a reflective quality that emphasises the superlative qualities of its divine muse, while also highlighting the artistic skill required for written compositions.

Her written praise of celestial deities has been recognised in the field of modern astronomy. Her descriptions of stellar measurements and movements have been described as possible early scientific observations. Indeed, a crater on Mercury was named in her honour in 2015.

Enheduanna’s works were written in cuneiform, an ancient form of writing using clay tablets but have only survived in the form of much later copies from around 1800 BCE, from the Old Babylonian period and later. The lack of earlier sources has raised doubts for some over Enheduanna’s identification as the author of myths and hymns and her status as a religious official of high rank. However, the historical record clearly identifies Enheduanna as the composer of ancient literary works, and this is undoubtedly an important aspect of the traditions surrounding her.

Aside from poetry, other sources for Enheduanna’s life have been discovered by archaeologists. These include cylinder seals belonging to her servants, and an alabaster relief inscribed with her dedication. The Disk of Enheduanna was discovered by British archaeologist Sir Charles Leonard Woolley and his team of excavators in 1927. 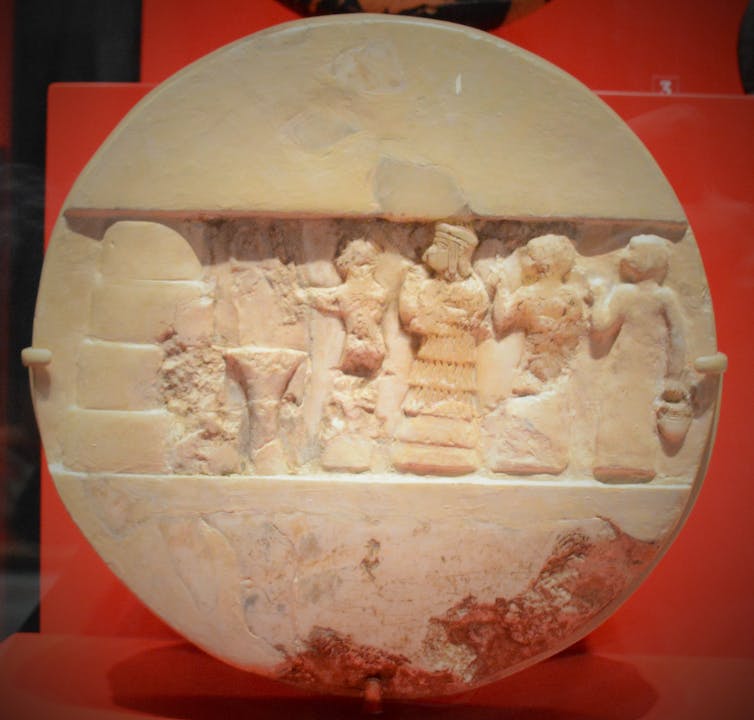 The Disk of Enheduanna. Zunkir/Mefman00/Wikimedia Commons, CC BY

The Disk was discarded and apparently defaced in antiquity, but the pieces were recovered through excavations and the scene featuring the writer successfully restored. The scene depicts the priestess at work: along with three male attendants, she observes a libation offering being poured from a jug.

Enheduanna is situated in the centre of the image, with her gaze focused on the religious offering, and her hand raised in a gesture of piety. The image on the Disk emphasises the religious and social status of the priestess, who is wearing a cap and flounced garment.

Enheduanna’s poetry contains what are thought to be autobiographical elements, such as descriptions of her struggle against a usurper, Lugalanne. In her composition The Exaltation of Inanna, Enheduanna describes Lugalanne’s attempts to force her from her role at the temple. 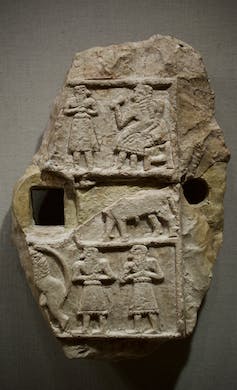 Enheduanna’s pleas to the moon god were apparently met with silence. She then turned to Inanna, who is praised for restoring her to office.

The challenge to Enheduanna’s authority, and her praise of her divine helper, are echoed in her other work, such as in the myth known as Inanna and Ebih.

In this narrative, the goddess Inanna comes into conflict with a haughty mountain, Ebih. The mountain offends the deity by standing tall and refusing to bow low to her. Inanna seeks help from her father, the deity Anu. He (understandably) advises her against going to war with the fearsome mountain range.

Inanna, in typically bold form, ignores this instruction and annihilates the mountain, before praising the god Enlil for his assistance. The myth contains intriguing parallels with the conflict described in Enheduanna’s poetry.

In the figure of Enheduanna, we see a powerful figure of great creativity, whose passionate praise of the goddess of love continues to echo through time, 4000 years after first being carved into a clay tablet.