2018 was a good year for cinema but this is not reflected in the Oscar nominations for Best Picture. This year’s nominees are notable mainly for their mediocrity. There are, of course, a couple of exceptions.

Yorgos Lanthimos’ most recent film, The Favourite, is an outlandish black comedy following the machinations of two ladies in Queen Anne’s court as they try to win and maintain Anne’s affection at each other’s expense. Rachel Weisz, as Lady Sarah, and Emma Stone, as Abigail, the ingenue attempting to replace Sarah at Anne’s side, are clearly enjoying themselves. But Olivia Colman, whose extraordinary comic timing is once again on display, steals the show. She manages to portray Queen Anne as completely inept, and yet with a hint of pathos that enables the viewer to be moderately sympathetic towards her. The whole thing plays like a delirious parody of royalty, and combines the delightful nihilism of Lanthimos’ earlier The Lobster – also starring Weisz and Colman (and a better film than The Favourite) – with the lurid sensationalism of something like Paul Verhoeven’s Showgirls. This is certainly the most engaging of the nominees, and receives my vote for Best Picture.

Spike Lee’s recent film marks a return to form for the director who, despite his legendary status in Hollywood, has always been hit and miss. The story on which the film is based – an African American police officer from Colorado Springs infiltrates the David Duke-led Ku Klux Klan – is so bizarre that it alone would be enough to make a fascinating film. Add to this the effortlessness of Lee’s craft and the excellent performances – including Topher Grace as David Duke – and the result is a very good comedy. Still, the premise raises some ideological questions, as does the film’s claim that it is more than just a rollicking tale - evident in a closing credit sequence that attempts to situate this story in the contemporary milieu of racial tension in the USA. The notion that a policeman – whose role, by definition, is to defend the city (the polis) through the maintenance of power relations amongst its inhabitants – could be a progressive political activist is absurd. 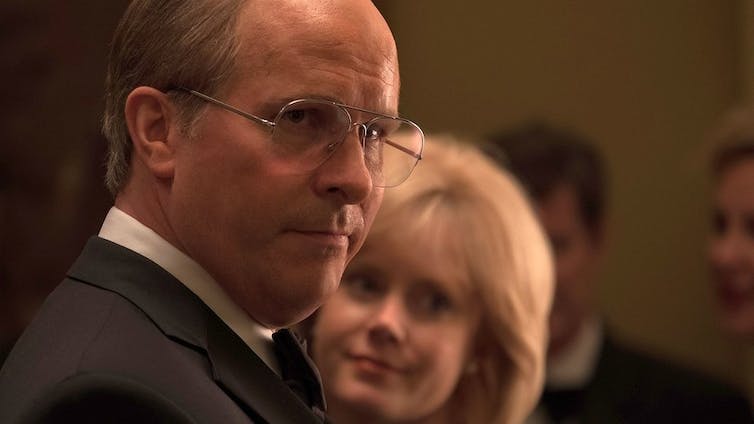 Vice, in its combination of political critique and dramatic reenactment, recalls The Big Short, the earlier film from writer-director Adam McKay (of Anchorman fame) that featured many of the same cast. Though not as impressive as The Favourite and BlacKkKlansman, Vice is, at least, formally ambitious. Ostensibly a biopic of Dick Cheney (Christian Bale) and his rise to power, it plays like a critical essay about the systemic and personal abuses of the American right in the late 20th and early 21st centuries. In an industry dominated by sentiment and melodrama, it is nice to see a biographical film attempting a more intellectually engaged approach to its subject. At the same time, its critique is fairly obvious – the atrocities of Guantanamo Bay, Abu Ghraib etc., are widely recognised as such – and its tone is, at times, rather smarmy. Still, it offers some insight into an often overlooked figure in the corridors of American power.

Laborious and unsatisfying, Alfonso Cuarón’s latest film – made for Netflix – plays like an homage to great European directors like Antonioni, Rossellini, and Fellini. But one of these masters Cuarón is not. The story follows the difficulties encountered by an Indigenous American maid living with a middle class family in Mexico City in the early 1970s as she falls pregnant to an unwilling father who leaves her to fend for herself. A few things happen – not that much – but this isn’t really the problem (after all, Tarkovsky made some excellent films in which little happens slowly). Each image feels painfully rendered, we can sense the presence behind every long tracking sequence and detailed domestic tableau, and the result completely disengages us from the drama on screen. Given we’ve seen it all before, done more effectively and with much more style, Roma feels a little redundant. This is the case even at the visual level, with the flat Netflix aesthetic failing to endow Cuarón’s panoramic vision with any clarity or depth. This feels like a long film-school exercise, and provides further evidence that shooting something in black and white doesn’t automatically endow it with artistic merit. 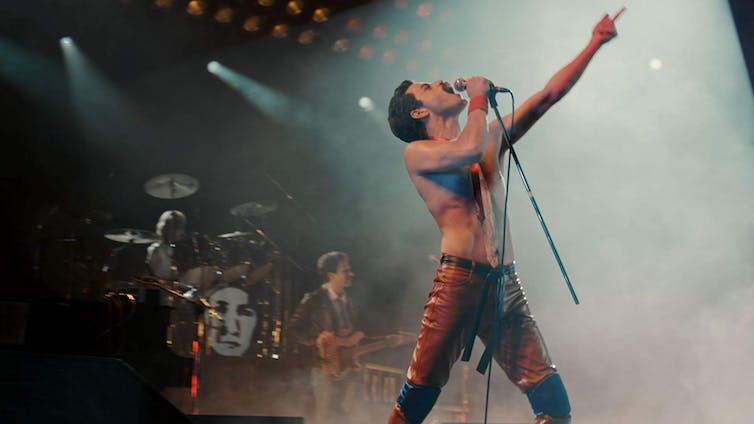 It is very strange that a film like Bohemian Rhapsody would be nominated for Best Picture. Don’t get me wrong, it is an enjoyable film, and features rousing renditions of some of Queen’s most popular anthems. Yet director Bryan Singer (The Usual Suspects, X-Men) offers nothing of any note here. Rami Malek, who is good in the TV series Mr. Robot, seems out of his depth, and his efforts to transform into singer Freddie Mercury are ever visible. This is the kind of film one might watch on a plane and find mildly inspirational – it offers the rare spectacle of artists succeeding, a fantasy seldom realised in real life – only to forget it all by the time you are collecting your luggage. On a more negative note, it is at times moralistic in its vision of sexuality and desire, depicting Mercury’s time in the Berlin queer scene as decadent and destructive. Mercury is redeemed when he enters a monogamous relationship and reunites with his heterosexual band mates, all in time for Live Aid.

A Star is Born 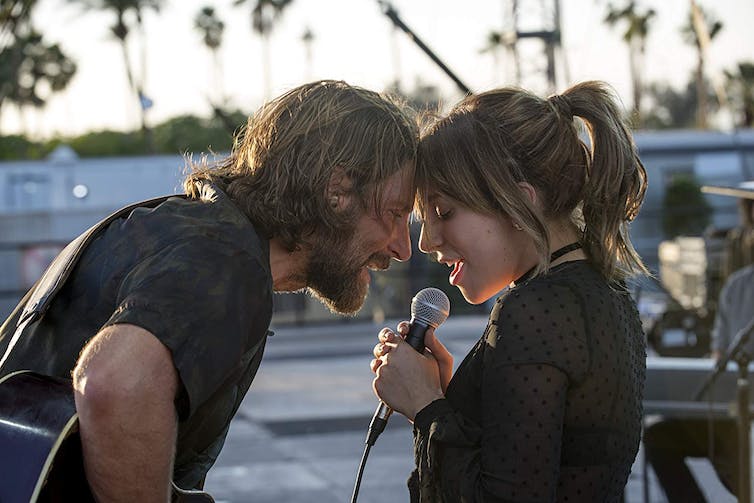 Like Bohemian Rhapsody, A Star is Born is a sentimental melodrama about a singer’s rise to fame - in this case, in tandem with the increasing alcoholism and general decline of her mentor, partner, and husband. Lady Gaga plays Ally, the ingenue who wins the heart of grizzled rocker Jack (played by Bradley Cooper, who also directs the film). Lots of people like Lady Gaga, which might account for this film’s popularity, but she, along with Cooper, seem to be straining hard to capture the viewer’s attention. They both lack the onscreen magnetism possessed by the two stars of an earlier version of the film, Barbra Streisand and Kris Kristofferson. That said, there is nothing very wrong with this film. It is engaging, in the sense that one watches it, doesn’t walk out of the cinema, and passes a couple of hours pleasantly – but there is also nothing notable here at a cinematic or technical level. 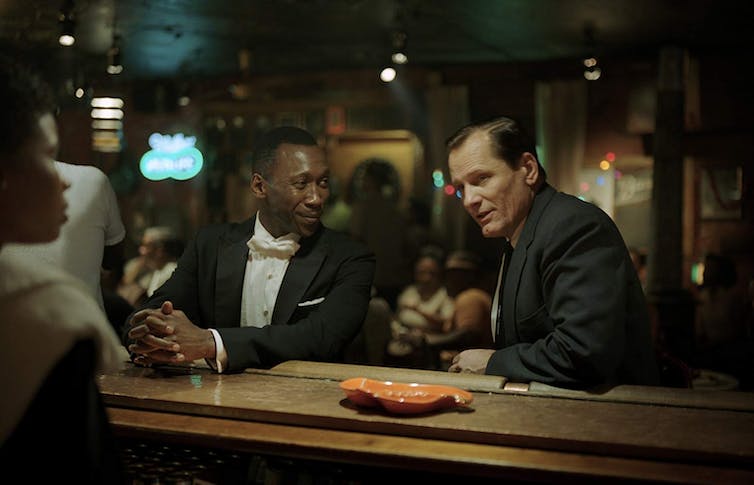 Green Book is also a watchable, seamless film, anchored around the charisma of its two leads, Viggo Mortensen and Mahershala Ali. The narrative follows popular pianist and entertainer Don Shirley (Ali) as he tours the segregated South with Tony Lip (Mortensen), a hardboiled East Coast Italian, as his driver and bodyguard of sorts. The title comes from the “Green Book” they use to book appropriate (black-friendly) accommodation and dining. It is impossible to remain unmoved during scenes in which the talented Shirley is asked to use an outdoor toilet because he is black, and refused admittance to the restaurant of an establishment in which he is performing, and the relationship that develops between Tony and Shirley is an effective emotional centrepiece for the film. However, its essentially paternalistic approach to race relations – it seems to take the magnanimity of Lip and his family to affirm Shirley’s humanity – and its unbridled sentimentality will raise the eyebrows of anyone with more than a rudimentary knowledge of recent American history and culture. But maybe I am expecting too much from director Peter Farrelly, the writer of inane comedies like Me, Myself and Irene, Shallow Hal and Stuck on You. 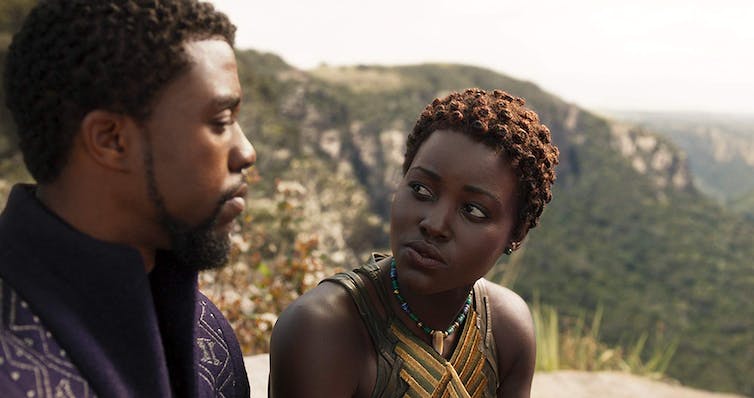 Perhaps the most disappointing of the year’s nominees, Black Panther is an average Marvel film – better than some (Spider-Man: Homecoming) and worse than others (Thor: Ragnarok). Its action sequences - critical to the success of a superhero film - are quite impressive, and the design is colourful, but the narrative is uneven and awkwardly paced, involving a revelation of identity that isn’t really a revelation at all, which occurs at an arbitrary place in the narrative. The story follows two conflicting “panthers”, one good (Black Panther, played by Chadwick Boseman) and one bad (Killmonger, played by Michael B. Jordan) as they battle for control of the (mystically presented) nation Wakanda and its valuable resources. The film is rife with ideological contradictions in its presentation of the “good” panther as following a liberal model of black activism, and the “bad” panther as following a militant model. It seems to suggest that politics can occur without violence (the liberal dream) without recognising perhaps the chief insight of the 20th century – that politics is always violent, in its management of the city, in its determination of friend and enemy, and in its administration of the human. Furthermore, historically, liberalism, as Domenico Losurdo convincingly demonstrates in Liberalism: A Counter-History was built upon the back of slavery.

According to virtually every aesthetic criterion, Luca Guadagnino’s retelling of Dario Argento’s famous horror film, Suspiria, is one of 2018’s strongest films. It is stylish - incorporating several technical innovations - with lavish cinematography and design that, nonetheless, is effectively counterpointed with the cold edge of late 1970s Berlin. The narrative interweaving of the horror story of young Jessica (Dakota Johnson) attending a dance academy run by witches with the political turmoil in West Germany involving the Red Army Faction, lends a historical weight lacking (for better or worse) from Argento’s version. The measured pace of the first three quarters of the film explodes into a dazzlingly colourful phantasmagoria of blood and bodies in the final extended sequence, with a surprising – and satisfying – last twist. The fact that a film as interesting as Suspiria (including Thom Yorke’s hypnotic score) can be completely eschewed by the Academy is testament to the absurdity – and arbitrariness – of the whole Oscars process.

Similarly, American Animals, a hilarious, real-life dramatisation of an art heist that incorporates the actual people portrayed into the scenes alongside actors playing them, is another standout from 2018. There is no American film more intellectually and existentially engaging than American Animals - yet it didn’t receive a single nomination.

David Gordon Green’s new Halloween film is also exceptionally intense, and, arguably, one of the great slasher films. Mind you, horror films, like action films, are rarely nominated for Best Picture Oscars, unless they’ve been made by William Friedkin (The Exorcist, The French Connection)!