For the past century, the curator has been the deciding factor in what is shown by museums and galleries, reassuring audiences of the importance of what they are seeing. While acknowledging other commercial and audience drivers, the centrality of curatorial decision-making has been sacrosanct.

But when the curatorial team from the Art Gallery of Western Australia embarked on an epic quest to document the art of the Kimberley region in the state’s north west, they abandoned this idea of a single authorial voice in favour of a new model of partnership and exchange. Artists and art centres in the Kimberley were invited to help shape the Desert River Sea project.

This is, after all, an area with a 50,000-year history of continuous cultural engagement, made up of over 200 communities and 30 language groups. Since the 1980s, it has been an important hub for contemporary art. 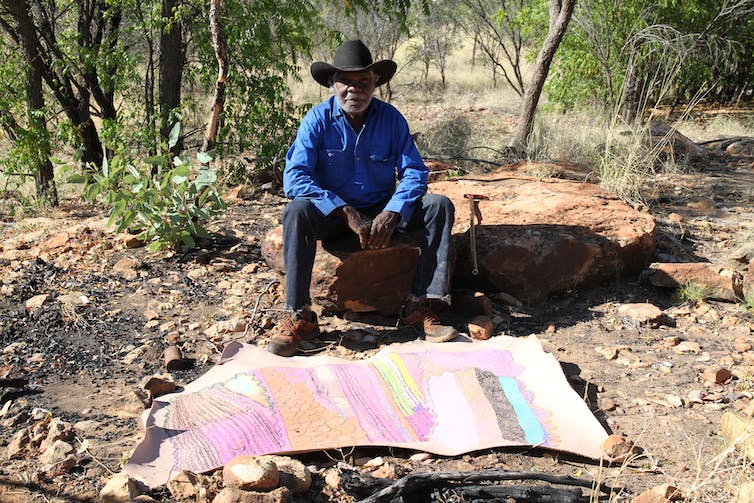 So what has the Desert River Sea project achieved and how does it differ from other survey exhibitions of Aboriginal art that have populated galleries in Australia, North America, and Europe?

After six years of travel, conversations and exchange, coordinating curators Carly Lane and Emelia Galatis have overseen a massive project that culminated with eight major commissions. 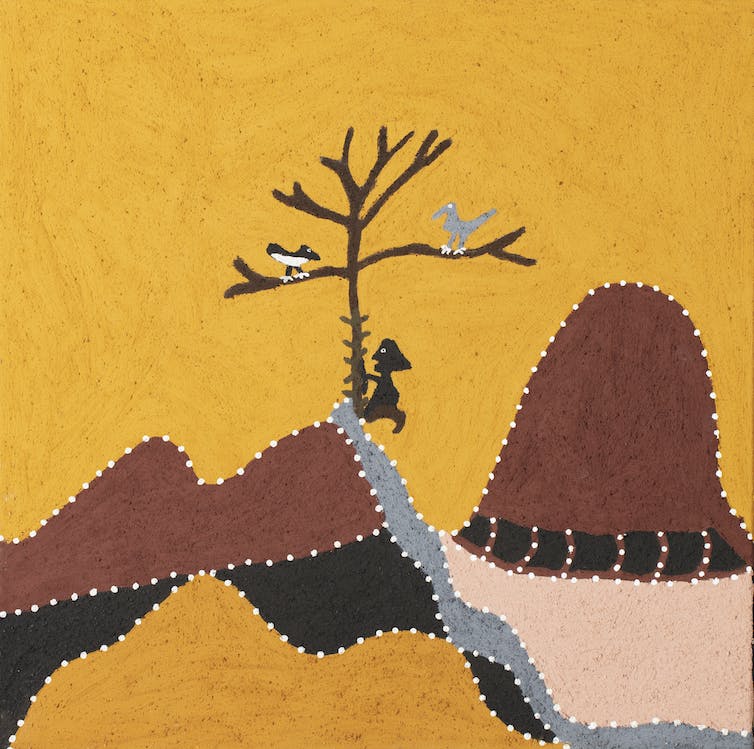 Some communities used the commissioning funds to revive ceremonies and teach younger members the correct protocols for “painting up” before rituals. Garry and Darrell Sibosado from Lombadina, created a stunning Rainbow Serpent (Aalingoon) from carved and incised pearl shell.

At the Kira Kiro Art Centre in Kalumburu, the focus was on showcasing the works of Betty Bundamurra and the late Mrs. Taylor. These two elders document their country with an expressive armoury of lively dots and brush marks in a rich, ochre palette.

The final celebration of what has been achieved by the 40 artists within the parameters of these commissions, is presented in a compelling and vibrant exhibition, on show as part of the Perth Festival. It is a highly condensed tour through the vast landscape of the northwest, literally from the sea, through the rivers and into the desert.

Each commission has its own area in the expansive gallery. But through multiple lines of sight, many enchanting connections are made and some surprising juxtapositions are encountered.

From Eva Nargoodah’s bush clothes fabricated from Dingo Flour bags, past Mrs. Taylor’s array of scintillating dots and shapes evoking fruitful abundance and onto Mervyn Street’s extraordinary carved and painted cow hides, it is an exhilarating journey that encapsulates the diversity of approaches to recording life in the Kimberley. 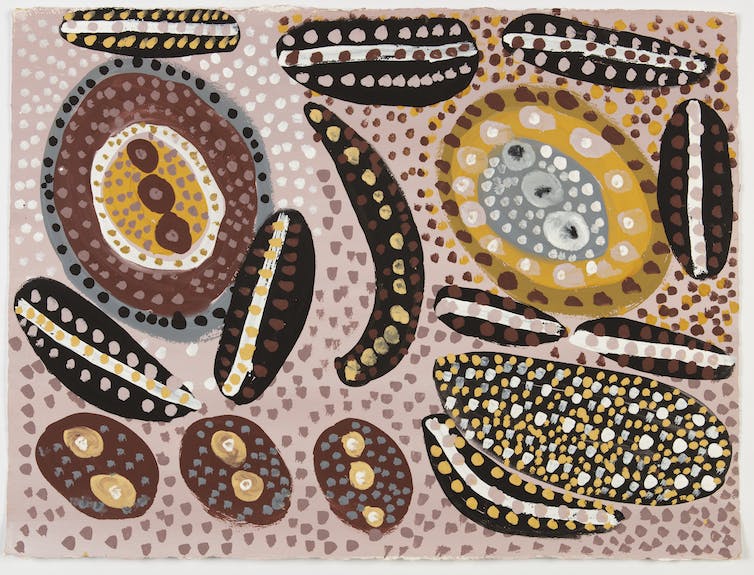 The hides that Street carefully shaves and then paints to describe the heifers and bulls he knows so well from years of mustering and branding are a stand out example of the synthesis between people and place this show encapsulates.

“I have been around a lot of places, and these memories are all in my head,” he explains. “I use art to tell my history … I have to keep it in my mind and share it for young generations”. 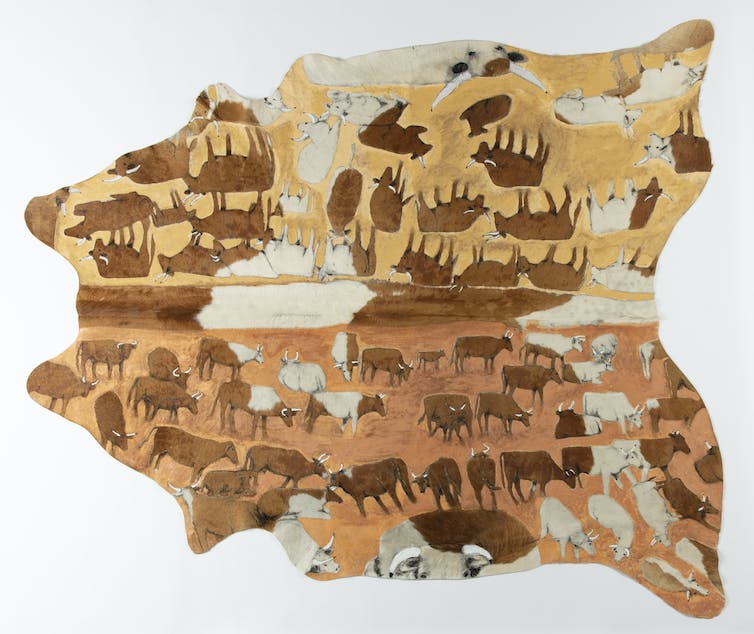 Several of the communities have created film-based works that both describe the landscape and chronicle important cultural protocols. These videos are documents of empowerment that speak eloquently about a deep connection to country and the need to maintain cultural practices as communities seek to regain sovereignty over their land.

Daniel Walbidi from Bidyadanga has created an installation depicting Wirnpa, a creation being. Constructed within the gallery, it echoes a similar work he made on the shoreline of a salt lake that was slowly swallowed up by the advancing waters. The large scale video work chronicling that process is screened on the back wall, completing the loop that links his country with this city environment. 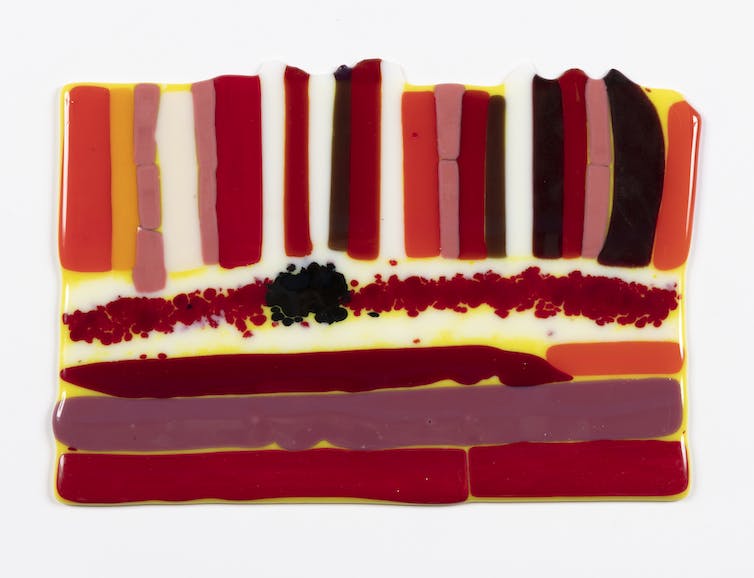 One of the most arresting series of works are the sumptuous glass panels made by the Warlayirti Artists from Balgo. These nine artists have documented the abundance of bush tucker found on country using beads, rods and sheets of coloured glass. Fused together, they form luminous panels and glow magically in the gallery.

The vibrancy of the works on show and the integrity of the outcome has only been possible because of the courageous decision to rethink the curatorial parameters of this project, allowing multiple voices to shape the outcome. Both the Gallery and its partner Rio Tinto are to be congratulated on this initiative.

Desert River Sea: Portraits of the Kimberley, is at the Art Gallery of Western Australia, until 27 May.