Many commentators have compared Labor’s support for the Medevac legislation with the Tampa incident in late August 2001. The implication is that Labor lost the 2001 election due to Tampa, and could lose this year’s election due to Medevac.

Political commentator Katharine Murphy has said she was certain at the time Labor leader Kim Beazley “had just lost the election” after announcing Labor would vote against retrospective legislation giving the Coalition government the power to forcibly remove the Tampa from Australian territorial waters.

But are the claims that Labor lost the 2001 election due to the Tampa true? The Poll Bludger, William Bowe, kindly sent me the polling data for the 1998-2001 term, on which the historical BludgerTrack is based. BludgerTrack is a bias-adjusted poll aggregate.

I have used this data to create the graph below of the Coalition vs Labor two party preferred vote during 2001. The election was on November 10. 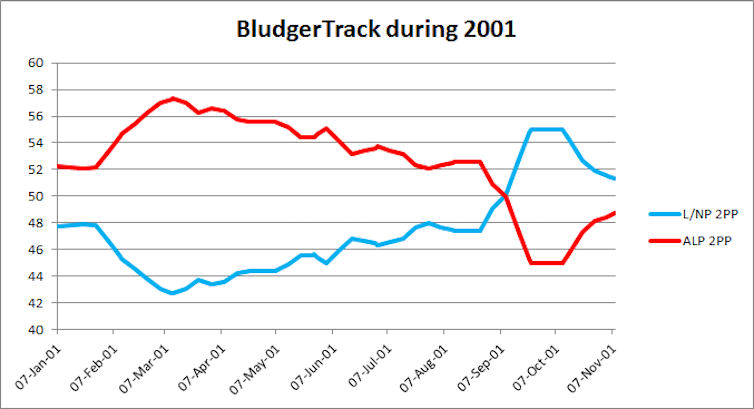 The graph shows that Labor had a massive lead in March 2001 of about 57-43, but it gradually narrowed to about 52-48 by the time Australian government involvement in the Tampa incident began on August 26. The Tampa was denied permission to dock at Christmas Island and deliver asylum seekers who had been rescued.

The Coalition received about a two-point boost from the Tampa affair to draw level with Labor. However, it had a much bigger lift from the September 11, 2001 terrorist attacks, which lifted the Coalition’s vote five points to about a 55-45 lead. As the shock of the attacks wore off, the Coalition’s vote fell back to a 51.0-49.0 victory on election day (November 10).

If the Tampa had occurred in 2001, but not September 11, other issues, such as the economy, health and education, would probably have appealed to people in the lead-up to the election more than boats. Labor could have recovered to an election-winning position. September 11 made national security a huge asset for the Coalition government at the 2001 election.

If not for September 11, Labor may have won the 2001 election. The Tampa put the Coalition into a tie with Labor, not a lead.

Analyst Peter Brent in Inside Story thinks that, given economic factors, the Coalition would probably have won the election by 51-49 without either the Tampa or September 11. You can achieve this result by drawing a line from the Coalition’s nadir in March to the election, with the assumption that the slow improvement in the polls had continued.

Read more: If Beazley had become prime minister instead of Rudd, might we have had more stable government?

However, the graph shows the Coalition’s recovery had stalled for over a month before the Tampa. Even though the September 11 shock had faded by the election, the boost it gave to the importance of the Coalition strength of national security assisted the Coalition at the election.

Labor did not lose the 2001 election because of the Tampa, and they are unlikely to lose the 2019 election because of their support for the Medevac bill. I believe the shock factor of terrorist incidents has been reduced by their frequency. There were two terrorist atrocities shortly before the 2017 UK general election, yet UK Labour performed much better than expected at that election.

While other causes, such as alleged antisemitism within Labour, have been cited, the reason these defections have happened now is Brexit. The defecting MPs are strongly opposed to their former party’s handling of Brexit, and all want a second referendum on Brexit – currently opposed by both major parties.

The Independent Group MPs have consistently voted in favour of proposals to avoid a “no deal” Brexit when the UK leaves the European Union on March 29. However, these MPs votes will not change. To avoid a no deal, either other MPs votes must change, or the major parties need to reach a compromise. The next important Brexit votes will be on February 27. The article I wrote on my personal website in January about why a no deal Brexit is a plausible scenario is still relevant.