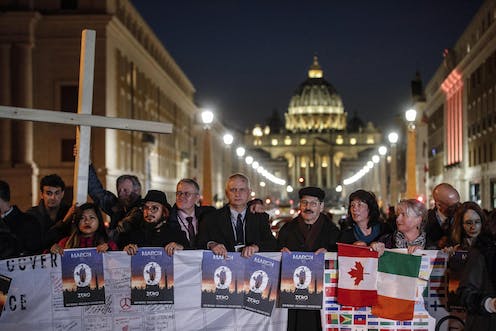 In January, I met up with an old family friend. He’s a lifelong Catholic who goes to Mass every week. He had no idea Cardinal George Pell’s trial was already done. Not as tech-savvy as some, he hadn’t caught up with the recent, open reporting from several international Catholic and other news agencies about Pell’s fate.

We talked about Pell’s poor public image, damaged by his demeanour at the Royal Commission, the seeming mean-heartedness of the Melbourne Response, his accompanying of Gerald Ridsdale into court.

Confronted with news about Pell’s guilt, my friend was shocked but had little sympathy for the cardinal. He then proceeded to tell me about the arrogance and aloofness of his local bishop. None of this, however, has led my friend to abandon his religious faith, despite enduring terrible revelations over more than two decades.

A lot will be written in the next while about what Pell’s conviction means, how Pope Francis will respond to this, and the wider crisis of sexual abuse. Already, a few steps have been taken to address the issue more systematically, the most recent of which is a meeting of senior clerics in the Vatican last week. Church critics and victims of sexual assault have already argued this is not enough.

What about Australian Catholics? How will Pell’s conviction affect them? We’re often told how disheartened and disillusioned the laity has become. That Cardinal Pell, as Vatican treasurer, is the most senior Catholic official to be found guilty may not affect ordinary Australian Catholics more than earlier scandals. But his seniority at the Vatican will place Pope Francis under more pressure than ever before. This is global news, and it’s being covered as such.

Thousands of Australian Catholics have stopped attending church in recent decades. Research conducted more than a decade ago suggests sexual abuse scandals and disagreement with the Church’s moral teachings play a part in their decision to leave.

Among those who continue to identify as Catholic, the majority remain only marginally committed to their denomination. This is especially so among the present generation of Catholic teens. The AGZ Survey, a recent national survey of Australians aged 13 to 18, found less than a fifth of Catholic teens attend Mass regularly. Even fewer (13%) think religious faith is important to their daily life.

Furthermore, Australian Catholic teens express views that are at odds with official church teaching. For instance, 86% agree “secondary schools should allow students to openly express any sexual or gender orientation” and 85% support marriage equality. It’s hard to envisage how Pell’s fall from grace could do anything but further entrench the disconnection between young Catholics and the Catholic hierarchy.

Others, typically older Catholics, like my friend, have stayed more engaged. Seeking to effect reform and change from within, the church owes them a debt of gratitude for staying true. It may be harder for the younger generations. A decade ago, I watched a group of committed Catholic teens conduct a role-playing exercise on how to reach out to nominal Catholics. One of the things they discussed at length was how to deal with tough questions about “paedo [paedophile] priests”. Witnessing them negotiate this challenge, something not of their making, was sobering.

So far, much of the Catholic hierarchy’s response to the sexual abuse crisis (including cover-ups) has been reactive, responding to secular processes such as royal commissions and criminal trials. The recent summit called by Pope Francis has been widely criticised for being long on talk and low on change. The Vatican has long turned inward and protected its own.

Read more: Why it's so hard to hold priests accountable for sex abuse

In the 1960s, the Catholic Church held a series of formal meetings, called Vatican II, that modernised one of the west’s oldest and most powerful institutions. This took place over three years and was characterised by acknowledgement that radical change from within was required.

It’s time for an equally searching investigation, one that produces genuine reform. It demands changes to Canon law, doctrine and practice, characterised by an accountability to and understanding of the world outside the church.

Ask rank-and-file Catholics what this would entail, especially young ones, and you hear about a desire for priests being allowed to marry, modern attitudes to contraception, the ordination of women and greater empowerment of the laity. Only then can the church and its people properly move forward.