What can you do with 99 seconds? Check your email? Fire off a tweet? Walk 100 metres?

For current men’s marathon world-record holder, Kenyan Eliud Kipchoge, 99 seconds is all that stands between him and the sub two-hour (or “sub-2”) marathon run.

Breaking the two-hour barrier in the men’s marathon could be the defining moment of Kipchoge’s illustrious career.

Read more: Five tips to help your kid succeed in sport – or maybe just enjoy it

But how close is he? How hard is dropping 99 seconds, really?

To find out, in a study published today in Medicine and Science of Sports and Exercise, I crunched the data on all male and female marathon world record times since 1950.

Kipchoge could break the sub-2 barrier tomorrow, but it is very very unlikely: there’s just a 2% chance of it ever happening, to be precise.

The more likely answer is that we will have to wait until May 2032 to see someone – most likely not Kipchoge – go sub-2 in an official event. By that time, the chance of someone going sub-2 increases to 10%.

But we may have to be even more patient: 2054 sees the probability of a sub-2 marathon rising to 25%.

The reason for the shifting date is that from the standpoint of statistics, there is a direct connection between the predicted date of arrival of the sub-2 moment, and its probability of happening.

But what we should remember is that, when using this average to predict the future, the average has some variation associated with it. So actually, we should probably quote the Don’s average as 99.94, within the range 71.0 to 128.8.

What these numbers mean is that if Bradman were to have played another ten test innings, then the average of those ten innings would lie, with 95% chance, within the range 71.0 to 128.8. (For the statistician in all of us, yes, that’s a confidence interval.)

Which is helpful. But what if the English skipper who faced Bradman, Norman Yardley, is playing one of those fictional next games. He cares more about what Bradman might score right now, at the crease, not over a series of ten such events.

At this point, Yardley needs what is called a “prediction interval”: the likely range of a single inning’s score (not the average over a number of innings).

Sorry Yardley. The answer is a tad demoralising: the prediction interval for Bradman’s test innings is from 0 to 343.5 runs!

In other words, with 95% likelihood, a single Bradman innings will fall anywhere in the interval 0 to 343.5 runs.

Back to the marathon, it is exactly this insight that helps us to make a more accurate point-prediction for when the sub-2 marathon will be run, leading to our May 2032 estimate (with 10% likelihood).

The table (above) shows how the men’s marathon times have been tumbling, especially in more recent years.

The neat thing about the modelling framework is that we can also calculate the likely fastest ever men’s marathon time, again at 10% likelihood. That comes in at 1:58:05 (1h 58m 5s), a prediction that turns out to be remarkably close (within seven seconds) to one made on entirely physiological grounds in 1991.

Importantly, we can also explore female marathon times in the same way.

For instance, in the analysis, the likely fastest ever women’s marathon time equates to 2:05:31 (2h 5m 31s), around ten minutes faster than the current world record, set in 2003, of Paula Radcliffe (UK). 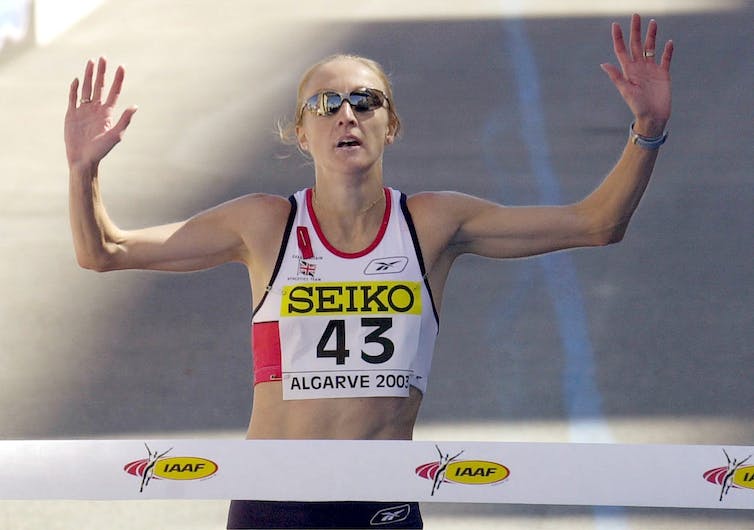 The UK’s Paula Radcliffe at a half marathon in Portugal just months after she took the world record for the full marathon in 2003. EPA/Luis Forra

But what time target would be the equivalent for women of the men’s sub-2?

Knowing the limits of male performance, we can simply calculate the distance from the male limiting time (1:58:05) to the 2 hour time, a difference of 1 min, 55 secs.

For this reason, I suggest that a reasonable choice for an arbitrary focus for elite female performance could be 130 minutes (2h 10m 0s). Let’s call it the “sub 130 minute marathon”. (Remember, the sub-2 – or sub 120 minute – barrier is itself entirely arbitrary.)

Which leads us to another important observation.

For context, the male world record mark has been improved on seven times over the same period. So where are all the female world-record marathoners?

Read more: The science of parkour, the sport that seems reckless but takes poise and skill

I don’t have a full answer to that question. But a fascinating study from 2014 of the characteristics of the best male and female marathoners in recent times gives us an important clue.

It would seem to me that there is likely a group of world-record smashing African female marathoners living somewhere on the planet today, but nobody knows who they are. Yet.