Who was the first ancient mummy wrapped up? - Jake, age 5, Swansea.

The first mummy to be wrapped up comes from the Chinchorro culture of South America, in the area of southern Peru and northern Chile. The oldest of these mummies was a person who died in 5050 BC, over 7,000 years ago. These Chinchorro mummies are 2,000 years older than the mummies in ancient Egypt!

One of these Chinchorro mummies was preserved by nature, and was not wrapped up, and it is 9,000 years old (meaning it is from 7,020 BC).

Chinchorro means “gill netters”, which is their way of fishing with nets. The Chinchorro people lived by the sea, the Atacama Coast, along the Pacific Ocean. Most of what they ate was seafood (fish and shellfish), sea birds and sometimes sea lions. They also hunted animals for meat and collected some plants, too.

Pictures of these mummies may frighten some curious kids. Parents are advised to search and look at images online before showing them to children.

This map shows you where Chile is in relation to Australia. Google Maps

These mummies have remained the same until today because the place where the Chinchorro lived was very dry, even though they lived by the ocean. Much of this area is a desert and some areas have not had rain in over 400 years!

Read more: Curious Kids: who were the Spartans?

How are Chinchorro mummies made?

The Chinchorro had different ways of preserving (to keep safely so that it does not spoil) the dead bodies. They would start by removing all the organs inside the body, even the brain. The hair and skin would also be removed using stone tools, not metal knives. Some of the sharpest knives were made using a pelican’s beak.

Sometimes, the head, arms and legs would be removed and the body was put back together later. The body would be dried out using a mixture of hot coals from a fire, as well as ash. They would place sticks inside the body to keep the body stiff and fill the insides with straw and feathers. The face would be covered in clay and left out to dry for 30-40 days. Sometimes the bodies would be painted red or black.

How did the Chinchorro mummies die?

Some of these bodies had diseases and broken bones. Arthritis and bone decay are two common diseases. Some mummies have damage in their ears suggesting that some people may have been deaf. This damage likely came from diving in the ocean for shellfish. Many mummies have broken bones that have gotten better. These injuries are either from accidents at work or fighting inside the community. 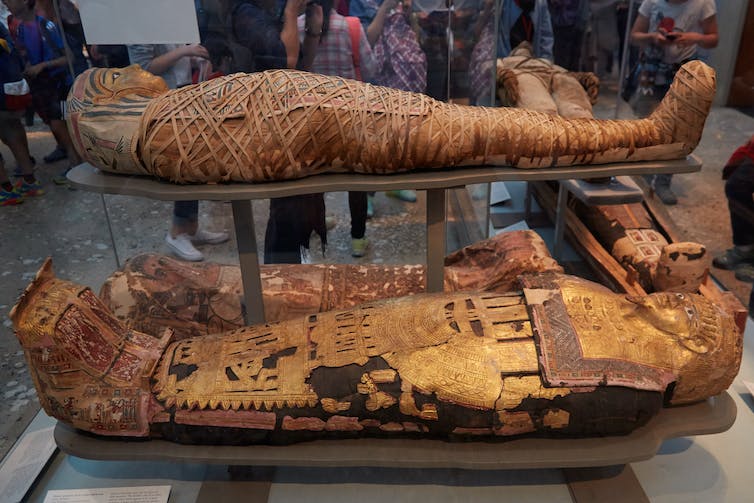 Unlike in ancient Egypt where only the very rich people were made into mummies like this one, the Chinchorro people made mummies from people of different backgrounds. andersphoto/shutterstock, CC BY

All sorts of people were made into mummies - men, women and children, young and older people, too. Even some babies were mummified, which could be because they died during childbirth; these babies were some of the most decorated mummies.

After the mummy was finished, it was not buried. People would put them in their houses and other places where people lived, worked and played. Some people think the mummies brought good luck.

We are not exactly sure why the Chinchorro made these mummies but we think it is because they cared for their dead families and wanted to keep their physical body, and their memory, alive forever.