Never has more data been held about us by government or companies that we interact with. Never has this data been so useful for analytical purposes.

But with such opportunities come risks and challenges. If personal data is going to be used for research and policy purposes, we need effective data governance arrangements in place, and community support (social licence) for this data to be used.

The ANU Centre for Social Research and Methods has recently undertaken a survey of a representative sample of Australians to learn their views about about how personal data is used, stored and shared.

While Australians report a high level of support for the government to use and share data, there is less confidence that the government has the right safeguards in place or can be trusted with people’s data.

What government should do with data

In the ANUPoll survey of more than 2,000 Australian adults (available for download at the Australian Data Archive) we asked:

On the whole, do you think the Commonwealth Government should or should not be able to do the following?

Six potential data uses were given. 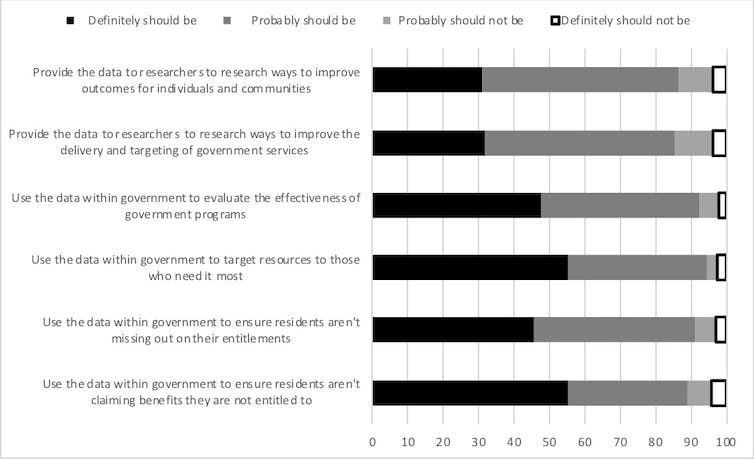 Do you think the Commonwealth Government should or should not be able to … ? ANU Centre for Social Research and Methods Working Paper

Overall, Australians are supportive of the Australian government using data for purposes such as allocating resources to those who need it the most, and ensuring people are not claiming benefits to which they are not entitled.

They were slightly less supportive about providing data to researchers, though most still agreed or strongly agreed that it was worthwhile.

Perceptions of government data use

Community attitudes to the use of data by government are tied to perceptions about whether the government can keep personal data secure, and whether it’s behaving in a transparent and trustworthy manner.

To measure views of the Australian population on these issues, respondents were told:

Following are a number of statements about the Australian government and the data it holds about Australian residents.

They were then asked to what extent they agreed or disagreed that the Australian government:

Respondents did not express strong support for the view that the Australian government is able to protect people’s data, or is using data in an appropriate way. 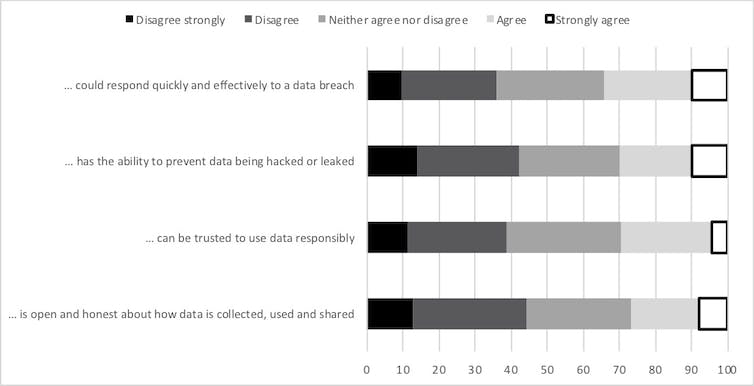 To what extent do you agree or disagree that the Australian Government … ? ANU Centre for Social Research and Methods Working Paper

Read more: What are tech companies doing about ethical use of data? Not much

We also asked respondents to:

[think] about the data about you that the Australian Government might currently hold, such as your income tax data, social security records, or use of health services.

We then asked for their level of concern about five specific forms of data breaches or misuse of their own personal data.

We found that there are considerable concerns about different forms of data breaches or misuse.

More than 70% of respondents were concerned or very concerned about the accidental release of personal information, deliberate hacking of government systems, and data being provided to consultants or private sector organisations who may misuse the data. 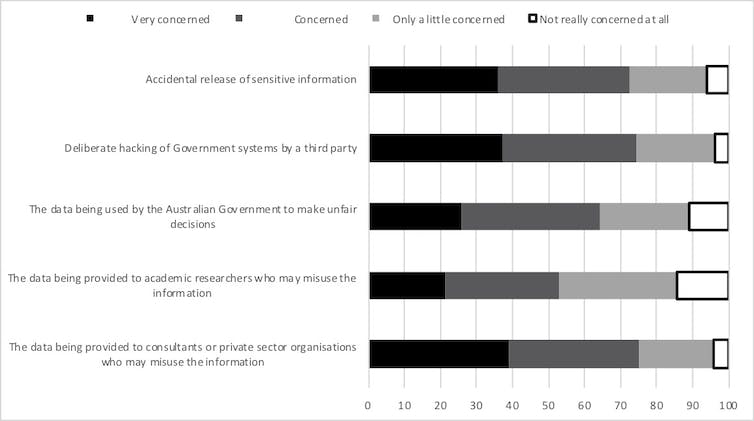 Trust in government to manage data

The data environment in Australia is changing rapidly. More digital information about us is being created, captured, stored and shared than ever before, and there is a greater capacity to link information across multiple sources of data, and across multiple time periods.

While this creates opportunities, it also creates the risk that the data will be used in a way that is not in our best interests.

There is policy debate at the moment about how data should be used and shared. If we don’t make use of the data available, that has costs in terms of worse service delivery and less effective government. So, locking data up is not a cost-free option.

But sharing data or making data available in a way that breaches people’s privacy can be harmful to individuals, and may generate a significant (and legitimate) public backlash. This would reduce the chance of data being made available in any form, and mean that the potential benefits of improving the wellbeing of Australians are lost.

If government, researchers and private companies want to be able to make use of the richness of the new data age, there is an urgent and continuing need to build up trust across the population, and to put policies in place that reassure consumers and users of government services.