It’s hard to tell if Donald Trump’s trumpeting of “substantial progress” in trade talks, leading to a cosy weekend at Mar-a-Lago to sign a deal with Chinese president Xi Jingping, represents reality.

Most observers, though, will be relieved by his decision to again defer his threat to escalate the US-China trade war and hike up tariffs from 10% to 25% on US$200 billion worth of Chinese imports. (The total value of US imports from China in 2018 was US$493 billion.)

Read more: WTO offers Trump a solution to enforcing a trade deal with a China that breaks promises

Trade wars are generally considered bad for everyone. KPMG has calculated a full escalation of the trade war – with a 25% tariff applying to all goods traded (worth US$604.5 billion in 2018) – would cost Australia A$58 billion over the next decade.

But far worse for Australia, and its Asia-Pacific neighbours, could be a deal to end the trade war, especially if it involves a grand geopolitical bargain between the US and China.

Considering the US administration’s hard-line approach, for a truly comprehensive deal to occur China would have to subscribe to a serious restructuring of its industrial system. This would ultimately mean phasing out covert state subsidies, liberalising its financial markets and giving up on meaningful technological competition in security-sensitive sectors.

But out of fear an ongoing trade war will harm its export-driven economic progress, and also as an expedient step for advancing its regional hegemony, China might eventually agree to all this as part of a grand bargain.

Essentially, a grand bargain with an “America First” US administration makes sense on the mutually beneficial assumption it would lay the foundations for a bilateral world order. 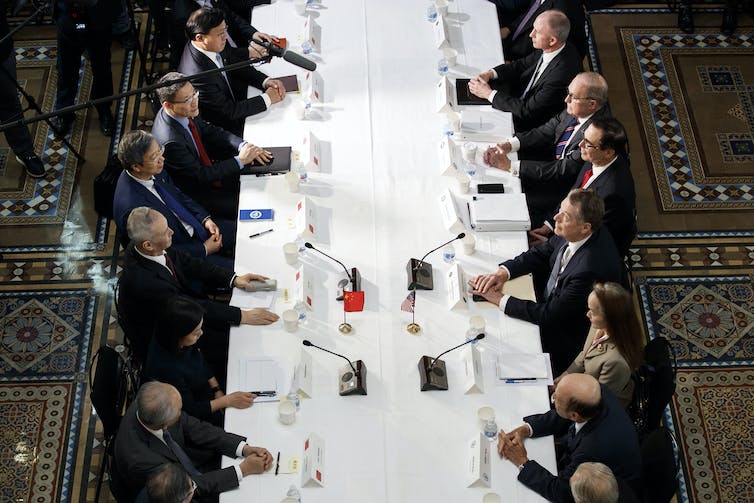 US and Chinese delegations talk trade in Washington, DC on January 21, 2019. Shawn Thew/EPA

As part of the deal the US would dramatically reduce its strategic footprint from the Middle East through to the Korean peninsula. The advantage would be it could focus resources on limiting China’s naval role across Indo-Pacific trading routes.

Retreating to a more sustainable role as the indispensable maritime power across the Pacific and Indian oceans would leave China free rein to exert its weight on land in Eurasia.

The US might see that as advantage. Chinese regional hegemony inland would give Russia more to think about on its south-eastern border, rather than causing problems for US allies in eastern Europe. It would also put extreme pressure on India to finally evolve into a subsidiary power to the US maritime empire, one of the wildest strategic dreams in Washington.

The downside would be that Russia might end up as a subservient commodity supplier to China’s regional empire. Russia’s geo-economic downgrade would strengthen European resolve to run independently of the US, one of the worst nightmares in Washington.

For China, the prize would be achieving the main strategic ambitions of its Belt and Road Initiative, ultimately controlling land trading routes from Beijing to Venice. The strategic cost would be abandoning its maritime ambitions.

Where this leaves Australia

Where would this bilateral world system vision leave Australia?

Certainly worse off than the current situation. With interlocking spheres of influence across the Indo-Pacific rim (US) and the Eurasian landmass (China), at best Australia would become a marginal economic and security appendage of the two hegemons.

Relegated to the role of a price- and rule-taking commodity supplier to China, Australia would remain only nominally a US ally. It would be a rather disposable buffer state at the frontier of two empires, caught between the economic and security crossfire of proxy conflicts.

Though tariffs will weaken the global economy, it will hurt the US and China the most. It might even weaken their respective commercial and military grips on the Asia-Pacific region to the point that patterns of more distributed power relations could emerge.

Read more: Why there will be no winners from the US-China trade war

Economic analysis suggests many Asian economies are already relative winners, as tariffs motivate US and Chinese businesses to “decouple”.

Malaysia, Japan, Pakistan, Thailand and the Philippines lead the nations gaining from US and Chinese companies buying goods elsewhere. Vietnam, Malaysia, Singapore and India are the top beneficiaries from US companies shifting production away from China.

Several Asian countries have also seized the opportunity to play the US and China against each other.

The Philippines has revitalised relations with China to manage the South China Sea dispute more independently from the US. This has not stopped it remaining by far the largest recipient of US military aid in Asia.

South Korea has signed bilateral free-trade agreements with both China and the US, positioning itself as an intermediary that will allow American and Chinese companies to trade in a way that circumvents the tariffs.

Malaysia’s government has affirmed strategic neutrality by pulling back from deals that would put it in debt to Chinese investors.

This is arguably an unprecedented opportunity for Australia to start carving a more independent foreign policy.

Our interests lie in taking an active role in promoting a world system truly based on multilateral rules rather than great power relations.

The worst-case scenario for an ongoing US-China trade war is that it turns into real war. But that’s unlikely.

So long as it remains a manageable trade dispute, it is better for Australia, and much of the rest of the world, than trade peace leading to a bilateral world system.