Venture to the local shops and you’ll probably see dogs outside on the footpath waiting for their owners. Perhaps the store has provided a hook for dog leads and a bowl of water for thirsty canines. But travel further from home, into the city centre for example, and you are unlikely to see many dogs, or other pets. The same applies to most parks and beaches, and certainly to cafés, bars, restaurants, department stores, and public transport.

Although Australia is a nation of pet owners and pet lovers, our non-human companions are not welcome in most public spaces in our towns and cities.

Read more: With the rise of apartment living, what's a nation of pet owners to do?

Some 62% of Australian households have a pet. While these rates are similar to those in the United States (65%), they are much higher than the United Kingdom (40%) and continental Europe (around 40%), where pets are much more visible and tolerated in public places. 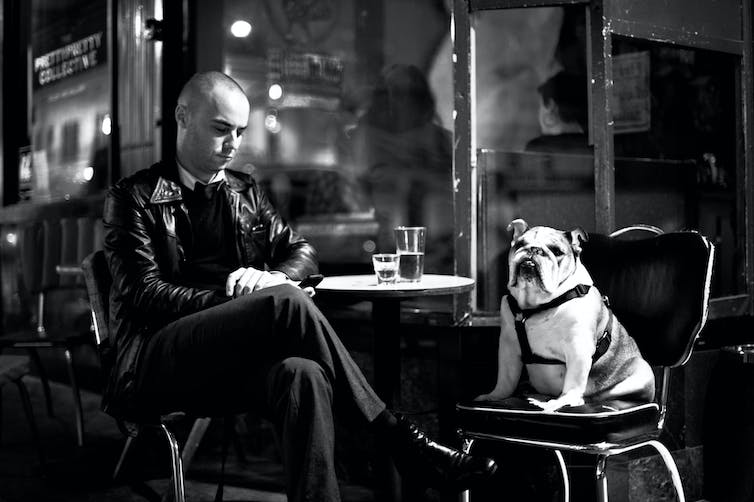 The British have a much more tolerant attitude to pets in public places. Almonroth/Wikimedia Commons, CC BY-SA

There are 4.8 million pet dogs, 4.2 million pet birds and 3.9 million pet cats in Australia. Of those of us who don’t have a pet, 59% report we would like one in the future. The ratio of pets to people in Australia is 101:100 – there are more animal companions than Homo sapiens.

In fact, more of us live in a house with a cat and/or a dog than with a child. For many people, especially those without children, pets are increasingly being anthropomorphised and replacing human family members.

Businesses are responding to the growth of the pet supplies sector by developing and marketing everything from vegetarian pet food to sophisticated smartphone surveillance apps. The market for pet insurance, pet day care, pet taxis, grooming and funeral services is robust, providing many opportunities for entrepreneurs and start-ups to tap into consumer demand for pampered pets.

At the same time as spending on pets is increasing, our backyards are shrinking, with many of us choosing high-density apartment living. In addition, new housing developments feature larger houses and garages, which dominate the block at the expense of front and back yards. This means there is much less room for our pets at home than ever before.

Historically, the Australian dream was a house on a quarter-acre block with plenty of outside space for pets, but blocks and yard space are shrinking in new housing developments. 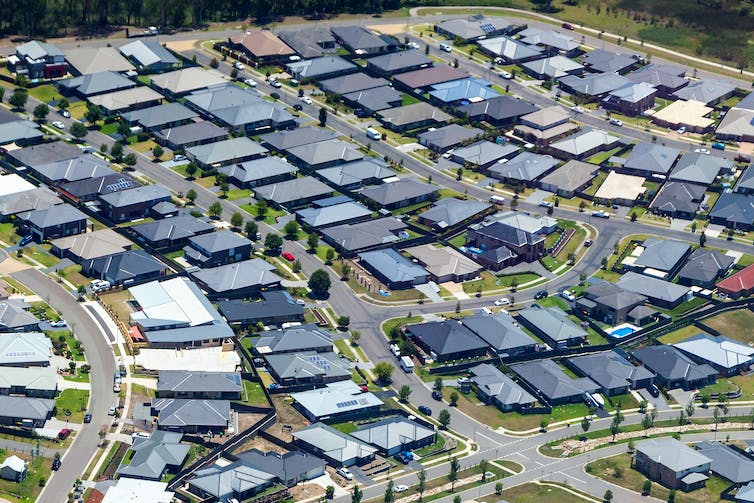 New housing developments (this one is in the Newcastle suburb of Fletcher) offer a lot less yard space than they used to. Ben Jeayes/Shutterstock

With outdoor living space disappearing, pets and their owners must increasingly turn to public spaces for social activity and interaction. 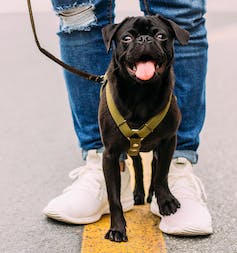 Australians face many restrictions on where they can take their pet, even if it’s just for a walk outdoors. leonides ruvalcabar/Unsplash

The problem is that pets are not welcome in many public places. In most local council areas, the presence of domesticated animals is heavily restricted and governed by myriad council by-laws.

Local parks and beaches are mostly off-limits. The fines for non-compliance are hefty.

If you want to take your dog to a local café, you’ll have to sit outside. Even if you go to a “human-friendly” dog or cat café you won’t be served food because most pet cafés aren’t permitted to make or serve human food.

In most cities, pets are not allowed to travel on trains, trams, buses or ferries; travelling with pets is either outlawed altogether or managed with strict guidelines for restraining pets and restricted travelling times.

Read more: Riding in cars with dogs: millions of trips a week tell us transport policy needs to change

Research confirms the many benefits of pet ownership. In terms of general health and well-being, they improve our mental health and often provide the impetus to exercise. These are important issues for our time-poor, fast-paced and stressed-out society.

Pet ownership also allows for interaction with others in social settings and in local communities. The importance of pets in fostering social interaction has been established in a study that found owning a pet is incredibly important for well-being and increasing social connectedness in neighbourhoods. In fact, 60% of participants in the study who owned a dog knew their neighbours better than those without a dog. Even 25% with a different type of pet reported the same.

There is clearly a need to provide more public places for animals and humans to interact, particularly in settings that allow for greater social interplay. As city planners work towards cities that are “smart”, “green” and “walkable”, the focus should also be on making our towns and cities much more pet-friendly by providing outdoor spaces that encourage and foster interaction between animals and humans.

We need an approach that recognises the benefits of human-animal connection and makes provisions for “animal-friendly” cities by opening up more areas for pets and their owners.

Given Australia’s passion for pets, we should be able to interact with them in public. This will help us strengthen social ties, build local communities, improve our health and reduce social isolation.

Read more: Speaking with: Emma Power and Jennifer Kent about why Australian cities and homes aren't built for pets