The ubiquitous kebab van has become part of the urban character of Melbourne over the past three decades. Long before the food-truck craze hit Melbourne, inner-city dwellers knew the kebab van: a food outlet of modest scale, temporary construction (most often existing within a van or trailer), and typically located within car washes or petrol stations at the intersections of busy arterial roads.

Almost by stealth, the kebab van filtered through suburban road networks and car-service businesses. Mainstream culture tolerates them because they occupy unattractive, undesired urban voids and provide alternatives to the corporate likes of McDonald’s. Despite the kebab van’s subculture status, the practices of “kebab urbanism” can teach policymakers and planners a lot about placemaking. 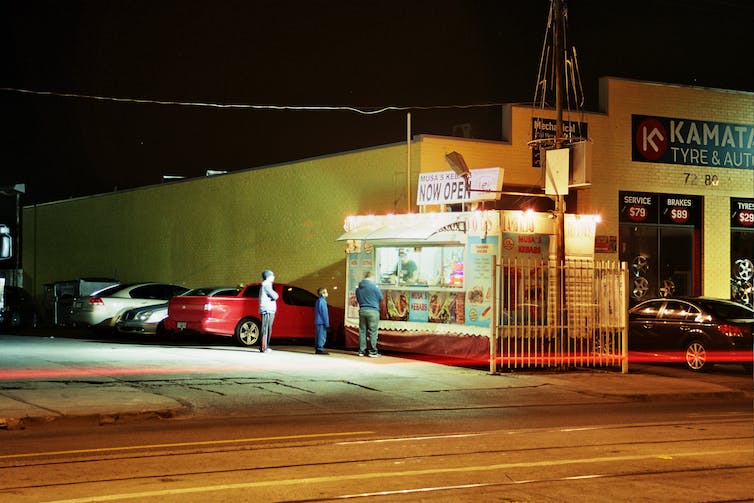 Musa’s Kebabs blends into its gritty urban setting in Brunswick by day, but at night it’s a bright beacon in a fairly bleak street. James Connor

A pathway for migrants

Migrant urbanism and kebab urbanism are closely linked. The value of the kebab van cannot really be understood without first recognising the value of immigration. First introduced by Middle Eastern and Turkish immigrants in the 1960s, mainstream Australian culture adopted kebabs, which have come to symbolise the success of multicultural policy.

For many migrants, the kebab van is a point of entry into a new society. They provide a path of transition into starting a business, allowing owners to establish a customer base and earn money before committing to a formal shop lease. This process of social mobility is well established in many Asian cities, where informal street vendors can end up running more formal establishments.

Despite this, the kebab van is rarely acknowledged as part of the image Melbourne projects globally – especially compared to its renowned daytime sibling, the café of Southern European heritage, which is widespread across Melbourne’s high streets and neighbourhoods. Rather, the kebab van is seen as something temporary, to be phased out as the city gentrifies. Often occupying unwanted urban territories, these kebab vans have had to mediate and negotiate the challenges of difficult spaces in order to survive.

Most restaurants would never open a shop on the corner of a busy intersection. The conditions are far from ideal – these are loud, inaccessible and unpleasant areas. However, kebab vans see these sites as opportunities. In fact, it is the commonplace urban character of kebab van locations and their relatively unsociable night-time trading hours that have allowed them to proliferate across the city. 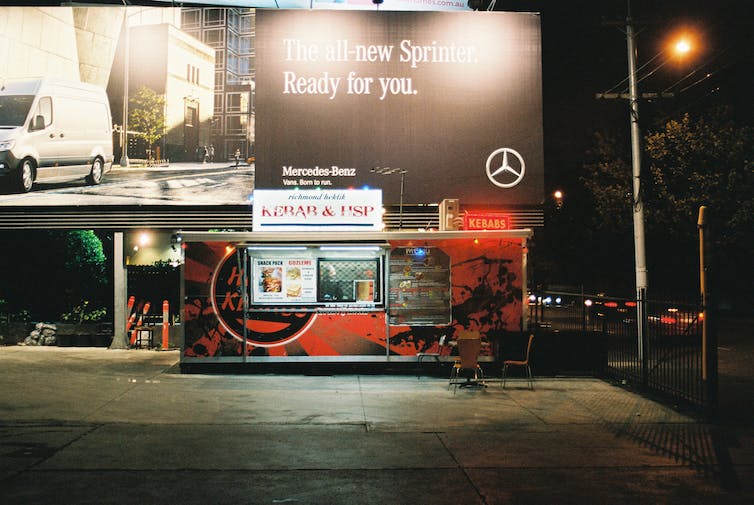 Richmond Hektik Kebab and HSP is located at a petrol station on a busy intersection in Richmond. Access by car is imperative – hence it faces the street and has flashing signage. James Connor

During the day, the kebab vans’ modest scale, unassuming form and chameleon-like signage help them blend into their urban surroundings. At night it’s a different story – their locations on arterial roads and key intersections, flashing signs and oversized font purposefully demand attention to attract business.

Kebab vans come alive when the daytime businesses they share space with are closed. Some vans even offer dining areas in what were driveways and parking spots only hours earlier. 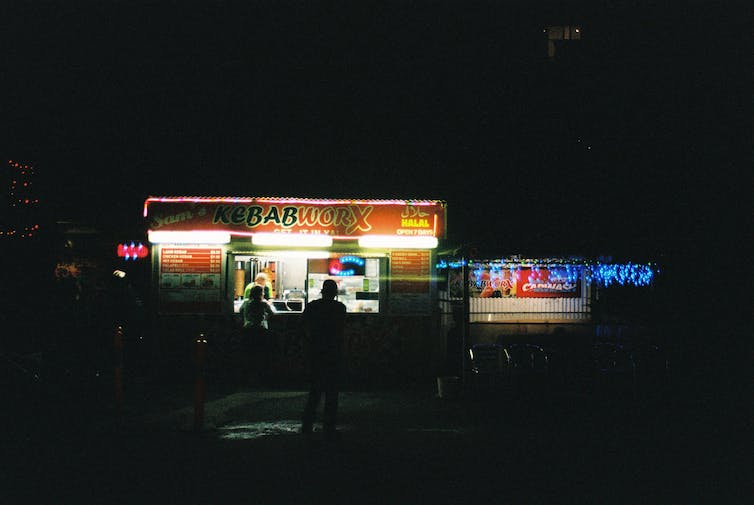 Many kebab vans have existed for over a decade and have become local suburban icons. Town Hall Kebab in Brunswick was located next to a car wash at the rear of a church. The kebab van earned its reputation as an “institution” among its many competitors along a popular culinary streetscape. Even celebrity chef Anthony Bourdain praised the van’s cuisine. 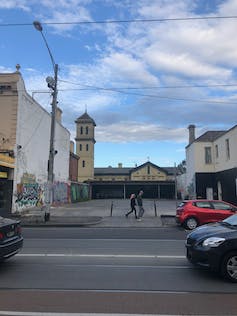 The site where Town Hall Kebab once stood has reverted to being a carpark. Tahj Rosmarin

Despite this, the restaurant was still considered temporary and became embroiled in a legal dispute. Town Hall Kebab was ordered to vacate the premises. It no longer operates from a van but as a fixed food outlet instead. What was a well-known restaurant and social gathering space along a popular Melbourne high street reverted to its original function as a car park – although the owner, the Anglican Church, plans to develop a community space.

While kebab vans can contribute significantly to sub/urban identity, sometimes over decades, their temporary nature means they can exist and depart very quickly. It’s common to hear of cases like those of Town Hall Kebab owner Abou Ahmed and Glenny Kebabs owner Asad Syed, who was evicted from a petrol station in Glen Waverley. Despite succeeding in a legal bid to re-open his business, Syed was looking for another site.

Cases like these demonstrate the grey areas of informal trading and the problems many policymakers face when trying to formalise these situations. Unfortunately, the outlook of many politicians and city makers is that kebab vans are ugly and detract from the ideal urban or suburban experience.

Interestingly, this outlook is at odds with the concurrent promotion of food-truck culture by many of these same proponents, confirming cultural biases against the “other”. Sites such as “Welcome to Thornbury” represent the homogenisation of this phenomenon and mark decisive moments in the gentrification of such areas. 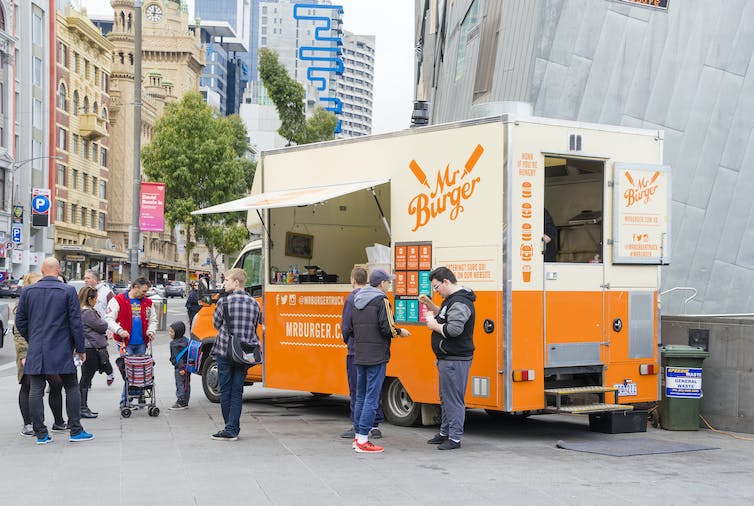 Kebab urbanism offers an alternative to the spread of generic urbanism, fuelled by gentrification of many inner-city suburbs. They operate across many different spaces and spectrums – ranging from the car to the pedestrian, temporary to permanent, formal to informal. It is small urban gestures such as these that continue to diversify, enliven and humanise our cities. They insert human activities and the sense of security from being among people in spaces that would otherwise be considered unsuitable for socialising, or even threatening.

There is no doubt that kebab vans affirm the successes of Australian multiculturalism’s bottom-up practices. They have become a mainstay of Melbourne’s urbanity.

Top-down multicultural policies need to reflect and complement this reality, in order to dispel the populist and polarising myths of immigrants’ inability to adapt to Australian culture. On the contrary, migrant urbanism, of which kebab urbanism forms a subset, will continue to complement, enhance and help renew our shared culture.