On the weekend, Opposition Leader Bill Shorten said he would end the Medicare freeze in his first 50 days as prime minister if Labor won the election.

Every day Morrison’s Medicare freeze stays in place is another day that families are paying higher out-of-pocket costs to visit the doctor. If I’m elected prime minister, I won’t waste any time stopping Morrison’s cuts to Medicare.

Health issues always feature strongly in election debates, but what is the Medicare rebate freeze and how does it affect what you pay when you see a GP?

Medicare is our public health insurance system and funds a range of services such as GP visits, blood tests, X-rays and consultations with other medical specialists.

The Medicare Benefits Schedule (MBS) lists the services the Australian government will provide a Medicare rebate for. Medicare rebates don’t cover the full cost of medical services and are typically paid as a percentage of the Medicare schedule fee.

Read more: Explainer: what is Medicare and how does it work?

GPs who bulk bill agree to charge the Medicare schedule fee and are directly reimbursed by government.

Those who don’t bulk bill are free to set their own prices for services. Patients pay for their treatment and receive a rebate from Medicare.

There is often a gap between what patients pay for services and the amount that Medicare reimburses (A$37 for a GP consultation, for example). This gap is known as an out-of-pocket expense, as the patient is required to make up the difference out of his or her own pocket.

Under an indexing process, the Medicare Benefits Schedule fees are raised according to the Department of Finance’s Wage Cost Index, a combination of indices relating to wage levels and the Consumer Price Index. 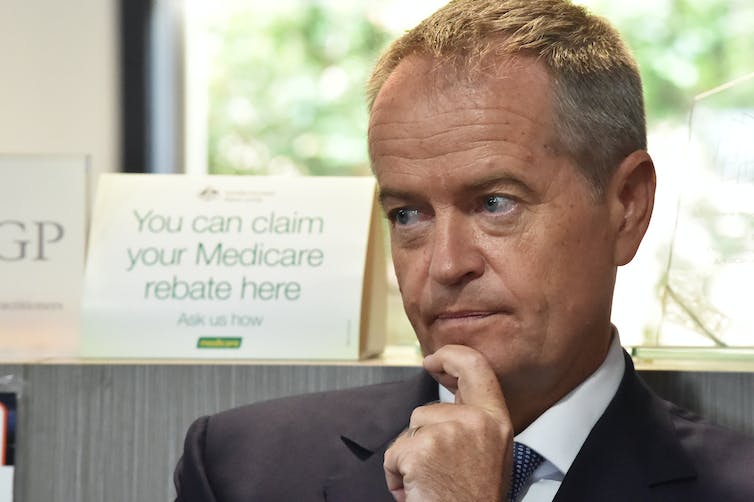 Organisations such as the Australian Medical Association (AMA) have long argued this process is inadequate and Medicare schedule fees have not kept up with “real” increases in costs to medical practitioners of delivering services.

The rebate freeze compounds this financial challenge by continuing to keep prices at what the AMA and others argue are “unsustainable levels”.

How did the freeze begin?

Although the Coalition is largely associated with this issue, Labor first introduced the Medicare rebate freeze. The freeze was introduced as a “temporary” measure in 2013, as part of a A$664 million budget savings plan.

The AMA, the Coalition and others loudly criticised the then government for the freeze.

However, on being elected to office in 2014, the Coalition froze the rebate after the failure of a number of proposed health policies. The rebate was frozen initially for four years, starting in July 2014, and extended in the 2016 federal budget to 2020.

Read more: Rebate freeze will set GPs back $11 per general patient consultation, but they’re likely to charge them more

Although the freeze was to be in place across the board until 2020, since 2017 there has been a phased lifting of the freeze for GP bulk-billing incentive payments (July 2017), standard GP consultations and other specialist consultations (July 2018), medical procedures (due July 2019) and targeted diagnostic imaging services (from July 2020).

What impact has the freeze had?

The freeze means those medical professionals who have not seen it lifted are reimbursed the same for delivering health services today as they were in 2014.

Professionals are paying more for their practices, staff, medical products, utilities and just about anything else that goes into running a medical service. But the amount paid remains static.

Those who have had indexing return to their services have seen only a limited rise in their value – A$0.55 for a GP consultation, for example.

In the run-up to the 2016 federal election, Labor made a similar promise and told voters they needed to “save Medicare” from the government’s plans to privatise the system.

This tactic was dubbed the “Mediscare” campaign. Some saw it as being highly effective in driving a swing towards Labor in the last election. 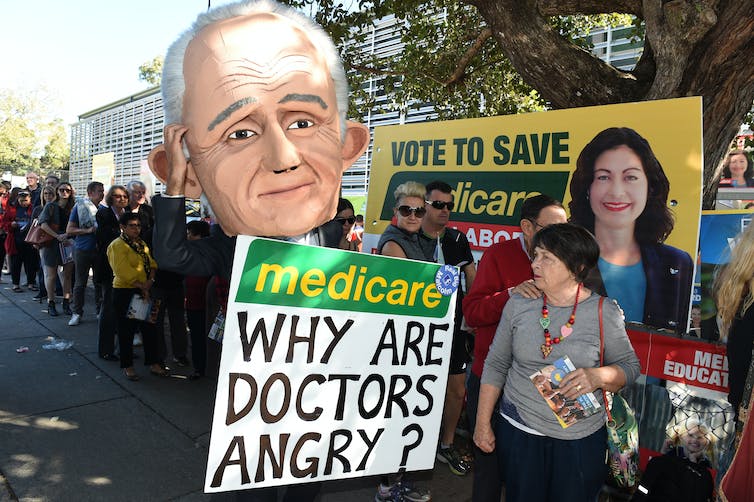 The ‘Mediscare’ campaign drove a swing to Labour in the 2016 election. Dan Peled/AAP

Last month the shadow health minister, Catherine King, blamed the Coalition for the freeze and argued this had driven up out-of-pocket costs for both GP and specialist visits, leading to more than 1 million people delaying or avoiding medical care.

There are a number of reports of GP practices and specialist services halting bulk-billing and patients having to pay higher out-of-pocket costs.

Some commentators argue these figures are misleading as they are calculated on services and not patients and so may be an indication of the increasing number of health services that use the MBS.

GP groups have welcomed the lifting of the Medicare freeze, but argue the indexation rates still fail to reflect the genuine value of general practice.

For those in areas such as diagnostic testing, the freeze is argued to have a profound impact. The Australian Sonographers Association argues that for ultrasound alone the average out-of-pocket cost for patients has increased by 117%.

Many experts argue that just giving a little more funding to GP services will not improve the quality of the Australian health care system and far more fundamental issues need attention if we are to see significant reform.