It is perhaps poetic that a region most famous for its lack of trees lies so close to one of Australia’s greatest tree-based spectacles. The Nullarbor Plain, our famous, flat, featureless expanse is literally named for its absence of trees (“arbor” being Latin for tree).

And if you ever get to drive west along the longest stretch of dead-straight road across this iconic landscape, you will come to know the highlights that characterise the experience: the cliff-top views of the Great Australian Bight and the idiosyncratic roadhouses.

Read more: A detailed eucalypt family tree helps us see how they came to dominate Australia

Then finally, a landscape of low shrubs gives way to mallee trees and woodland vegetation. Somewhere between Caiguna and Fraser Range you’ll see your first Eucalyptus salubris, also known as a gimlet gum, or joorderee by the Ngadju people.

It was on a recent botanical research trip chasing scraggly emu bushes that I stumbled upon, and fell in love with, Eucalytpus salubris. The trunks were what instantly caught my eye, slender with graceful twists, all the more observable for the brilliantly shining coppery bark. 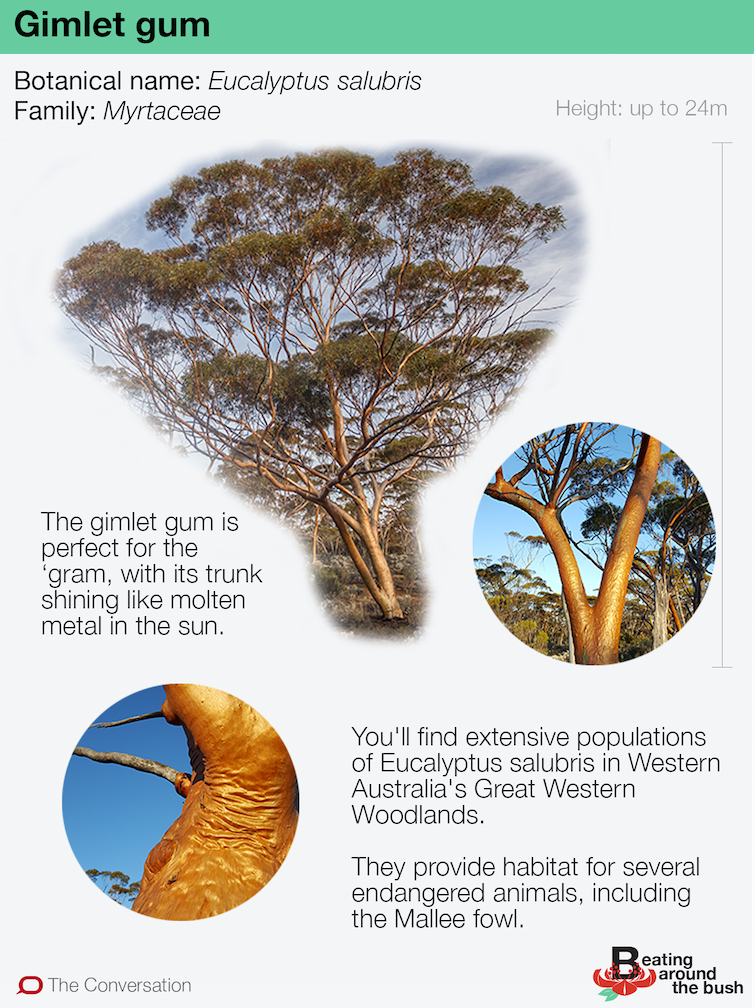 The Conversation The sexy gum The tree first appears in European record during early explorations crossing east of the Darling Range. Then, it was called “cable gum” after the gently twisting grooves in the trunks. Later the tree was given the common name of “gimlet” after a form of hand drill. Unfortunately this name stuck and today the species remains “gimlet” – a wholly unattractive moniker for such a splendid tree. But our imaginations need not be held hostage by the stubborn colonialists who named our flora after such dreary things. Read more: Stringybark is tough as boots (and gave us the word 'Eucalyptus') That’s why I’m campaigning to update the common name to something more universal, more marketable, something truer to its sensual twists and smooth, glowing bronze surface. Eucalytpus salubris is the Sexy Gum. Love goes where my eucalypt grows E. salubris is a dominant species forming woodlands on deep soils east of the Darling Range. And while much of its former range in the Wheatbelt of Western Australia has been cleared, extensive populations of E. salubris remain in the astonishing stronghold of the Great Western Woodlands. Those who have walked in a mature woodland understand the pleasure of wandering unimpeded in the shade of widely spaced trees. 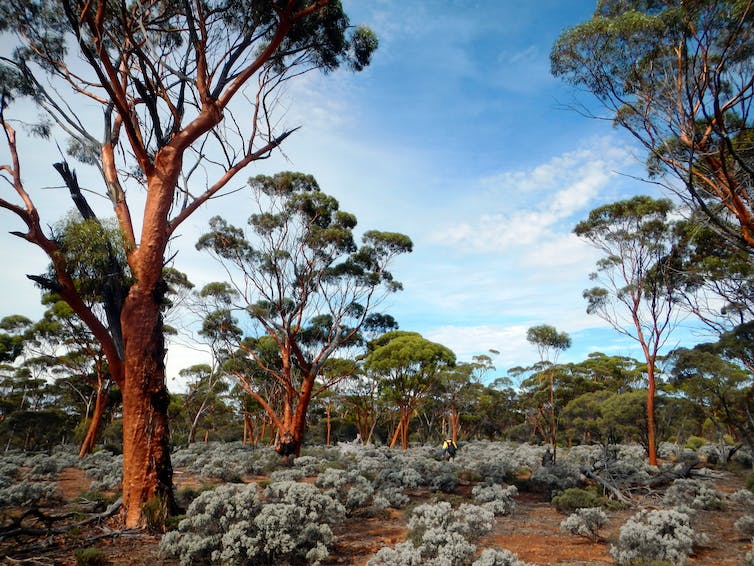 Widely spaced trees of the Great Western Woodlands. Keren Gila/Wikimedia, CC BY The Great Western Woodlands offers this experience on a grand scale. At around 16 million hectares they are the largest tracts of intact temperate woodlands on Earth, occupying an area larger than England and Wales combined. And it is not just size that is impressive about these woodlands. The Great Western Woodlands are a renowned hotspot for eucalypt diversity, home to around 30% of Australia’s eucalypt species in just 2% of its land area. As one of the more common species throughout the area, E. salubris plays a critical ecological role, providing habitat for several threatened bird species including the rotund and charismatic Mallee fowl. Read more: We need to think about fire in Tasmania's forests Due to its remoteness and unreliable rainfall, the Great Western Woodlands has avoided the widescale grazing and clearing that has degraded neighbouring areas to the south and west. But despite the value of this untouched landscape, most of the area is “orphan country” with no formal management policies in place. Some 60% of the Great Western Woodlands is unallocated crown land, unmanaged and open access. This is a plus for visitors wanting to experience it now, but raises important concerns about the long-term security of the area. While remote, threats to the Great Western Woodlands do exist. Chief among them is the increasing frequency and intensity of bush fires. Most eucalypts are resprouters with the ability to regenerate burned canopies from buds under the bark. There are, however a number of species, such as Mountain Ash, that will die following canopy fires and can only regenerate from the soil seedbank (called “reseeders”). Read more: Mountain ash has a regal presence: the tallest flowering plant in the world E. salubris, the sexy gum, is one such reseeder. While the traditional occupants of the land used fire as a land management tool, they also knew E. salubris woodland took hundreds of years to regenerate and were careful to never burn the canopy of old growth forests. The eye-pleasing spectacle of mature open Eucalytpus salubris woodland above red soil and blue-bush therefore exists today thanks to careful management from this era, and deserves careful handling to ensure its ongoing future. 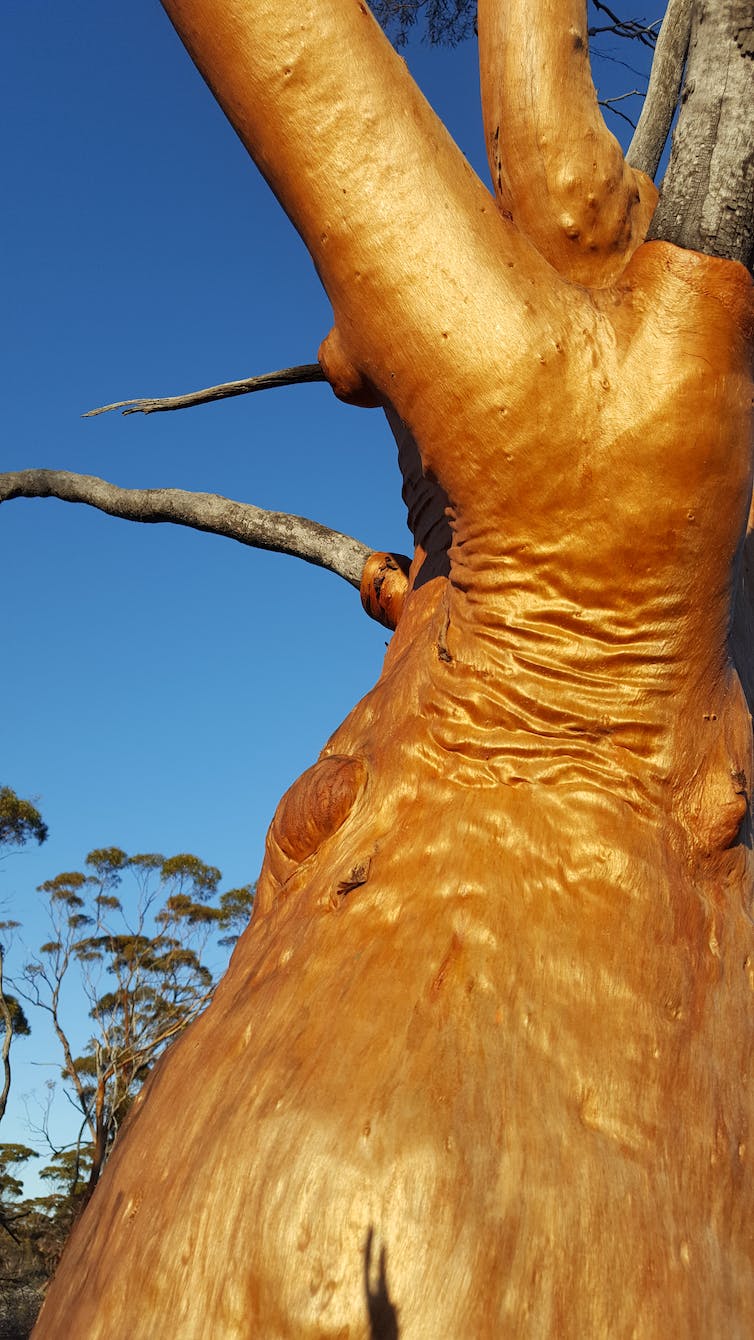 The glowing bronze surface of the Eucalyptus salubris. Author provided (No reuse) An ambassador for the Great Western Woodlands Late in the day, when the Sun’s glancing rays light up the bark of E. salubris, punctuating a pastel blue-green woodland with glowing streaks like molten metal, it’s hard to not stop for at least a moment and be impressed. And while E. salubris’ role as keystone species might be important ecologically, I think the Sexy Gum can be similarly important as ambassador and draw-card for the Great Western Woodlands. Its golden tones and metallic lustre conjures just the appropriate impression for the WA Goldfields. It is totally Instagram-able, and I don’t think it’s a hard sell to convince people E. salubris is a spectacle worth getting off the beaten track for.