The latest statistics on childhood poverty in New Zealand suggest that, on some key measures, things are worse than previously estimated.

About one in six children (16% or 183,000) live below a before-housing-cost relative poverty measure, but that figure jumps to almost one in four (23% or 254,000) once housing costs are accounted for. And 13% (148,000) are living in households that experience material hardship – 6% in severe hardship. These children don’t have such basic things as two good pairs of shoes. Their families regularly have to cut back on fresh fruit and veggies, put up with feeling cold and postpone visits to the doctor.

The data show that the government will need to do much more to reach its targets for reducing childhood poverty.

New Zealand introduced the Child Poverty Reduction Act at the end of last year. It was a bold move reflecting the Ardern government’s commitment to do something about New Zealand’s dismal child poverty statistics. Earlier this month, Stats NZ released the first set of baseline statistics required under the act.

Previous governments, both National and Labour, may have talked about child poverty but shied away from binding targets. Prime Minister Jacinda Ardern, who has also made herself minister for child poverty reduction, has put through clear legislation, eventually winning cross-party support for it.

The act does two main things. First, it requires the government statistician to report annually on a set of four “primary” and six “supplementary” measures of child poverty. (One primary measure, poverty persistence, does not come into force until 2025.)

Second, it requires governments to set three-year and ten-year targets for each of the primary measures and to report on progress to parliament. Any failures to meet targets must be explained.

The three primary measures are:

Well before the act was finalised, the prime minister had announced the government’s ten-year targets: 5% on the first measure, 10% on the second and 7% on the third.

These are ambitious targets, which would put New Zealand near the top of the OECD rankings. That said, they still imply a significant number of children in poverty.

During the evolution of the legislation, the government also decided to bring forward the starting year for measurement of the targets to 2018-19, therefore making the baseline year 2017-18. This has the advantage of ensuring the impact of its Families Package contributes to achieving the targets, but the disadvantage that targets had to be set before the official Stats NZ baseline measures were available.

The three-year targets were therefore expressed in percentage-point decreases, rather than in absolute terms (reductions of 6, 4 and 3 percentage points respectively).

Ironically, the worse-than-expected figures make the government’s short-term targets slightly easier to reach. Taking six percentage points off a larger number is easier to achieve than if the baseline had turned out lower than expected. Nonetheless, it must still lift 72,000 children over the first line, 42,000 over the after-housing-cost measure, and 37,000 out of the material hardship category.

How to reduce childhood poverty

The Families Package, announced before the 2017 election, will go part of the way. Its increases in the Working for Families tax credits and, to a lesser extent, the changes to the Accommodation Supplement will reduce child poverty, especially against the first before-housing-cost measure. Treasury has estimated that the Families Package will reduce the number of children below this measure by 64,000 by 2021.

The impact on the after-housing-cost measure is likely to be smaller because of rising rental costs, which grew by an average of 5.2% during 2018. The reduction in the number of children living under material hardship is also likely to be less substantial.

Other changes might have some effect. The government is committed to increasing the statutory minimum wage to $20 per hour by 2021. It was $15.75 for most of the baseline year, rising to $16.50 on April 1 2018. Ministry of Business, Innovation and Employment analysis, however, suggests minimum wage increases will have a “relatively limited impact” on poverty among households with children because most poor kids are not living in households with a minimum-wage earner.

Housing initiatives, especially more state housing, will help eventually but will take too long to have any impact on the three-year poverty targets. The 2018 budget extensions to free and low-cost doctors’ visits for children and the broadening of access to the Community Services Card can be expected to help families experiencing material hardship, as will other changes such as the banning of tenancy letting fees. But these can only be expected to have marginal impacts.

Substantial further initiatives will be needed over the next two years. The size of the task is illustrated here. 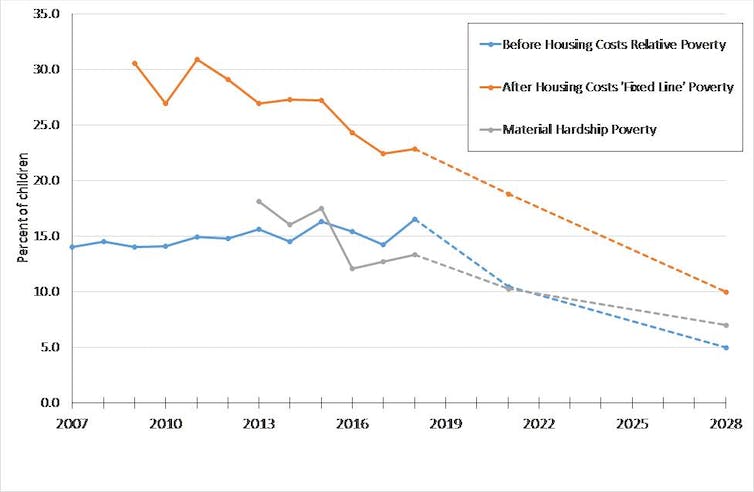 Michael Fletcher, CC BY-ND The after-housing-costs measure must come down the most but has been heading in the right direction following the global financial crisis. This reflects the fact that it is adjusted only for price inflation and the incomes of some poor households have been rising more quickly than prices. The material hardship measure has also been trending down, probably for similar reasons. The most challenging target will be the relative poverty measure. Recent good economic growth and a strong labour market have done nothing to reduce this measure. Indeed, it has been more or less constant for over a decade. Cutting poverty on this measure requires bringing poor households nearer to the median, reducing inequality between the poor and those in the middle. A rising tide that lifts all boats equally will do nothing to reduce relative poverty. The government will also need to ensure its policies help the poorest of the poor. Reaching the three primary targets but not cutting the numbers below the lowest poverty line would be a hollow achievement. Most of these children are in families reliant on benefit incomes. Part of any successful strategy to reduce child poverty must involve increasing the level of assistance to families on benefits.