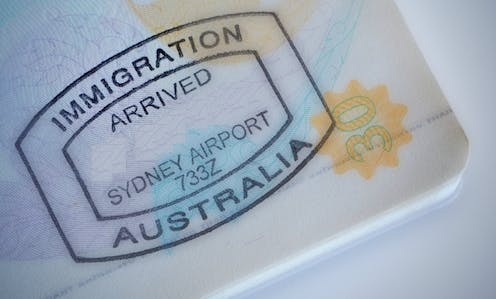 Labor wants higher minimum pay for temporary visa holders, but most are already being paid much more.Shutterstock

Bill Shorten is holding out the prospect of protecting Australian workers from foreign ones.

He has pledged to tighten the visa system for short-term skilled migrants, ensuring they have to be paid more so that “it isn’t...

Bill Shorten is holding out the prospect of protecting Australian workers from foreign ones.

He has pledged to tighten the visa system for short-term skilled migrants, ensuring they have to be paid more so that “it isn’t cheaper to pay an overseas worker than pay a local worker”.

But the evidence does not support his claim that his policy proposal will boost local jobs and wages. He said

There are more than 1 million underemployed Australians wanting more work and youth unemployment is at 11.7%

At the same time, there are almost 1.6 million temporary visa holders with work rights in Australia, with the top end of town turning to temporary work visas to undercut local jobs, wages and conditions

Requirements have already been toughened

Parliamentary Library Prime Minister Malcolm Turnbull replaced the 457 visa with the 482 visa, partly in response to evidence that some employers had exploited the 457 to employ foreign workers on low wages. The new visa required applicants to demonstrate work experience (minimum two years) and English language proficiency the sponsoring employer to demonstrate lack of success in finding a local worker to do the job the salary level to be at the market level for the role, and above what is known as the Temporary Skilled Migration Income Threshold. This is now about A$54,000. Since August 2018, employers of workers with 482 visas have also had to pay a fee to the Department of Education and Training to subsidise apprenticeships. Known as the Skilling Australians Fund Levy, it ranges from $2,400 to $7,200, depending on the length of the visa and the employer’s annual turnover. The core of Labor’s policy is to increase the income threshold to $65,000, a figure that will be indexed annually. The skilling levy would be 3% of the income threshold, a level that for some businesses would be an increase of 63%. Skilled migrants are not the problem The most recent statistics published by the federal government (for 2017-18) show a total of 83,470 people on temporary skilled worker visas (both 482 visas and residual 457 visas). This means Shorten’s reference to the almost 1.6 million temporary visa holders with work rights in Australia – such as backpackers and international students (who we know are often exploited by unscrupulous employers) – is something of a red herring. Labor’s proposal won’t make any difference to them. Read more: Crackdown on foreign workers is part of Shorten's wages campaign Even if the 83,470 workers that the policy would affect were being employed to undercut local wage expectations, their number – less than 1% of Australia’s 10 million total employees – is simply not enough to influence market wages. In no occupation are visa holders more than 1% of total employees. But there’s scant evidence to suggest the 482 visas are routinely used to employ cheaper workers. The average base nominated salary for visas in 2017-18 was $94,800, well above the average full-time wage (about $85,000) and even higher than the $54,000 or Labor’s proposed $65,000 minimum. Admittedly, averages don’t tell the full story. But in only one sector – food and accommodation, accounting for 10.7% of visas granted – was the average wage lower than $65,000. It suggests that raising the income threshold won’t have much impact. Labor’s proposals would be felt in the regions There is one possible exception to this: regional and remote Australia, which has benefited the most from temporary skilled worker visas. If the market wage for say, an early career chef, is below $65,000 (which it could be for some places in Australia), a restaurant or café employer in a small town would no longer be able to employ a migrant worker at the going rate, and it might also struggle to find would be be a $7,800 levy. Labor’s proposal would impose higher relative costs on regional employers. Claims about the impact of temporary work visas on employment and wages have been heard but seldom subject to rigorous analysis. A significant inquiry into short-term migrant work visas in Australia was conducted by a Senate select committee in 2015-16. It noted an inverse relationship between 457 visas granted and the unemployment rate. In other words, the visas were associated with low, rather than high unemployment rates. This suggests visas are meeting genuine skills shortages rather than displacing Australian workers. Migrants create as well as fill jobs Migrant workers are also consumers. They spend their income, contributing to demand for goods and services from local businesses, which adds to the demand for workers generally. The same dynamics apply as those involving all migrants. As peer-reviewed research by researchers at the Australian National University has shown, migration has had “no detectable effect on employment or wages of all workers who have lived in Australia for more than five years”. These findings are essentially supported by the Productivity Commission. In sum, there’s little evidence that Australia’s current visa program for temporary skilled migrants has a negative effect on local jobs or wages. Labor’s plans are unlikely to achieve anything positive. They might even hurt. Read more: Dog whistles, regional visas and wage theft – immigration policy is again an election issue