We often think of black holes as one-way valves that consume everything they come across. But they are also powerful engines that emit radiation and drive energetic jets out into the cosmos.

In research published in the journal Nature, we looked at the emissions from a nearby black hole that’s “feeding” off its orbiting stellar companion.

While bright black hole outbursts have been studied in the past, this black hole is behaving in a way never seen before.

So what makes this one different? To answer that, we need to look at what happens when things fall towards a black hole.

A release of energy

Our everyday experience tells us that a rock falling off a cliff on Earth will speed up as its gravitational potential energy is converted into the kinetic energy of motion.

In a similar way, the release of gravitational energy as gas falls towards a black hole can power some of the most dramatic phenomena in our universe.

The infalling gas swirls around the black hole in a thin disk, known as an accretion disk, whose inner regions become so hot they emit X-ray radiation.

We seem to see jets anywhere in the universe where there are inflows of matter onto a central object such as a black hole. But we do not yet understand the nature of this connection between the inflowing gas and the outflowing jets.

In June 2015, we had a perfect opportunity to study this link. It occurred during an extraordinarily bright outburst of a black hole in a binary system (two objects gravitationally bound together) known as V404 Cygni, about 7,800 light years away in the constellation of Cygnus.

This binary system comprises a black hole (about nine times the mass of our own Sun) in a 6.5-day orbit with a normal star (about 70% of the mass of our Sun). The star is big enough that its outer layers are captured by the black hole’s gravity. 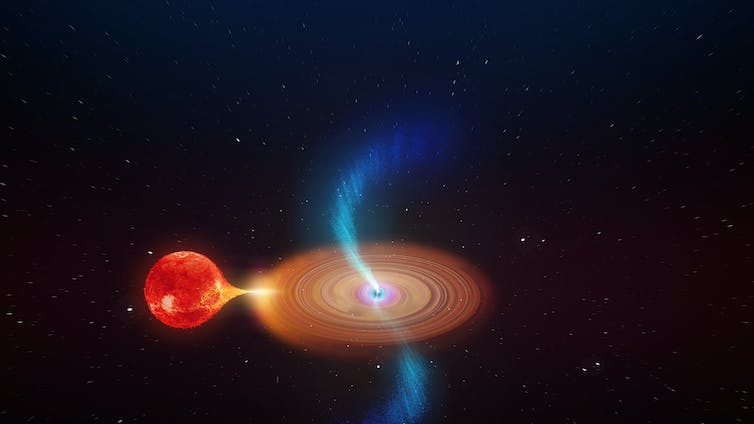 During the 2015 outburst, the black hole was feeding extremely rapidly. It generated more energy every second during the outburst than the Sun emits over three days.

Astronomers all over the world trained their telescopes on this outburst, providing data right across the electromagnetic spectrum, from radio waves to X-rays.

Our team focused on the bright radio emissions from the outflowing jets, using the National Science Foundation’s Very Long Baseline Array (VLBA). This is a continent-sized array of ten 25-metre wide radio dishes, spread across the United States from Hawaii to the Virgin Islands.

This allowed us to make detailed images of the jets, zooming in to a region roughly the same size as our Solar System. This is the equivalent of seeing a dollar coin in Sydney from a location in Perth.

Usually, we make radio images by combining all the data from a single observation together. But the jets from this black hole were changing so rapidly that we only saw a blur – as if we were trying to take a picture of a waterfall with a one-second shutter speed.

To see what was going on, we had to break up our data into much shorter images, each made from only 70 seconds of data.

This allowed us to track the movements of the jets over the course of our four-hour long observation.

But our research showed something unexpected. Rather than moving along the same channel, the jet direction was changing rapidly over time.

In the few systems where jets have previously been seen to change direction, this has occurred relatively slowly, on timescales of months. In V404 Cygni, the jet direction was changing on timescales of hours, or even minutes.

Movie made from our high-resolution radio images shows jets moving away from the black hole in different directions. Credit: ICRAR and the University of Alberta.

Our best explanation for such rapid changes is that the jets were being redirected by a wobbling inner accretion flow around a spinning black hole.

During the bright outburst, the intense radiation from the black hole caused the inner few thousand kilometres of the accretion disk to become puffed up into a doughnut-shaped structure.

According to Einstein’s General Relativity, the spinning black hole drags spacetime – the very fabric of the universe – around with it.

If the binary orbit is not aligned with the black hole spin axis, this frame dragging will cause the puffed up inner disk to precess – it wobbles around like a spinning top that is slowing down. We believe that the precessing inner disk is responsible for redirecting the jets.

Animation of the precessing jets and accretion flow in V404 Cygni. The spinning black hole pulls spacetime (the green gridlines) around with it, causing the inner disk to precess like a spinning top, thereby redirecting the jets. Credit: ICRAR.

To generate a precessing disk, the plane of the binary orbit and the black hole spin must be out of alignment. This can happen when a black hole is formed in a supernova explosion.

Read more: Why Pluto is losing its atmosphere: winter is coming

The explosion gives a kick to the system, pushing it out of alignment. We suggest that similar jet precession could occur any time a spinning black hole is feeding rapidly from a disk that is not aligned.

X-ray observations of other stellar-mass black holes show that such misalignments are likely to be common. Other misaligned situations could include phenomena such as tidal disruption events, where a supermassive black hole’s enormous gravity shreds a star that wanders too close, and the black hole feeds on the resulting debris.