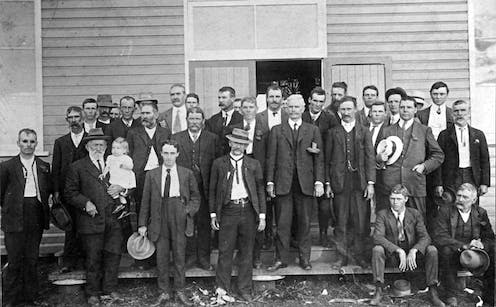 With taxes, health care and climate change emerging as key issues in the upcoming federal election, we’re running a series this week looking at the main issues that swung elections in the past, from agricultural...

One of the forthcoming federal election’s many questions is how rural Australians will vote. On issues such as climate change, coal seam gas extraction, water management and basic decency in politics, voters in regional Australia are disillusioned. The old certainties of rural politics seem to be breaking down, and there is a heightened sense that the long-established structures amplifying country voices are no longer working.

More than a century ago, rural Australia was in a similar state of flux over how farmers should engage with state and federal politics. The 1913 federal election was a pivotal moment in the contest of ideas about what sort of polity and society rural Australians wanted. The alliances that emerged from the election led to the formation of the Country Party, the precursor to today’s National Party.

The 1913 election was called by the Labor prime minister, Andrew Fisher, a former coal miner and avid trade unionist. Fisher first served as PM in 1908-09, leading a minority government. When he attained a comfortable majority in both houses of the parliament at the 1910 election, he initiated an ambitious reform program that included liberalising disability and old age pensions, introducing maternity allowances and workers’ compensation, and enacting a progressive land tax on the unimproved value of the largest rural properties.

It was a considerable record on which to seek another term of government, but also contained elements that would galvanise resistance in rural Australia. 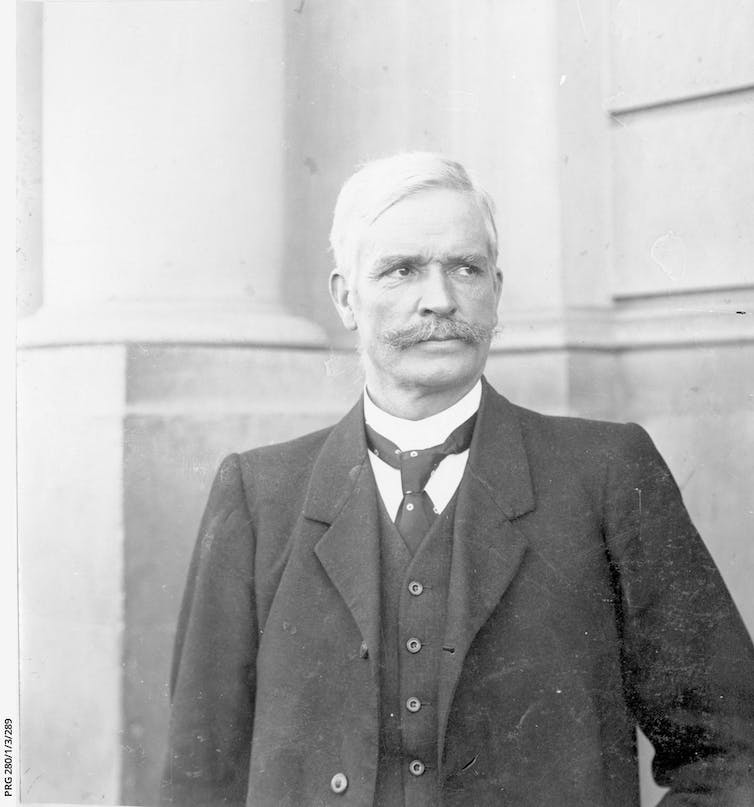 Prime Minister Andrew Fisher ran into considerable opposition to his reform agenda prior to the 1913 federal election. State Library of South Australia (PRG 280/1/3/289)

At the time, the New South Wales Farmers and Settlers Association (FSA) was emerging as a powerful and effective voice, claiming to represent farmers, both large and small. By 1914, it would boast 430 branches across the state.

The FSA executive opposed any form of land tax, even on the largest landholders, on suspicion that a Labor government would one day impose it on all farmers. However, farmers still struggling to acquire a “living area” were sympathetic to the Labor Party’s agenda, as many were once shearers or rural labourers.

When a resolution was proposed at the FSA conference in 1907 that would bar members of the Labor Party from joining the organisation, a Jerilderie delegate objected that such a motion would “cause disastrous splits in families the members of which included supporters of both organisations”. During that same period, senior members of the FSA executive resigned rather than renounce Labor sympathies.

Read more: Issues that swung elections: the 'credit squeeze' that nearly swept Menzies from power in 1961

By 1913, another issue had intensified the FSA executive’s antagonism towards Labor: the increasingly active Rural Workers Union (RWU).

The conservative government of George Reid, which held power in Australia from August 1904 to July 1905, had excluded large numbers of rural labourers from the federal Conciliation and Arbitration Act of 1904, arguing that the seasonal and unstructured nature of agricultural work made formal schedules of pay and conditions impractical.

The Labor Party contested this view, and in 1910, Fisher’s government amended the act to include rural workers. The RWU then sought registration with the Court of Conciliation and Arbitration as a first step towards achieving an industrial award mandating minimum wages and conditions of employment.

Then, in early 1913, the RWU began negotiating with the powerful Australian Workers Union, which represented shearers and shearing shed hands, with the aim of amalgamating into one big rural union.

This provoked significant disquiet in FSA branches. The FSA executive, led by the articulate and politically astute farmer Robert Patten, redoubled its efforts to energise and expand its membership among small-scale farmers and their families, encouraging them to align themselves firmly on the side of capital.

In the midst of these developments, Fisher called an election for the middle of 1913. He was opposed by Joseph Cook who, like Fisher, was a British migrant with a coal mining background.

Cook entered the new federal parliament in 1901, and by 1909, had become deputy leader in Alfred Deakin’s Commonwealth Liberal Party – a new, anti-Labor coalition, or “fusion,” of members formerly associated with Free Trade and Protectonist alliances. (It was also a predecessor of the modern Liberal Party.) Cook then became leader of the opposition when Deakin resigned in January 1913.

Read more: Cultivating a nation: why the mythos of the Australian farmer is problematic

Fisher presented six referendum questions to the electorate to coincide with the 1913 election. Each was designed to extend Commonwealth powers in light of the High Court’s unsympathetic rulings on aspects of his reform agenda. All six proposals were rejected by a slim margin – a sign the electorate was perhaps wary of the pace and breadth of Fisher’s reform agenda.

In the election itself, the country vote would prove to be crucial.

Like the referendums, the House of Representatives election was tight. The main parties were separated by only 9,000 of the 1.85 million total votes cast.

Labor entered the election holding nine more seats than the opposition, picking up seats in the big cities and Victorian regional centres of Bendigo and Ballarat. But in rural areas, the Liberal Party prevailed, picking up four Labor seats alone in Victoria.

In New South Wales, the FSA endorsed supporters of its platform running as opposition candidates in seven seats. Four of them deposed sitting Labor Party members, including Patten, who defeated the pro-Labor independent William Lyne in Hume. It was the last seat declared, and Cook won government with a majority of one.

But Cook’s victory was short-lived. By the time he had selected a speaker, his majority had disappeared, and Australians would be back at the polls by mid-1914, just as war broke out in Europe.

The election would have a longer-lasting legacy with the organisation of rural voters into a sizeable – and powerful – voting bloc with a dedicated, conservative presence in federal politics. The Country Party emerged as an independent and distinctly rural voice during the war and held the federal balance of power by 1922.

Australia’s population was already drifting to the cities when the Country Party formed, but that has not prevented the rural vote from continuing to exert a strong, often disproportionate, influence on Australian politics.

As in 1913, the 2019 election could prove to be a decisive moment in shifting rural political alliances, with broader consequences.