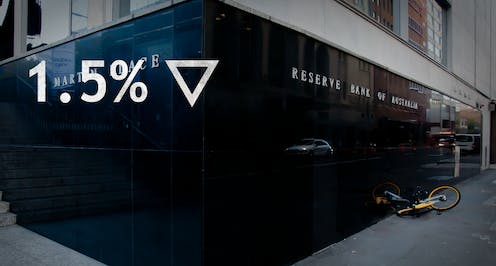 Unbelievably, given that he hasn’t moved interest rates once during his entire 33 months as governor, financial markets have Reserve Bank chief Philip Lowe odds on favourite to cut them on Tuesday, just a week and a half before we vote.

What they might be missing is that during an election campaign, a case to adjust rates isn’t enough. The case to wait must be weak as well.

The case for cutting is strong, and weak

Inflation is shockingly low. The headline rate for the March quarter was zero. When averaged, the Reserve Bank’s measures of so-called underlying inflation produce a rate for the year to March of 1.4%.

The bank’s current forecast of an underlying inflation rate of 1.75% by the middle of the year will be missed by a lot. The forecast itself was well short of the bank’s 2% to 3% target. The bank will under pressure to downgrade the forecast or explain why it hasn’t when it releases its quarterly update on Friday.

In the absence of an election, it builds a case for an immediate rate cut. Lower inflation raises real interest rates and constitutes an unwanted tightening of monetary conditions. It also puts upward pressure on the dollar.

However, there are reasons to think that structural changes to the world’s economy make this framework is not as relevant as it used to be. Inflation is subdued around the world, yet the global economy is growing and unemployment is low.

In the new environment it isn’t at all clear that even lower interest rates would have a meaningful effect on inflation. Given that the present cash rate is at 1.5%, they would certainly ensure that the bank had less capacity to seriously cut when it was seriously indicated.

The case for waiting is anything but weak

Senior Reserve Bank officials keep intimating that the biggest trigger for the next cut will be rising unemployment. They have said they expect inflation to remain low and that the climb back to 2% will be gradual.

Cutting now would respond to one of these conditions: a low inflation rate.

The April board minutes read as argument for stability:

Given this outlook for further progress towards the bank’s goals, members agreed that there was not a strong case for a near-term adjustment in monetary policy. Members recognised that it was not possible to fine-tune outcomes and that holding monetary policy steady would enable the Bank to be a source of stability and confidence.

The latest economic news has not been bad. The loss of momentum in the second half of 2018 doesn’t seem to continued in 2019. Indicators of consumer spending, consumer confidence, housing activity and business spending appear to have stabilised.

And the new information the board has received since its last meeting has on balance been positive, including a short term fiscal stimulus (presented as a tax package) announced in the budget.

In the global economic environment, indicators show signs of improvement with many equity markets hitting new highs. Global financial conditions remain easy. Asset and commodity prices are strong. Global unemployment is lower than it has been in years. There are no signs of economic or financial strains creating an urgent need to act.

It makes the case for further inaction while the bank waits and watches strong.

And some of us are savers

Often left out of discussion of rates is their effect on savers.

This was noted a few years ago by the then governor Glenn Stevens, who reported receiving letters from upset savers - typically retirees - complaining about the impact of lower rates on their incomes.

Assuming that a cut in the cash rate cuts term deposit rates by a similar amount (as it usually does) then as the Reserve Bank’s cash rate approaches zero the impact of cuts in it has bigger and bigger effects on retirees’ incomes.

It’s not only retirees that are hurt. Young people saving for housing deposits, small businesses and non-profits also use term deposits. Many have substantial operational funds sitting on deposit with banks and will be seriously hurt by lower rates. They might even effect their ability to hire, invest and pay higher wages.

Our political class would find it hard to believe that after two and a half years of inaction, the Reserve Bank board suddenly needed to cut rates ten days out from an election.

For that reason alone, even if the latest inflation figures presented a compelling case for cutting rates, the case for doing nothing would remain quite strong.

It’ll be up to the board, meeting at the Reserve Bank’s Martin Place headquarters in Sydney on Tuesday morning.

Ultimately rates may need to be adjusted at some point, but for now there seems enough evidence to justify sitting back and waiting throughout the election campaign, and perhaps beyond, to see how the economy performs in the second half of the year.

Read more: Vital signs. Zero inflation means the Reserve Bank should cut rates as soon as it can, on Tuesday week