To mark the International Year of the Periodic Table of Chemical Elements we’re taking a look at how researchers study some of the elements in their work.

Today’s it’s titanium, a metal known for its strength and lightness so it’s ideal for making replacement hips, knees and other parts of our bodies, but it’s also used in other industries.

Titanium gets its name from the Titans of ancient Greek mythology but this thoroughly modern material is well suited to a huge range of high-tech applications.

With the chemical symbol Ti and an atomic number of 22, titanium is a silver-coloured metal valued for its low density, high strength, and resistance to corrosion.

I first studied titanium via a Master’s degree at the Institute of Metal Research in the Chinese Academy of Sciences in 1999. One of my projects was to investigate the formation of titanium alloys for their high-strength characteristics.

Since then, the applications for this metal have grown exponentially, from its use (as titanium dioxide) in paints, paper, toothpaste, sunscreen and cosmetics, through to its use as an alloy in biomedical implants and aerospace innovations.

Particularly exciting is the perfect marriage between titanium and 3D printing.

Titanium materials are expensive and can be problematic when it comes to traditional processing technologies. For example, its high melting point (1,670℃, much higher than steel alloys) is a challenge.

The relatively low-cost precision of 3D printing is therefore a game-changer for titanium. 3D printing is where an object is built layer by layer and designers can create amazing shapes.

This allows the production of complex shapes such as replacement parts of a jaw bone, heel, hip, dental implants, or cranioplasty plates in surgery. It can also be used to make golf clubs and aircraft components.

Even beer containers benefit from 3D printing with titanium.

The CSIRO is working with industry to develop new technologies in 3D printing using titanium. (It even made a dragon out of titanium.)

Advances in 3D printing are opening up new avenues to further improve the function of customised bodypart implants made of titanium.

Such implants can be designed to be porous, making them lighter but allowing blood, nutrients and nerves to pass through and can even promote bone in-growth.

Safe in the body

Titanium is considered the most biocompatible metal – not harmful or toxic to living tissue – due to its resistance to corrosion from bodily fluids. This ability to withstand the harsh bodily environment is a result of the protective oxide film that forms naturally in the presence of oxygen.

Its ability to physically bond with bone also gives titanium an advantage over other materials that require the use of an adhesive to remain attached. Titanium implants last longer, and much larger forces are required to break the bonds that join them to the body compared with their alternatives.

Titanium weighs about half as much as steel but is 30% stronger, which makes it ideally suited to the aerospace industry where every gram matters.

In the late 1940s the US government helped to get production of titanium going as it could see its potential for “aircraft, missiles, spacecraft, and other military purposes”.

About 39% of the US Air Force’s F22 Raptor, one of the most advanced fighter aircraft in the world, is made of titanium. 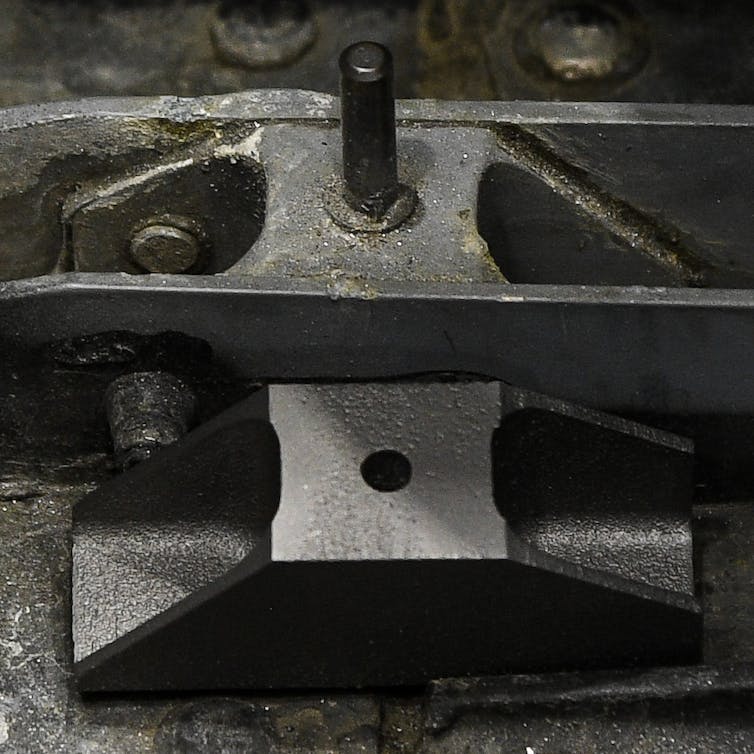 A titanium 3D printed part (bottom) alongside the aluminum part (top) it will replace on an F-22 Raptor: the titanium part will not corrode, can be procured faster, and costs less. US Air Force photo by R. Nial Bradshaw

Civil aviation moved in the same direction with Boeing’s new 787 Dreamliner made of 15% titanium, significantly more than previous models.

Two key areas where titanium is used in airliners is in their landing gear and jet engines. Landing gear needs to withstand the massive amounts of force exerted on it every time a plane hits a runway.

Titanium’s toughness means it can absorb the huge amounts of energy expelled when a plane lands without ever weakening.

Titanium’s heat resistance means it can be used inside modern jet engines, where temperatures can reach 800℃. Steel begins to soften at around 400℃ but titanium can withstand the intense heat of a jet engine without losing its strength.

Where to find titanium

In its natural state, titanium is always found bonded with other elements, usually within igneous rocks and sediments derived from them.

Ilmenite is most abundant in China, whereas Australia has the highest global proportion of rutile, about 40% according to Geoscience Australia. It’s found mostly on the east, west and southern coastlines of Australia.

Both materials are generally extracted from sands, after which the titanium is separated from the other minerals.

Being among the top ten most abundant elements in Earth’s crust, titanium resources aren’t currently under threat – good news for the many scientists and innovators constantly looking for new ways to improve life with titanium.

How to make a dragon using titanium!

If you’re an academic researcher working with a particular element from the periodic table and have an interesting story to tell then why not get in touch.