Climate change threatens Australia in many different ways, and can devastate rural and urban communities alike. For Torres Strait Islanders, it’s a crisis that’s washing away their homes, infrastructure and even cemeteries.

The failure to take action on this crisis has led a group of Torres Strait Islanders to lodge a climate change case with the United Nations Human Rights Committee against the Australian federal government.

It’s the first time the Australian government has been taken to the UN for their failure to take action on climate change. And its the first time people living on a low lying island have taken action against any government.

This case – and other parallel cases – demonstrate that climate change is “fundamentally a human rights issue”, with First Nations most vulnerable to the brunt of a changing climate.

The group of Torres Strait Islanders lodging this appeal argue that the Australian government has failed to take adequate action on climate change. They allege that the re-elected Coalition government has not only steered Australia off track in meeting globally agreed emissions reductions, but has set us on course for climate catastrophe.

In doing so, Torres Strait Islanders argue that the government has failed to uphold human rights obligations and violated their rights to culture, family and life.

This case is a show of defiance in the face of Australia’s years of political inertia and turmoil over climate change.

It is the first time people living on a low-lying island – acutely vulnerable in the face of rising sea levels – have brought action against a government. But it may also be a sign of things to come, as more small island nations face impending climate change threats.

Driving this case is an alliance of eight Torres Strait Islanders, represented by the Torres Strait land and sea council, Gur A Baradharaw Kod, along with a legal team from ClientEarth and 350.org. They argue that their way of life has come under immediate and irreversible threat.

On this basis, they accuse the Australian government of breaching multiple articles of the UN Human Rights Declaration, including the right to culture, the right to be free from arbitrary interference with privacy, family and home, and the right to life.

Securing these rights were made possible through the historic Mabo Decision, and these rights remain central to land and human rights debates today as Torres Strait Islanders’ land and seas are threatened by climate change.

Torres Straight Islanders are on the frontlines

Some Torres Strait Islands are less than one metre above sea level and are already affected by climate change. 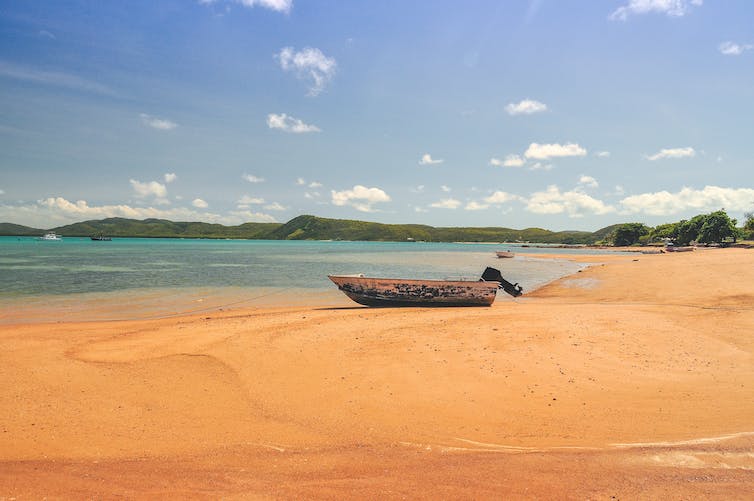 Thursday Island in the Torres Strait. The ancestral lands of these islands are being washed away by sea level rise from climate change. Shutterstock

In the same way settler colonial violence dispossessed First Nations people from their ancestral homelands, climate change presents a real threat of further forced removal of people from their land and seas, alongside destruction of places where deep cultural and spiritual meaning is derived.

Parallel threats across the Pacific

Delegates at the Pacific Islands Forum in Fiji last week described climate change as the “single greatest threat” to the region, with sea level rise occurring up to four times the global average in some countries in the Pacific.

Climate change is already causing migration across parts of the Pacific, including relocation of families from the Carteret Islands to Bougainville with support from local grassroots organisation Tulele Peisa.

The Alliance of Small Island States, an intergovernmental organisation, has demanded that signatories to the Paris Agreement, including through the Green Climate Fund, recognise fundamental loss and damages communities are facing, and compensate those affected.

The growing wave of climate litigation

Across the Torres Strait, the Pacific, and other regions on the frontline of climate change, there are a diversity of responses in defence of land and seas. These are often grounded in local and Indigenous knowledge.

They show the resolve of First Nations and local communities, as captured in a message from the Pacific Climate Warriors:

We are not drowning. We are fighting.

There are parallel appeals to the Torres Strait Islanders’ case. Around the world, First Nations people are calling on the UN to hold national governments to account on human rights obligations, including in the context of mining and other developments that drive greenhouse gas emissions.

There is an array of other climate litigation underway. This includes citizens suing their governments for failing to take action on climate, such as in the Netherlands, where a judge ordered the government to take hefty action to reduce national emissions.

Similarly, a group of 21 children in the United States are pursuing a lawsuit to demand the right to a safe climate.

Given the parlous state of climate politics in Australia, further litigation can be expected. The significance of the current appeal by a group of Torres Strait Islanders lies in its potential to lay bare the adequacy or otherwise of Australia’s response to climate change as a human rights issue.

First Nations people already have a moral authority in defending their human rights in the era of climate change. Over time, they and others, including children, will also test the grounds on which they might have the legal authority to do so.