The payment for ecosystem services (PES) model is supporting a new wave of self-determined construction on Aboriginal homelands.

With no secure strategy for government infrastructure investment in homelands, particularly in new housing or new homelands, PES provides an alternative approach to support meaningful livelihoods on Country. Importantly, revenue from PES can support self-determined and appropriate building there.

Read more: Building in ways that meet the needs of Australia’s remote regions

PES can attract funding from government, such as for ranger programs, and from private sources, in the form of carbon credits and corporate social responsibility funds. Research suggests it’s also “crucial for improving social outcomes for Indigenous communities”.

Other researchers argue that PES is “most effective” on remote Aboriginal homelands and outstation settlements where it fundamentally values cultural knowledge and where the vastness of the landscape allows for economies of scale.

On remote Aboriginal land, PES is often one of the few enterprise opportunities. That’s due to such restrictions as distance from economic centres, poor access, skilled labour shortages and limitations on Aboriginal land tenure, in particular the limited capital and security held. Commonwealth laws prevent the buying and selling of this land.

The example of Kabulwarnamyo outstation 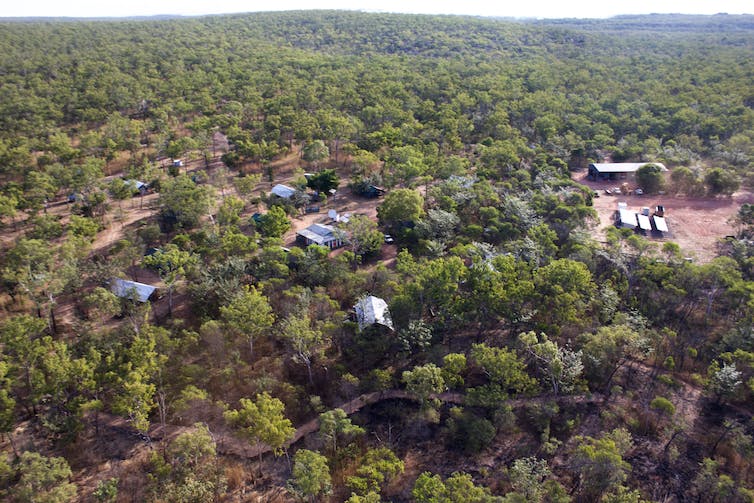 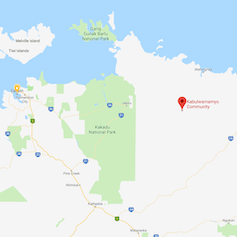 Kabulwarnamyo outstation displays how PES activities simultaneously cause and provide a way of meeting the demand for buildings on remote Aboriginal land. And often this happens in ways that are more responsive to the local context than current government-provided alternatives.

Kabulwarnamyo is a small outstation of about 50 people on Warddeken Country in West Arnhem Land, Northern Territory, about an eight-hour drive from Jabiru. It is extremely remote and cut off for up to five months of the year during the wet season.

Established in 2002, Kabulwarnamyo is managed by the not-for-profit company Warddeken Land Management. This followed the Aboriginal and Torres Strait Islander Commission’s (ATSIC) moratorium on creating new homelands due to the Australian government no longer funding the building of houses on them.

Read more: Who decides? A question at the heart of meaningful reconciliation 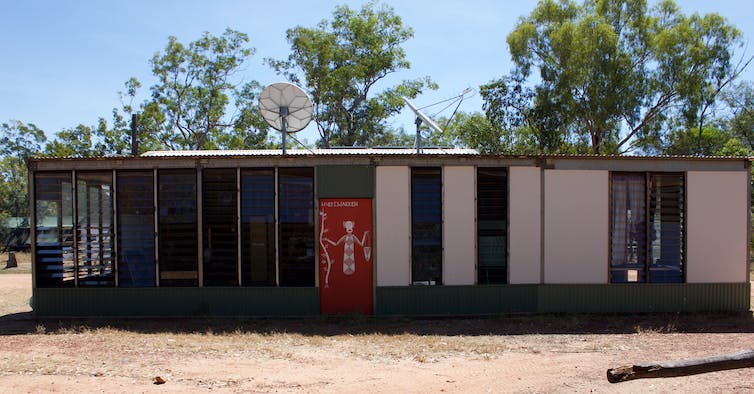 PES activities – namely carbon abatement and biodiversity conservation – are the core business of Warddeken. However, it also built 14 dwellings on the outstation using an A$80,000 grant from the NT government and PES funds from the sale of carbon credits to multinational energy company ConocoPhillips.

The flexibility of the carbon credit funds meant Warddeken could build in ways that directly responded to the needs of the people, rather than adhering to centrally determined regulations, which typically drive up building costs.

To establish Kabulwarnamyo, the Warddeken rangers, who are traditional owners and residents of the outstation, self-built an office and 14 balabbala (traditional Warddeken shade shelters). A number of versions have been developed over time. Each balabbala consists of a raised timber platform floor on steel rails with local cypress pine posts and two trucking tarpaulins as a roof. 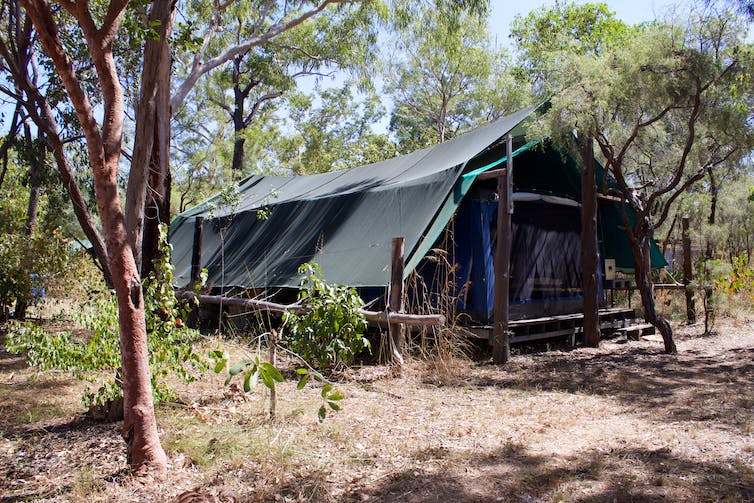 Dome or safari tents are pitched on the platforms to provide sleeping spaces and privacy for occupants. The structures have solar-powered electricity and hotplates for cooking using bottled gas. A creek-fed pump provides water. A separate structure houses a shower and long-drop toilet.

Excluding wages for construction staff, each balabbala costs A$15,000. These simple structures do not adhere to public housing standards, but do meet crucial local needs. The balabbala project has allowed Warddeken rangers to conduct PES activities and maintain cultural connections to Wardekken Country in the absence of government funding for services support.

As Warddeken’s business has developed, so too have the building typologies. In 2015, Warddeken self-built a school to enable children to also return to living on Country. The school is a modified and extended balabbala, built using Warddeken Land Management core funds. 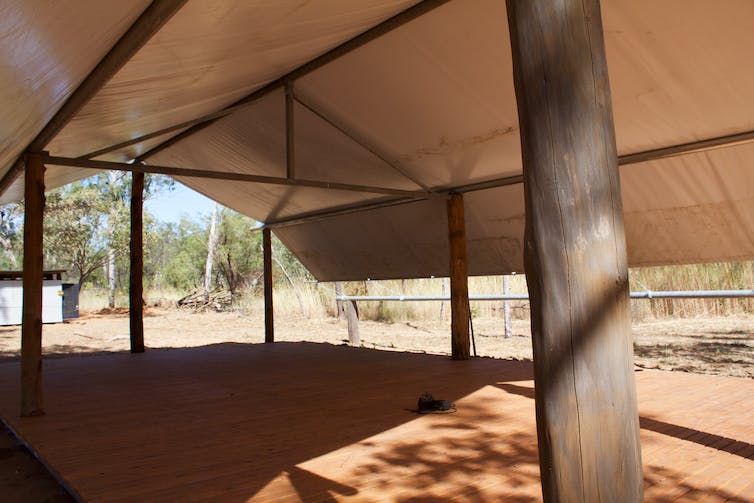 The Kabulwarnamyo school is a modified balabbala with a central truss that eliminates the need for a central pole. Hannah Robertson (2015), Author provided

A crowdfunding campaign raised ongoing teaching funds. Financing the running costs of the school remains a challenge. Unlike remote non-Indigenous townships, there is little NT government support for homeland education.

The school, like the balabbalas, represents this community’s reinvestment of PES-derived funds to meet their crucial needs in innovative ways. The Nawarddeken Academy was formally registered as an independent school in December 2018. It is clear these unconventional buildings are fit for purpose and satisfy the registration requirements of the NT Department of Education. 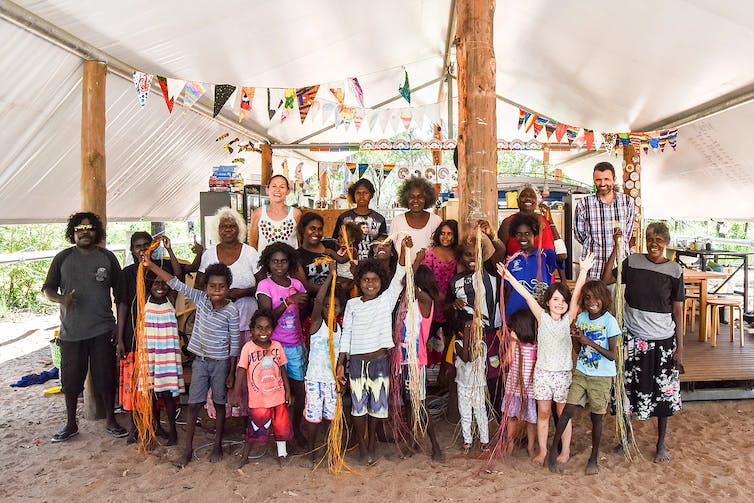 The self-built independent school has been formally registered with the NT Department of Education. Image: Bjorn Everts/Nawarddeken Academy, Author provided (No reuse)

PES-enabled balabbala are not the ideal solution for building development on homelands. But here they are appropriate because they are simple and largely suited to the environment and the cost of building them matches available funds. Warddeken CEO Shaun Ansell has said:

What we do at Kabulwarnamyo is appropriate for our resourcing, environment and capacity, but it’s not proper housing. If we had the capacity to build beautiful mud brick houses for everyone we would.

There are long-term plans to improve the balabbala using locally sourced stone for half-walling. This will retain the structures’ passive ventilation properties while improving protection during the wet season and cold weather. The structures can therefore be seen as staged projects, improved as resources become available. 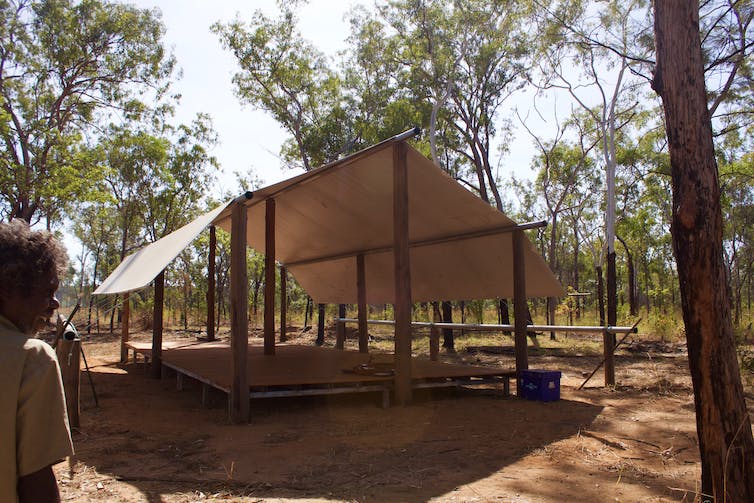 A newer version balabbala under construction. The rails are now steel so the structure lasts longer and the white tarp has higher reflectivity than the darker versions. Hannah Robertson (2015), Author provided

Most importantly, the balabbala provide significant social returns to local Nawarddeken. A 2014 report by Social Ventures Australia, commissioned by the Department of Prime Minister and Cabinet, documented significant social, environmental, economic and cultural benefits as a result of PES investments at Kabulwarnamyo. It estimated the value of these outcomes at A$55.4 million for the financial years 2009-15 – a return on investment of $3.40 for every dollar invested.

Lessons from the Warddeken experience

The Warddeken experience shows us the policy conditions that could support building and PES enterprises on other remote Aboriginal lands. These are:

As Warddeken has shown, buildings play a critical role in enabling PES. The flip side of this is that PES supports building in response to locally identified needs.

PES provides extensive environmental benefits, but it is the broader social and cultural returns, such as maintaining connections to Country and creating sustainable livelihoods, that are most meaningful on remote Aboriginal land.

The Conversation is co-publishing articles with Future West (Australian Urbanism), produced by the University of Western Australia’s Faculty of Architecture, Landscape and Visual Arts. These biannual collections of articles look towards the future of urbanism, taking Perth and Western Australia as its reference point. The latest series looks at the notion that urbanism is shaped by design enterprise. You can read other articles here.