Four men – three Russians and one Ukrainian – will be charged in relation to the shooting down of the Malaysia Airlines flight MH17, which killed all 298 passengers and crew on board.

Dutch prosecutors will launch a criminal trial in The Hague on March 9, 2020. But the accused are beyond the jurisdiction of the court, and will most likely be tried in absentia. This means the accused will not be physically present in the court room.

The prosecutors argue the four accused were jointly responsible for obtaining a BUK TELAR missile launcher (a launcher for self-propelled, surface-to-air missiles allegedly owned by the Russian military) in the city of Kursk, and launching it from Ukraine.

They say the four men are responsible for the atrocity because they had the intention to shoot down an aircraft, and obtained the missile launcher for that purpose.

While investigators have not accused any suspects of actually firing the missile, they say in future they may identify others with that responsibility.

For the victims and their loved ones, these Dutch criminal trials present the best hope of legal acknowledgement for the tragedy.

On July 17, 2014, flight MH17 was travelling from Amsterdam to Kuala Lumpur when it was shot down over Ukraine.

The Joint Investigative Team (JIT), led by Dutch authorities and comprising investigators from Malaysia, Australia, Belgium and Ukraine, concluded in 2016 that the flight was shot down by a Russian BUK missile.

The JIT identified the launch location as a field in eastern Ukraine, which at the time was in territory controlled by pro-Russian fighters.

The countries central to the investigation – including Australia, which lost 38 people – and the victims’ families have explored a range of legal strategies to assign blame for the attack.

Then Foreign Minister Julie Bishop initially proposed a war crimes trial for MH17, but this was vetoed by Russia in the UN Security Council.

Some civil claims on behalf of victims’ families are ongoing before the European Court of Human Rights.

And hearings are ongoing before the International Court of Justice, where Ukraine seeks to make a case against Russia. Ukraine cites the MH17 atrocity as characteristic of broader Russian aggression and lack of respect for Ukrainian sovereignty and independence.

The Russian Foreign Ministry rejected this week’s announcement, in line with its earlier rejections of the JIT conclusions. It said:

Once again, absolutely groundless accusations are being made against the Russian side, aimed at discrediting the Russian Federation in the eyes of the international community.

Russian President Vladimir Putin earlier called the crash a “terrible tragedy”, but said Russia bore no responsibility for it.

Russian officials have claimed they were prepared to assist the investigation but had been “frozen out” of it.

Who are the accused?

Three of the four accused are Russian nationals, believed to be living in Russia.

Igor Girkin is a former colonel in the Russian security service. At the time of the atrocity, Girkin was the minister of defence in the so-called Donetsk People’s Republic, a pro-Russian separatist region of Ukraine.

The other two Russian accused, Sergey Dubinsky and Oleg Pulatov, are former Russian military intelligence agents who worked under Girkin.

Leonid Kharchenko is the only Ukrainian national accused. Investigators are not certain of his current location. At the time of the atrocity, Kharchenko led a separatist combat unit. 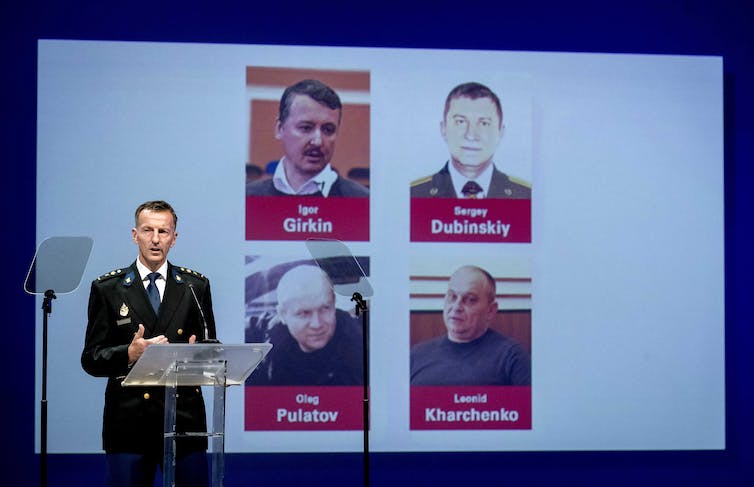 Wilbert Paulissen of the Joint Investigation Team (JIT) at a press conference in Nieuwegein, The Netherlands. Dutch prosecutors will put four people on trial over the shooting down of flight MH17. Robin Van Lonkhuijsen/EPA

The specific charges in relation to the four named suspects will be:

The investigation is ongoing and continues to call for witnesses to assist.

What are the prospects for the trial?

Dutch investigators will issue international arrest warrants for the four accused and place them on international wanted lists. But they won’t issue extradition requests because they know already that no extradition of nationals is available under the Ukrainian or Russian constitutions.

It seems impossible for the Dutch court to gain actual jurisdiction over the Russian accused. Potentially, should Ukrainian authorities apprehend Kharchenko, he could be tried via video-link.

The Netherlands and Ukraine have entered into an agreement that would permit such an arrangement and - should Kharchenko be convicted - allow for his imprisonment in Ukraine.

The charges and any penalties originate in Dutch, rather than international, criminal law. Convictions for murder or the intentional downing of an aircraft could result in sentences of up to life imprisonment.

It’s fair to question the value of a prosecution without a court having actual jurisdiction over the accused. The only real answer is that such a trial would enable the presentation and adjudication of evidence and the judgement of a court as to whether charges are made out. 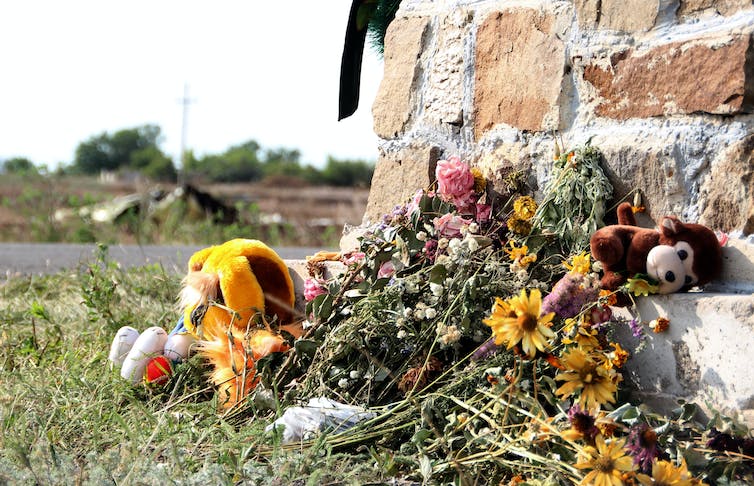 A memorial for the victims of MH17 in the Donetsk region, Ukraine. Shutterstock

As time goes, the chances of successful prosecutions decline. Meanwhile, interested countries and the victims’ families continue to call for legal redress for the atrocity.

It is also legitimate to ask whether a court can ensure a fair trial for accused persons tried in absentia.

Although it is not explicitly prohibited by international human rights law, the absence of defendants and presumably any legal representative from the courtroom means the accused will not hear the evidence against them or have the ability to present a defence.

Given the four named accused are beyond the actual jurisdiction of the Dutch courts, it can be argued that they (and, at least in the case of Russia, their country) are wilfully avoiding the process of justice. This may be, for some or many observers, sufficient justification for trying them in their absence.