What a weekend it’s been: global leadership, diplomacy and theatrics, all at play on the world stage. US President Donald Trump – never one to shy away from the spotlight — has dominated. Significant breakthroughs, including a pause in the escalating China-US trade war and the resumption of dialogue between the US and North Korea, have been achieved.

One might question the strategy and motivations behind Trump’s latest diplomatic engagements. Known for his unorthodox approach to diplomacy, Trump’s latest activities are more likely driven by the prospect of a fight in the 2020 US elections than a genuine concern for regional and global stability. Trump’s turn towards dialogue has averted the immediate disaster of a trade war and confrontation with North Korea, but the longer-term implications point to a more significant shake-up in global diplomacy.

As host of the 2019 G20 summit, Japan’s Prime Minister Shinzo Abe is to be credited for his efforts in bringing global leaders together under what appeared to be difficult circumstances.

It was always going to be a tough meeting. Overshadowed by the US-China trade war, and set against a global backdrop of widening political fault lines, seething populism and fraying institutions, Abe certainly had his work cut out for him.

Just bringing together the leaders and other officials from 19 of the world’s biggest economies, plus the European Union, for a summit on global economic governance was, in itself, a major achievement. They were joined by a raft of invited guests, including the leaders of Singapore, Vietnam and Thailand, as well as representatives of key international organisations.

More importantly, it provided the much-needed platform for US-China dialogue, bringing the escalating trade war to a halt.

Ultimately, though, the G20 gains were limited. The final communiqué reflected the deep political tensions globally at the moment and the overriding domestic focus of many leaders. For example, it stopped short of affirming the G20’s customary commitment to anti-protectionist measures and included watered-down language on climate change action.

One might be forgiven for mistaking the leaders’ summit for a glorified photo opportunity. G20 pics – ranging from the rambling family photos of leaders and spouses to awkward moments on the sidelines — dominated the weekend Twittersphere.

Of course, optics matter, and the images revealed much about the diversity and dynamics at play within this “premier” economic forum. Trump’s friendly interactions with Russian President Vladimir Putin and Saudi Arabia’s Crown Prince Mohammad bin Salman, for instance, raised eyebrows and ire at home.

But it’s not all about the photo opps. The G20 leaders’ summit is the culmination of months of intense negotiations, and most importantly reinforces the underlying habits of cooperation so desperately needed for ongoing global economic stability. 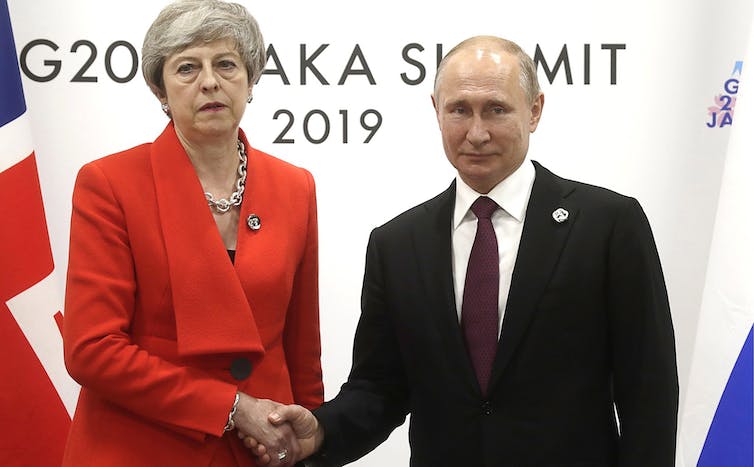 Theresa May and Vladimir Putin shared one of the weekend’s more cringe-worthy moments. Mikhail Metzel/Tass handout/EPA

As with any major summit, the G20 gathering offers the opportunity for leaders to engage in bilateral or minilateral discussions. For many, this is the main event, and for Abe, especially, the stakes on the sidelines at this G20 were high.

Saturday’s bilateral meeting between Trump and China’s President Xi Jinping did not disappoint, with both leaders agreeing to resume trade talks, stalled since the last G20 in Buenos Aires. Notably, Trump announced his suspension of some US$300 billion in threatened tariffs and eased restrictions on US companies selling components to Chinese telco, Huawei.

Other G20 sideline events, including Trump’s bilateral with Putin created their own drama, but it was Trump’s Saturday morning tweet suggesting a spontaneous visit with North Korean leader Kim Jong Un during his subsequent trip to Korea, that caught everyone off guard.

And with that, arrangements fell miraculously into place for Trump to take a historic first step for a sitting US president into North Korea, and for Kim and Trump to spend an hour in conversation in Freedom House on the South Korean side of the demilitarized zone.

Importantly, the two have now agreed to further talks intended to advance their ongoing denuclearization negotiations. Spectacle aside, there may well be positives to come from this interaction, but for the moment the endgame just isn’t clear.

Thumbs up for Morrison

To be fair, Morrison attended his first G20 summit in November just three months into his term as prime minister following the Coalition leadership spill. He was unknown and inexperienced at the time.

In Japan, Morrison was attending his first G20 as Australia’s elected leader, with decent summitry experience and far more established relationships with his global counterparts in place. His key message – that a US-China trade war was in nobody’s interests – was well-prepared, and it resonated with key G20 counterparts.

Other highlights for Morrison included his dinner on the eve of the summit with Trump. While the press pool may have been unimpressed, the fact that this was Trump’s first bilateral event of the summit is significant, even if it was, as some suggest simply to fill a gap in Trump’s program. Trump’s reflection on the US alliance with Australia, and Morrison’s election win with Australia was replete with praise. 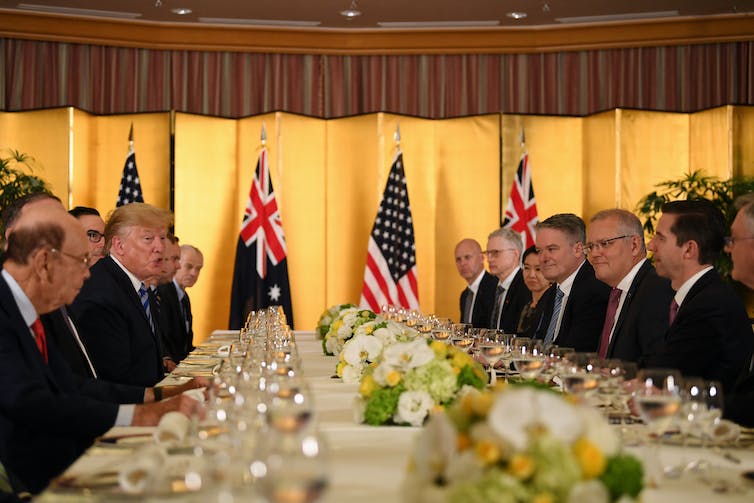 Scott Morrison had plenty of face-time with Donald Trump over the weekend. Lukas Coch/AAP

More importantly, though, Morrison’s win on curbing terrorist activities via social media was an important contribution to the summit outcome. G20 leaders were unanimous in their backing for the proposal that would increase pressure on tech giants like Facebook to block or remove the spread of violent extremism online.

The fact that Morrison shared news of the outcome with New Zealand Prime Minister Jacinda Ardern added to the credibility of the concept within the G20 grouping and lifted its profile at home.

No clear path ahead

In all, the G20 summit was an important exercise in diplomacy and resulted in a positive outcome for Abe. This sort of cooperation is so desperately needed if the institutions, rules and norms underpinning economic governance are to carry any weight at all. And as Japan hands the G20 reins over to the 2020 host, Saudi Arabia, supporting diplomacy and cooperation will be more important than ever.

Trump’s sideshow-style diplomacy certainly stole the limelight. The resumption of dialogue with both China and North Korea reaffirms the necessary place of diplomacy in the region. But Trump is navigating dangerous territory, and the lack of clear strategy, dubious motivations and self-serving tactics should have everyone – including his allies – on guard.