Just before the May federal election, then shadow treasurer Chris Bowen gave a speech in which he lamented the low levels of Year 12 students studying Mandarin in Australia. The speech was at a launch for Labor’s plan to deepen Australia’s engagement with Asia.

According to the launch’s media release, Labor’s strategy would include “improving Asian literacy and cultural understanding through school curriculums”.

Bowen mentioned that only about 130 Australians of non-Chinese heritage can speak Chinese to a level good enough to do business with China. In recent weeks, experts confirmed this number may be correct, although an educated guess.

For decades, Australian schools have focused on teaching Asian languages to strengthen our opportunities in Asia. One of the four target languages has been Standard Chinese, or Mandarin, the official language of mainland China.

If only 130 people of non-Chinese heritage can speak it after all these years, has something gone catastrophically wrong?

Given more than 500,000 Australians were born in China, there is a good chance most Mandarin-speaking Australians would be, to use Bowen’s term, of “Chinese heritage”. But it’s unclear why this is concerning.

Read more: Where are Chinese migrants choosing to settle in Australia? Look to the suburbs

From a purely academic perspective, these data suggest Australia is well placed to recruit Mandarin-speaking leaders in business, international relations, diplomacy and so forth, to strengthen our engagement with Asia.

Clearly, there is no critical shortage of fluent Mandarin speakers in Australia. There may be a shortage of Mandarin-speaking Australians entering into leadership positions, but that is an entirely different discussion.

Read more: How Australia’s Mandarin speakers get their news

These figures are similar to those for Japanese, which is the most popular language taught in Australian schools. In 2015 there were estimated to be just over 210,000 students studying Japanese at school in Australia. Following a similar pattern to Mandarin, only 572 of those students were in the upper years of secondary school.

What does success mean?

Not all language students start at the same proficiency level. The Australian Curriculum has five different streams for students of Mandarin to accommodate a range of different starting levels of proficiency.

Read more: What languages should children be learning to get ahead?

We need to think carefully about what we mean by success in language learning. If speaking as a native speaker would, which is what might be required for someone to be able to conduct business in China, is the measure of success, all language classes will perform poorly. A school student in China will learn about 6,000 written characters by the time they graduate. By comparison, a Year 12 student in Australia will graduate with a knowledge of only about 500 characters. 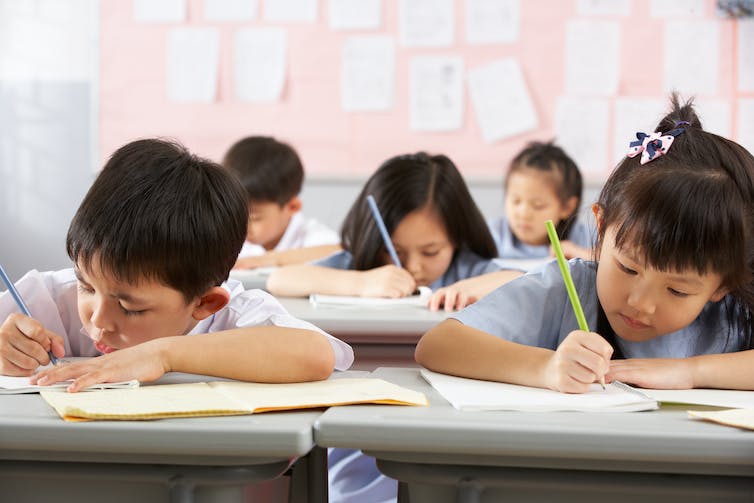 By the time a school student in China graduates, they will have learnt about 6,000 written characters. from shutterstock.com

Even languages that don’t have large numbers of characters are almost impossible to master in the small amount of time allocated to language classes in Australian schools.

In the same way, if winning an Olympic gold medal were the measure of success of sports classes, then they also have been a monumental failure. There have only been 267 Australian gold medallists in all Summer and Winter Games since 1896.

The same could be said for any other subject in which achieving such rare levels of excellence is considered to be the only measure of success.

Why else would you study Mandarin?

Evidence suggests there are multiple benefits from learning a second language beyond achieving native-like mastery of the language itself. These include improvements in cognitive flexibility, decision-making, and intercultural competency.

None of these benefits requires the learner to be able to speak, read or write that second language as well as a native speaker.

Some of the questions we should be asking are:

The first two of these are regularly measured, or at least noted, by classroom teachers. But the others are often overlooked. It is difficult to know how successful our programs have been without measuring these things too.