River red gums, Eucalyptus camaldulensis, are among the most iconic of Australia’s eucalypts. They are the most widely distributed of all the eucalypts. They grow along rivers, creeks, waterways and flood plains where many Australians like to picnic, so most of us get to know and love them.

Read more: This centuries-old river red gum is a local legend – here's why it's worth fighting for

Formerly known as Eucalyptus rostrata, the species was one of the first eucalypts encountered in parts of Australia by European settlers. Curiously, the name camaldulensis comes from the Italian monastery of Camaldoli near Naples, where a specimen grown from seed in a private garden was given the name Eucalyptus camaldulensis in 1832. No one knows how the seed got to be there! 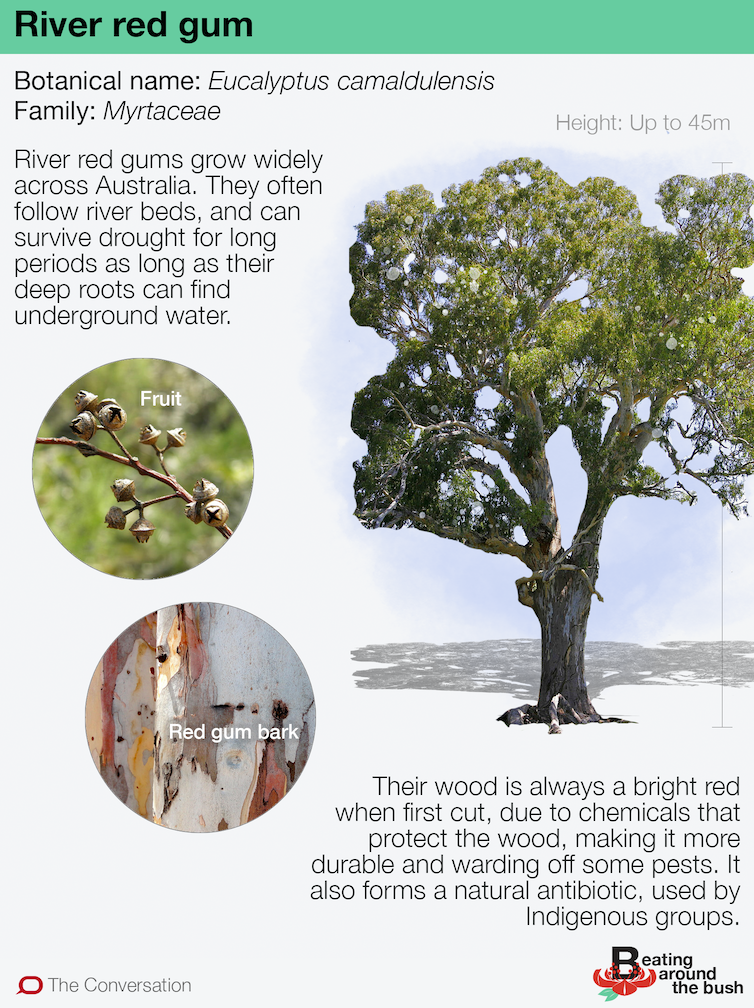 The Conversation River red gums can be very large spreading trees with huge trunks more than 5 metres around. In parts of Australia, such as along the Murray River, they can be very erect trees reaching more than 45m tall. Most specimens have smooth bark with a mottling of multiple colours ranging from creams to orange and red, but there may be a skirt of fibrous grey bark for the first few metres of the base. They are called river red gums because they grow along rivers and their wood when freshly exposed is a bright red; almost blood-coloured. River red gums have been used by Indigenous people for canoes, bowls, shields, and other utensils. The wood is red is because it contains very high levels of chemicals such as polyphenols, which are a natural antiobiotic when combined with air. 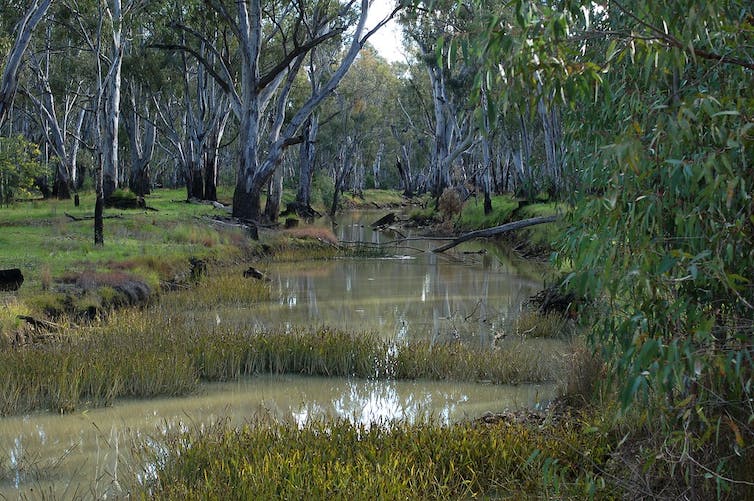 River red gums growing along the Murray River. Elizabeth Donoghue/Flickr, CC BY-NC-SA These chemicals not only protect the living tree from disease and some pest attacks, but make the timber very durable. These chemicals meant river red gums were used for medicinal purposes by Indigenous people. The wood has been widely used for railway sleepers, fence posts, and piers and wharfs where durability and water resistance are desirable. They have been widely planted overseas and in some countries pose a serious weed problem. The trees can have very long lives, and may reach 1,000 years of age. They grow very rapidly when conditions are favourable and so become large trees quite quickly. But as they get older it is very difficult to age them without damaging the tree and putting it at risk of disease and decay. So their ages are estimated, as no one wants to be responsible for killing a grand old tree just to confirm its age! Older specimens almost always develop large hollows, which can take centuries to form. The hollows provide refuges for birds, mammals and reptiles. The nesting sites are often raucously defended by brightly coloured parrots. The trees and the nectar from their small white flowers are also very important for honey production – a large tree in full flower over the warmer months can attract so many bees that the whole tree can be heard humming from many metres away; it’s a wonder the tree doesn’t take off. 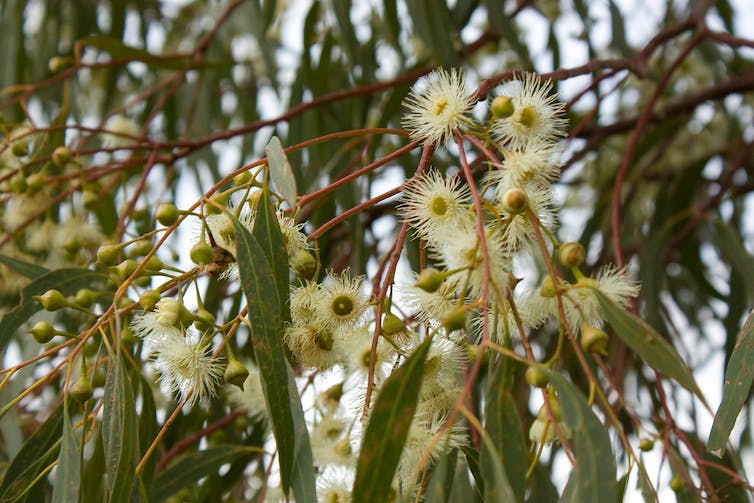 Trees in full flower can hum with bees. Rexness/Flickr, CC BY-NC-SA At certain times of the year, often during summer, river reds can be very heavily grazed by insects to the point where their leaves are skeletonised. The trees look as though they are about to die, but they are very resilient and a few months later most are back to a full and healthy canopy. Another insect, the psyllid, also feeds on and skeletonises the leaves. It has a sweet, waxy covering called a lerp that protects the vulnerable insect nymphs beneath. Some Indigenous groups scrape off the lerps, roll them into a ball, and eat them like a lolly. Surviving floods and driving rain Any tree that can live for a millennium must be adaptable, so like some other eucalypt species, river red gums can shed up to two-thirds of their foliage when soils dry out during a drought, which reduces water demand and prevents the trees from wilting. This shedding often causes people to complain about the trees when they grow in towns and cities, but when the rains come a few months later they rapidly produce new leaves and are soon once again in full canopy. Read more: The glowing ghost mushroom looks like it comes from a fungal netherworld River red gums can tolerate immersion in flood waters for up to nine months. They do this by having extensive roots, some of which contain a spongy, air-filled tissue called aerenchyma that allows for the accumulation and transport of much-needed oxygen in waterlogged soils. This adaptation to stressed soils also means river red gums can do quite well in disturbed urban soils when the urban sprawl impinges on their natural domain. River red gums readily seed after flooding events and great numbers of young trees may germinate. However, relatively few survive to maturity due to competition from other red gums, other trees, and weeds. They may also struggle to survive in some places due to a lack of water. Because river reds occur in some of the driest and harshest parts of the Australian mainland, you might think they are very efficient users of water. However, nothing could be further from the truth. The trees can have very deep, spreading and searching root systems, which tap into subterranean water, even if the water is many metres from the trunk. They are luxury water users with very little capacity for water use control. If water becomes really limiting, they simply wilt. Territorial trees E. camaldulensis produces a water-soluble chemical that is washed from its leaves by rain. These chemicals inhibit the growth of other plants, including river red gum seedlings, under the canopy. This phenomenon is called allelopathy, and along with a dense canopy inhibits plant growth under the trees. These chemicals are washed from the soil by flood water, which makes way for the germination of seedlings after floods. This is a wonderful mechanism that ensures seedlings do not germinate when conditions are dry and where they would compete with the parent tree for limited water, but germination is facilitated when there is plenty of water and soils are wet. 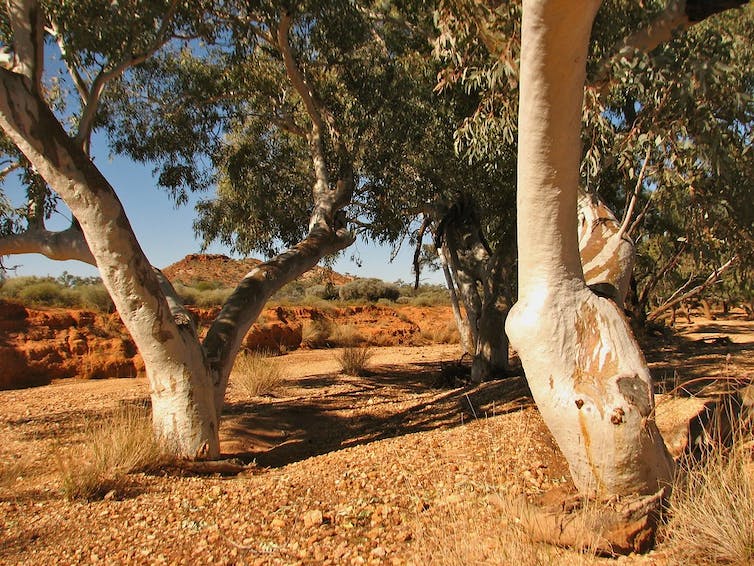 River red gums clear out the ground around them with toxic chemicals that discourage the growth of competitors. allelopathy/Flickr, CC BY-NC-SA Some people think river red gums are dangerous because they shed large limbs without warning on calm, still, summer days. There is no doubt this does happen, but there is no clear evidence they shed limbs more often than other species. The problem is complex, because they tend to grow everywhere people want to go. They provide shade along waterways on a hot, dry continent. In going to places where the trees grow, people tend to compact the soil with their vehicles and footpaths, which can be causes of limb shedding. The compaction of the soil affects soil moisture and aeration, which can lead to limb shedding. Read more: Warrigal greens are tasty, salty, and covered in tiny balloon-like hairs In other contexts such as farms where limbs are shed, many old river red gums are growing in highly disturbed or changed ecosystems. Furthermore, many of these remnant specimens are often stressed and getting older and so more prone to shedding. River red gums trace the watercourses of mainland Australia, and are easily seen from aeroplanes as you cross the continent. They connect the continental fringes with its arid heart. Their lives can span many human generations and it is nice to think that the majestic old trees that pull at our heartstrings have done the same to previous generations and, if we and they are lucky, will continue to do so for generations of Australians yet to come.