A freedom of information request has revealed Adani sought the names of CSIRO and Geoscience Australia scientists involved in reviewing groundwater management plans related to its proposed Carmichael mine.

Adani argued it required a list of people involved in the review so as to have “peace of mind” that it was being treated fairly and impartially on a scientific rather than a political basis.

Ten days before Adani’s request, Geoscience Australia’s acting director of groundwater advice and data reportedly raised concerns that Adani had “actively searched/viewed” his LinkedIn profile and that of a colleague.

Read more: Interactive: Everything you need to know about Adani – from cost, environmental impact and jobs to its possible future

Significantly, Adani’s request to the government was made before CSIRO and Geoscience Australia had reported their review findings back to the Queensland government.

While the federal Department of the Environment and Energy reportedly declined to hand over the names, the fact the letter was sent in the first place is concerning. It fundamentally interferes with the capacity of individual scientists to provide clear and informed evaluation. 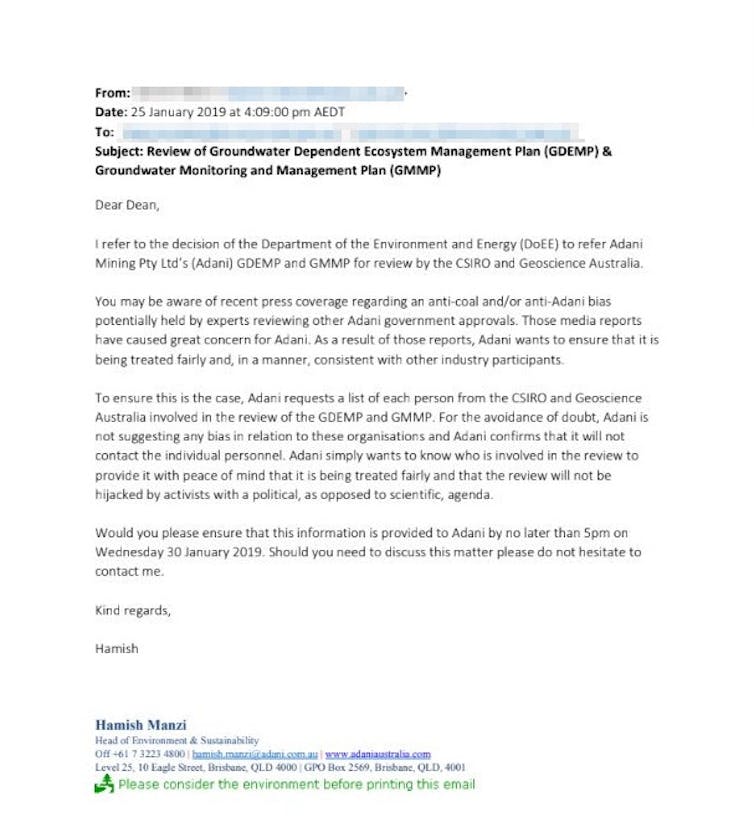 The letter obtained under freedom of information by environmental group Lock The Gate. Click to enlarge. Lock the Gate

The fair hearing rule requires a person – or company, in this case – to have an opportunity to be heard before a decision is made affecting their interest.

The rule against bias ensures the decision-maker can be objectively considered to be impartial and not to have prejudged a decision. This rule is flexible, and must be determined by reference to a hypothetical observer who is fair minded and informed of the circumstances.

There is no indication of any breach of procedural fairness in the environmental assessment process. The review of the groundwater management plan was conducted rigorously, according to the public interest.

The letter sent by Adani requesting the names of scientists was allegedly grounded in concerns about the possibility of anti-Adani activism by expert reviewers. Despite this, Adani made it clear that it was not explicitly alleging bias. Its objective, the letter said, was a desire to be “treated fairly and in a manner consistent with other industry participants”.

The real purpose of the letter

If Adani was seriously concerned about a breach of procedural fairness in the review of their groundwater management plan, it would have sought a judicial review. It did not – because there was no breach.

The scientists working at CSIRO and Geoscience Australia are all experts in their disciplines. They were engaged in the important process of determining whether Adani’s plan for managing groundwater around their mine would meet the environmental conditions of their mining licence. In other words, the scientists were doing their job.

Deputy Prime Minister Michael McCormack has said he “understands” Adani’s actions because of the delays associated with the review, but this is not how the system works.The delays occurred because the original plan submitted by Adani had to be revised following expert review, and the updated plan required detailed evaluation. The mine could potentially have a serious impact on groundwater, the communities and ecosystems dependent on the water, and the nationally significant Doongmabulla Springs; this deserves careful scrutiny.

As Adani has not brought an action for judicial review, the substantive purpose of the letter appears to be, as suggested by CSIRO representatives, to pressure scientists and potentially seek to discredit their work. The potentially chilling effect is clear.

Concern about climate change is not bias

The profound concerns raised by climate change and fossil fuel emissions are shared by many scientists around the world. The reports prepared for the International Panel on Climate Change make it clear that coal fired electricity must drop to nearly zero by 2050 to keep warming within 1.5℃.

This shared concern does not make scientists political activists. Nor does it prevent scientists from acting fairly and impartially when reviewing a groundwater management plan.

An acceptance of climate science and even a belief that coal-fired energy should be decommissioned does not constitute bias. A reasonable bystander would expect most environmental scientists to be concerned about climate change.

It is crucial the environmental assessment process for large coal mines remains rigorously independent and absolutely free from any direct or indirect pressure from the coal industry. This is even more important when dealing with groundwater assessments, given their economic, social and ecological significance.

The letter, sent before the review was handed down, sets a dangerous precedent. Not because it suggests the scientists were impartial or there was any procedural unfairness involved in the process. But rather, because it jeopardises the independence of our scientists who, in seeking to ensure the longevity of our water, food and energy resources, carry a heavy responsibility to the public interest.