The Pacific Islands Forum meeting in Tuvalu this week has ended in open division over climate change. Australia ensured its official communique watered down commitments to respond to climate change, gaining a hollow victory.

Traditionally, communiques capture the consensus reached at the meeting. In this case, the division on display between Australia and the Pacific meant the only commitment is to commission yet another report into what action needs to be taken.

The cost of Australia’s victory is likely to be great, as it questions the sincerity of Prime Minister Scott Morrison’s commitment to “step up” engagement in the Pacific.

Australia’s stance on climate change has become untenable in the Pacific. The inability to meet Pacific Island expectations will erode Australia’s influence and leadership credentials in the region, and provide opportunities for other countries to grow influence in the region.

An unprecedented show of dissent

When Morrison arrived in Tuvalu, he was met with an uncompromising mood. In fact, the text of an official communique was only finished after 12 hours of pointed negotiations.

While the “need for urgent, immediate actions on the threats and challenges of climate change”, is acknowledged, the Pacific was looking for action, not words. 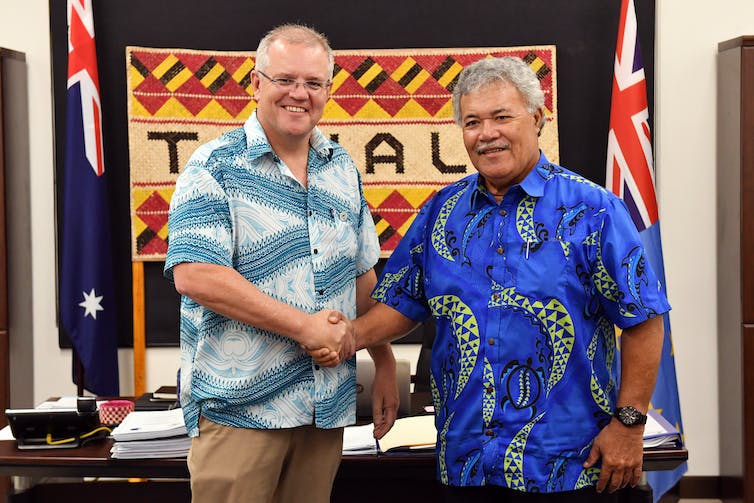 Morrison was met with an uncompromising mood in by leaders in Tuvalu. AAP Image/Mick Tsikas

I think we can say we should’ve done more work for our people.

Presumably, he would have hoped Australia could be convinced to take more climate action.

In an unprecedented show of dissent, smaller Pacific Island countries produced the alternative Kainaki II Declaration. It captures the mood of the Pacific in relation to the existential threat posed by climate change, and the need to act decisively now to ensure their survival.

And it details the commitments needed to effectively address the threat of climate change. It’s clear nothing short of transformational change is needed to ensure their survival, and there is rising frustration in Australia’s repeated delays to take effective action.

Australia hasn’t endorsed the alternative declaration and Canberra has signalled once and for all that compromise on climate change is not possible. This is not what Pacific leaders hoped for and will come at a diplomatic cost to Australia.

Read more: Response to rumours of a Chinese military base in Vanuatu speaks volumes about Australian foreign policy

Canberra can’t buy off the Pacific

Conflict had already begun brewing in the lead up to the Pacific Islands Forum. The Pacific Islands Development Forum – the brainchild of the Fijian government, which sought a forum to engage with Pacific Island Nations without the influence of Australia and New Zealand – released the the Nadi Bay Declaration in July this year.

This declaration called on coal producing countries like Australia to cease all production within a decade.

But it’s clear Canberra believes compromise of this sort on climate change would undermine Australia’s economic growth and this is the key stumbling block to Australia answering its Pacific critics with action.

As Sopoaga said to Morrison:

And a day before the meeting, Canberra announced half a billion dollars to tackle climate change in the region. But it received a lukewarm reception from the Pacific.

The message is clear: Canberra cannot buy off the Pacific. In part, this is because Pacific Island countries have new options, especially from China, which has offered Pacific island countries concessional loans.

As tension built at the Pacific Island Forum meeting, New Zealand Foreign Minister Winston Peters argued there was a double standard with respect to the treatment of China on climate change.

China is the world’s largest emitter of climate change gasses, but if there is a double standard it’s of Australia’s making.

Australia purports to be part of the Pacific family that can speak and act to protect the interests of Pacific Island countries in the face of China’s “insidious” attempts to gain influence through “debt trap” diplomacy. This is where unsustainable loans are offered with the aim of gaining political advantage.

But countering Chinese influence in the Pacific is Australia’s prime security interest, and is a secondary issue for the Pacific.

But unlike Australia, China has never claimed the moral high ground and provides an attractive alternative partner, so it will likely gain ground in the battle for influence in the Pacific. 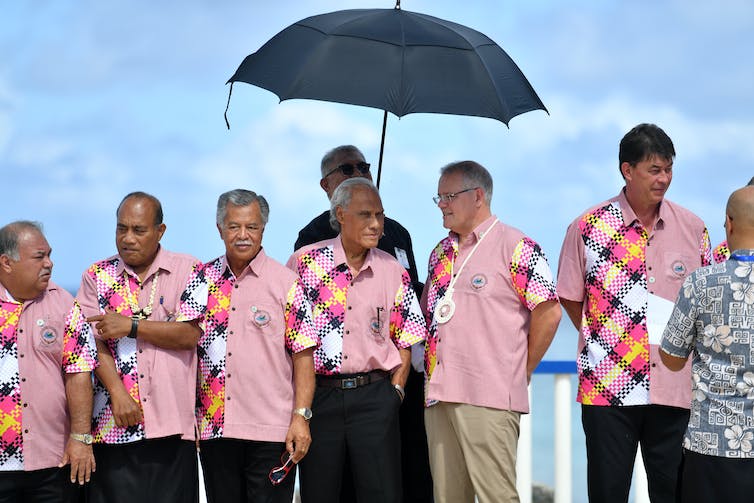 For the Pacific Island Forum itself, open dissent is a very un-Pacific outcome. Open dissent highlights the strains in the region’s premier intergovernmental organisation.

Australia and (to a lesser extent) New Zealand’s dominance has often been a source of criticism, but growing confidence among Pacific leaders has changed diplomatic dynamics forever.

This new pacific diplomacy has led Pacific leaders to more steadfastly identify their security interests. And for them, the need to respond to climate change is non-negotiable.

If winning the geopolitical contest with China in Pacific is Canberra’s priority, then far greater creativity will be needed as meeting the Pacific half way on climate change is a prerequisite for success.