One of my banks invited me to a customer lunch a few weeks back so that it could announce its commitment to the new Banking Code of Conduct.

Here was a chance for it to say sorry to its customers and promise that things would be better in the future.

So I accepted the invitation, and the chief executive did indeed say sorry. A representative from the Australian Banking Association briefly introduced the code. No questions or comments were sought from attendees, and good food was served.

However, before attending the lunch I did some homework on the new code.

If it was an article sent to a journal for review it would have been sent back to the authors for another revise and resubmit.

The latest version of the code is a revision of the 2013 version – which obviously did not work. This one is better: it is a set of enforceable standards that customers and small businesses and their guarantors can expect from Australian banks. It has been approved by the Australian Securities and Investments Commission. 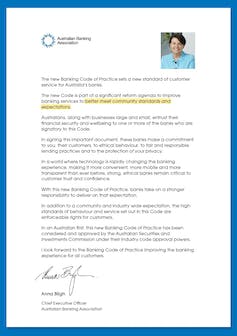 Banking Code of Practice, ABA 2019 But it has has some gaping holes in it. Let me explain. It is preceded by an introduction written by Anna Bligh, the head of the Australian Banking Association, a bank-funded lobby group. It says the new code is designed to “better meet community standards and expectations”. But what are those community expectations? Nowhere in the code does it say. So I asked my dining companions, invited to the lunch by the bank, what they expected of banks. It quickly became apparent there are two types of expectations. One deals with the process of banking. In essence, this means the banks will do the paperwork correctly. The new code is all about process, roughly 40 pages and 200 paragraphs. From the perspective of the banks trying to regain trust, this is helpful. If the banks abide by the new code they can expect co-called “cognitive” trust to be restored. Cognitive trust is the belief that procedures are being followed. …including outcomes The second type deals with outcomes. As I noted, outcomes are missing from the new code. The customers at my table wanted four: good service, especially when there is a problem convenient banking, via ATMs, branches, internet applications, etc. affordable banking which means reasonable fees and charges passing on Reserve Bank interest rate changes Luckily we had two bank employees at our table to ask how the bank was providing such outcomes. The conversation did not go well. For example, one complaint was that when you call the bank for help you have to go through an extended menu of options before you get to talk to someone – often in Manila. Wouldn’t it be possible to have a call centre in Australia and speak directly to a local? No. Why? Because it is cheaper to have the call centres in Asia, and the other banks do it. Read more: The new banking code looks impressive, but what will it achieve? Similar profit-before-customer-service explanations were provided for questions in categories 2, 3 and 4. Our hosts were becoming just a little bit defensive by the time lunch concluded. What they were hearing was that the new code was failing to prod the banks into restoring emotional trust. This is the sort of trust that provides the glue for customer loyalty and word-of-mouth or word-of-mouse recommendation. Liking, or as some advertising agencies like to suggest, loving a brand is what makes it successful. It’s a standard consultants’ document The people who drafted the new code appear to have followed standard consulting advice. This says that you can guarantee a process but never an outcome. Outcomes are often determined by factors outside your control. So the safe practice is to draft a code that focuses on process. It might help to restore cognitive trust but it will do little to rekindle emotional trust. It means that even though the Australian Banking Association and the banks are proud of their new code, it will do only do half the job. It’s an opportunity lost. What do the bankers think? Heading out from lunch I met the bank chief executive. Five minutes later we both agreed that the new code was as much public relations as substance. However, his bank was way ahead of the code in its journey to restore trust. He and his team have begun significant internal culture change. Never again would bad apples and bad process contaminate good banking practice. I wonder if the team members at our table will provide our feedback about the code and the bank’s culture of putting profit before customers to their next team meeting? Our emotional trust stayed exactly where it was after what was a very pleasant meal, even though we know who will end up paying for it. Read more: Banking Royal Commission: no commissions, no exemptions, no fees without permission. Hayne gets the government to do a U-turn