The Hong Kong protest movement is not deescalating – nor will it. Having battled for 12 weeks, this multi-million-person movement has lasted much longer than the unsuccessful 79-day Umbrella protests in 2014.

This is because protesters believe this is their last chance to protect the “one country, two systems” model that came into effect after Hong Kong’s 1997 handover to China and also expand the scope of the democracy in the city.

Yet, despite the enormous, peaceful marches, along with the more militant protesters who have shut down the airport and engaged in repeated battles with police, Hong Kong Chief Executive Carrie Lam has remained unmoved.

This dynamic is hard for Western governments to understand. If these protests were happening in a democratic society, the government would likely seek to enter into concession bargaining with the protesters, knowing that compromise and negotiation are core strategies for deescalating tensions.

Read more: Trust Me, I’m An Expert: Why the Hong Kong protesters feel they have nothing to lose

This has not happened in Hong Kong. At her regular Friday press conferences, Lam neither acknowledges nor engages in any discussions about the protesters’ five key demands, including the formal withdrawal of the extradition bill that initially sparked the protests back in June.

It raises two questions - why isn’t this movement slowing down, and what will Lam, or Beijing, eventually do in response?

Carrie Lam evading questions about her inability to formally withdraw the extradition bill.

The Hong Kong protesters practice a strategy called “being water”. The phrase was first used by martial arts star Bruce Lee, and it means building a movement that is fluid.

As one protest leader described it to me in Hong Kong,

we flow to where the needs or energy lies, and leave where it’s not working.

This is the approach behind the apparently spontaneous protests all over the city - from the airport, to the New Territories, to Hong Kong Island. But they aren’t spontaneous at all - the ideas for the demonstrations are deliberated on LIHKG, a Reddit-style website where anyone can post an idea and have it debated and voted up or down by other protesters.

The movement has great solidarity across it, despite the presence of sometimes militant tactics. This, too, is hard to understand in the West, as most assume the radically different tactics by the largely older, more peaceful weekend protesters and the younger, more militant faction is likely to lead to a split.

Read more: The Hong Kong protesters have turned militant and more strategic – and this unnerves Beijing

What many don’t see is that the peaceful wing and the more militant youthful wing deeply respect each other’s roles. During the 1.7 million-person march on August 18, for instance, some suggested there should be an occupation of police headquarters. Yet, this idea was voted down on LIHKG because most said it would undermine the peaceful role the rally was designed to serve.

There are some tensions, of course. During Sunday’s clashes with police, there was some criticism after a photo emerged of a protester brandishing a BB gun. But overall, the movement has largely stuck together.

This is exactly what the protesters didn’t do during Umbrella. When a more militant arm emerged during those protests, it was criticised by the older generation. The split meant that the movement was incapable of making decisions, including negotiating an end to the occupation. The movement became isolated, leaving it vulnerable to attack. It lost support from the Hong Kong people.

The other cohesive element this time around is the recognition that the “one country, two systems” model that ensures certain rights and freedoms for Hong Kong residents until 2047 is increasingly under threat.

While previous generations of Hong Kong democratic leaders drew their energy from collective anger over the 1989 Tiananmen Square massacre, the current generation fears living as adults within the People’s Republic of China.

The 2047 timeline has been brought forward to 2019, and the fight for a democratic Hong Kong is now.

So what does Carrie Lam – and her backers in Beijing – do in response to that?

Last week, Lam instigated a so-called “listening process”. But protesters accused her of being disingenuous. Her first act involved listening to her allies and members of her cabinet. Even so, several pro-Beijing supporters suggested she withdraw the extradition bill and consider an inquiry into accusations of police brutality.

But Lam hasn’t shifted. And this begs the question - what autonomy does she have? If Hong Kong has its own “separate system”, then negotiations with the protesters on questions related to that system should be seen as an important political step.

Many protesters fear the lack of momentum on negotiations reflects the extent to which Hong Kong’s system is under threat. And this, in turn, affirms the need to continue protesting.

Instead of prioritising real dialogue, the government’s response has been an escalation of force. On Sunday, we saw water cannons fired into crowds for the first time and live ammunition shot into the air. Beijing has also amassed large convoys of military vehicles at the border in recent weeks. 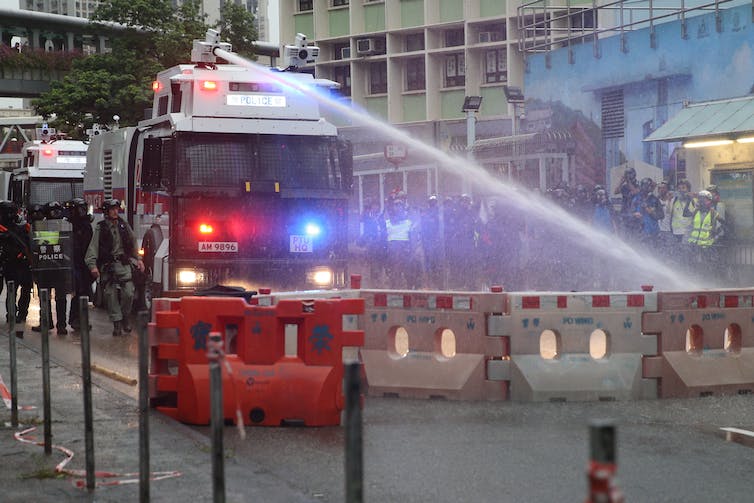 The government’s escalating response to the protesters: fight water with water. Jerome Favre/EPA

Is another Tiananmen in the offing?

The internet is wild with rumours about “another Tiananmen”. And, in many ways, that is the purpose of the tanks on the border. Their presence provokes great fear. It raises the stakes for any protester.

This kind of fear also circulated during the Umbrella movement. I interviewed many protest leaders back then who said they went to the streets prepared to die for Hong Kong.

That said, a military incursion in a place as large as Hong Kong would be gravely difficult. Making it even more challenging is the fact it is hard to shoot water, which is akin to taking aim at a guerrilla army instead of people standing in a square.

Read more: Beijing is moving to stamp out the Hong Kong protests – but it may have already lost the city for good

And, it’s important to remember that even the military crackdown on the Tiananmen protesters was a process. First, the government implemented curfews in late April in 1989, followed by martial law in late May. The tanks were finally deployed on June 4.

A more likely response from the government in Hong Kong is an intensification of the police response to the protesters. There will be more water cannons, more rubber bullets. Chinese military and police might also be deployed to support the Hong Kong police on the ground. It’s a kind of military engagement, but done through the Hong Kong system.

There will also likely be more attacks on the protesters’ digital tools. Telegram, Whatsapp and LIHKG may be targeted with cyber attacks or temporarily shut down - turning the water off at its source.

The government will also ramp up its use of face recognition tools to identify the protesters to use in future prosecutions. The protesters are aware of this possibility and have begun removing “smart lamp posts” and their cameras at the site of recent protests.

No one knows what will happen in Hong Kong - not the government, not Beijing, not the protesters. The fluid dynamic of the protests is unprecedented.

The protesters are young, but highly experienced after having participated in the 2014 Umbrella movement. They are also motivated to continue fighting for what they believe is the future of their city.

Lam has deeply underestimated their momentum and the enormous levels of support they have across all segments of society. The protests will not stop until a pathway for a stronger democracy is on the table. Western governments can either help make that pathway happen through diplomatic interventions, or watch as the movement faces increasingly violent repression.