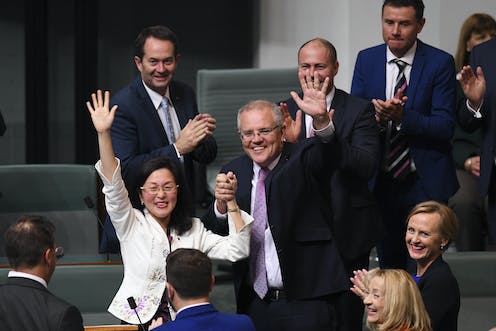 Since then, ethnic Chinese people supported by Beijing have begun joining political parties and running for office in Canada, New Zealand, Britain and Australia. The strategy is most advanced in Canada, but it’s been building in Australia, too.

The baleful consequence of this new situation is that Chinese communities, already seriously under-represented in parliaments, now find themselves represented by people whose loyalties are in doubt. The CCP has poisoned the well.

It’s with these developments in mind that questions have been raised about the alleged links of the newly elected Liberal member for Chisholm, Gladys Liu, to organisations associated with the Chinese Communist Party.

Investigations by the ABC and Nine newspapers have revealed that Liu has been closely connected with a number of organisations in Australia and China that are directed by or closely linked to the CCP’s powerful United Front Work Department.

One of the department’s tasks is to co-opt and guide ethnic Chinese people living abroad so they act in the interests of the Communist Party. Its size and importance have increased sharply under President Xi Jinping, who has described United Front as one of the party’s “magic weapons”.

Read more: Inside China's vast influence network – how it works, and the extent of its reach in Australia

One prominent United Front organisation is the Guangdong provincial branch of the China Overseas Exchange Association, an overseas propaganda and influence outfit headed by high-ranking party officials. Documents show that Liu has been a council member of this organisation.

She has also confirmed she has been an honorary president of the United Chinese Commerce Association of Australia.

There is strong evidence that this body is part of the CCP’s United Front network for exerting political influence in Australia. For example, the current president, Huang Zhuang, has close links with party organisations in China. And its permanent honorary president, Lo Man-tuen, is a member of the Chinese People’s Political Consultative Conference, a top-level patriotic advisory body.

The Jiangmen association was one of the organisations that backed a protest on the streets of Melbourne in 2016 against a ruling of the Permanent Court of Arbitration in The Hague, rejecting China’s claims to much of the South China Sea.

Liu said she “cannot recall” being a member of the China Overseas Exchange Association. And she has previously said she is unaware of any Communist Party links with the other organisations that she participates in and that she has only joined them to promote trade and community activities.

Liu has been an energetic supporter of the Liberal cause. She has run for office in Victoria a number of times and was once employed as an adviser to Liberal leader Ted Baillieu.

But she is perhaps most admired in the Liberal Party for her fundraising ability. Her claim to be “one of the most effective fundraisers in the Victorian division” of the party is almost certainly true.

However, her fundraising came under a cloud last month when it was reported by the Herald Sun that the Liberal Party had been forced to return A$300,000 to dodgy donors that she had brought to an event in 2015. (Liu has denied that any funds were returned to donors).

Then-Prime Minister Malcolm Turnbull refused to have dinner with the donors because he had been warned off by our intelligence services due to “security concerns”. Foreign Minister Julie Bishop and opposition leader Matthew Guy did likewise.

Why Liu must answer to parliament

Even though Liu has denied having links with the Chinese Communist Party, there are now serious questions swirling around her and legitimate doubts about whether she owes “allegiance, obedience, or adherence to a foreign power”.

Those words are taken from section 44 of the Constitution. While many federal politicians have been disqualified from parliament because they have turned out to be citizens of another country, the question of allegiance to a foreign power is a far weightier reason for disqualification.

Parliament must now grapple with Liu’s case. If there is enough evidence to indicate she may owe allegiance to a foreign power, then parliament ought to refer her to the High Court, where the claims can be tested.

Otherwise, a dark cloud will hang over her as long as she sits in the House of Representatives. And a dark cloud will overshadow the Liberal Party, because more and more people will want to know why it stuck with Liu when it knew that intelligence agencies had concerns strong enough to deter the prime minister from meeting with her donors.