Self-described as a “one-hit wonder”, Hogan’s well-loved persona is attributed to his embodiment of the ordinary, Aussie bloke.

But just who is this mythic Australian bloke?

He is white, straight, able-bodied, and good for a laugh. He is practical and good in a crisis, but generally laid back. He rejects individualism in favour of loyalty to his mates. He is a larrikin and a hater of authority.

He is just your ordinary, average guy.

Hogan’s emergence as an international Australian icon is largely in part due to his embodiment of this idealised Aussie bloke.

The outback ocker was embedded in white Australian culture through the late 1800s and early 1900s.

Poets such as Henry Lawson and Banjo Patterson, and literary magazines such as The Bulletin, romanticised ocker men and the hardships of bush life. White men who could survive in the rough Australian climate were valued for their mateship, perseverance, and push back against authority. 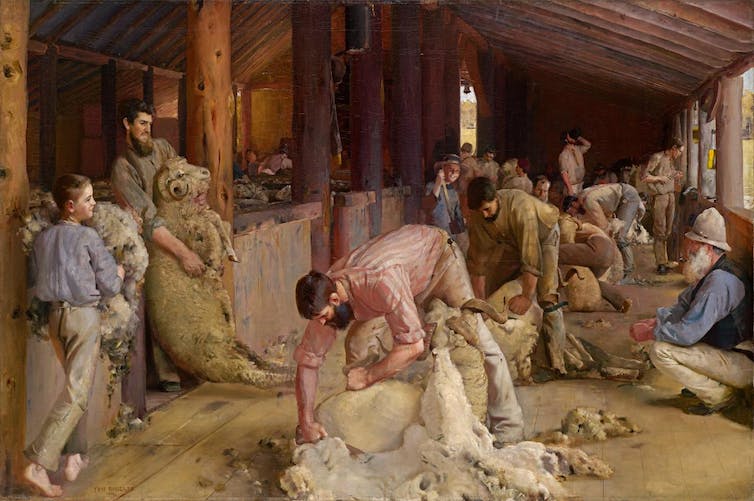 Shearing the Rams is a classic capturing of the rough Aussie bloke. NGV Collection

The significant losses of ANZACs during the first world war marked a shift from focusing on the bush as a site of masculinity, to life on the urban beach. Australia was desperate for heroes, and the image of a strong, white, and healthy male was nurtured. 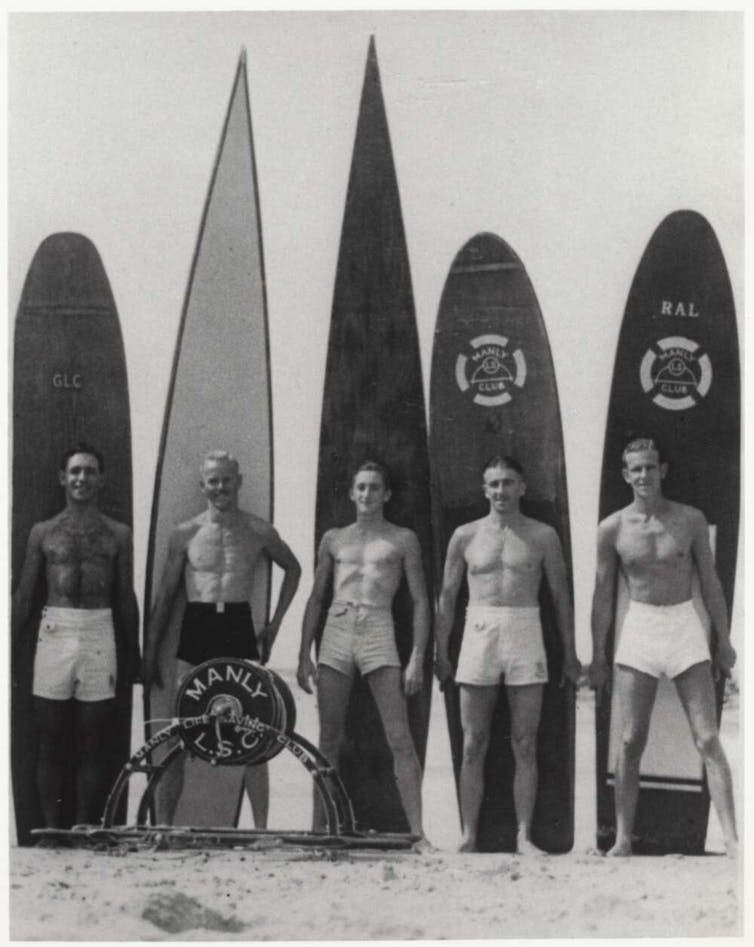 Post WWI, the image of the Australian bloke moved from the bush to the beach. Ray Leighton/Trove

In the 60s and 70s, there was a cultural push in Australian society to instate a white, collective, homogeneous Australian identity occurring alongside the abolition of the White Australia policy. There was a push towards Australian national pride, encouraging consumption of local goods and entertainment, and the inclusion of white Australian history in the school curriculum.

Simultaneously, Aboriginal and Torres Strait Islander people fought (and continue to fight) for increased recognition for rights, histories, and social justice – standing in contrast to colonial ideas of Australian identity and heritage.

Through the 70s and 80s, films such as The Man From Snowy River, Gallipoli, and Burke & Wills, and television shows such as Ask the Leyland Brothers and The Bush Tucker Man, gave a revival to the image of the white ocker. As Australian life moved further away from idealised bloke, this man was being revived on screen.

It was in this era we met Crocodile Dundee.

A lasting image of Australian culture

In his early career, Hogan had recurring appearances on A Current Affair, and became a household name with The Paul Hogan Show.

But the prevailing image of Hogan is as Mick Dundee, a character which also helped form a global reputation of Australia as a place that is easy-going and unconcerned with material lifestyles – despite Australia being quite the contrary, thanks to post-war prosperity.

Dundee has spurred parodies and a cameo on The Simpsons. Last year, Tourism Australia created a trailer for a fake new instalment of the Crocodile Dundee films to promote Australia tourism.

The success of this advertisement is attributed to the public push for such a film to be produced. But at the same time this posited return of Hogan was celebrated, it was clear that this image of the Aussie bloke has also lost its shine.

Characters like Crocodile Dundee are now critiqued for being sexist, racist, and homophobic, and performing masculinity is regarded as a major form of oppression for men.

The conversation has shifted. The stoicism of the Aussie Bloke can lead to poor mental health, as men are forced to embody a narrow definition of Australian masculinity. There needs to be a change in how men behave and enact masculinity in Australian culture.

Contemporary critiques of the bloke

Hogan’s performance of masculinity is one that is easy-going, ordinary, and down-to-earth. It is relatable because it is not extraordinary.

But after the height of Crocodile Dundee, Hogan experienced major downfalls. Divorce and tax evasion scandals went against the idealised image of the Aussie bloke; not helped by Australia’s Tall Poppy Syndrome.

Hogan’s representation of an everyday, ordinary bloke had been damaged by his accumulation of wealth and break down of his nuclear family structure. The performative masculinity of the Australian bloke is narrow and exacting, forever threatened. 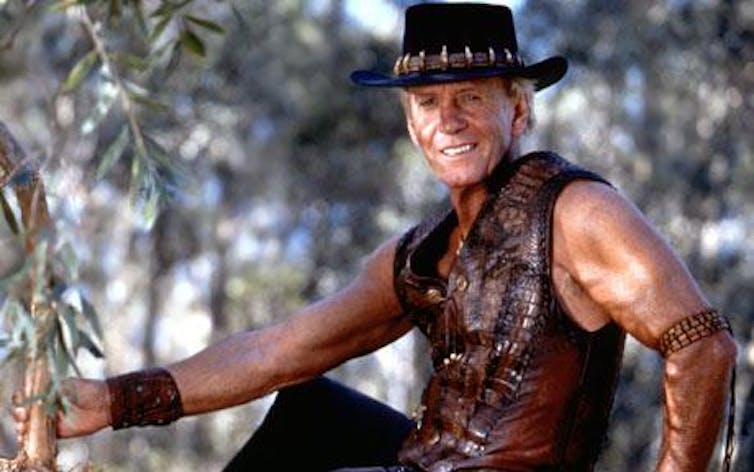 The myth of the white Australian bloke can be damaging – but perhaps there is a way forward. Paramount

There is much damaging about this legend of the ordinary, Aussie bloke: its exclusion of those who don’t fit the white, able-bodied, hetero norm; its impact on men’s mental health; its ties with colonialism and the subjugation of women and Aboriginal and Torres Strait Islander peoples and cultures.

But in watching the recent Australian Story, there is something, too, we can all take to heart from the value of ordinariness in a world where we are increasingly asked to be extraordinary.

Maybe this is the new Australian myth we should all embrace.