This is part of a new series looking at the national security challenges facing Australia, how our leaders are responding to them through legislation and how these measures are impacting society.

In August, the intelligence officer known as Witness K indicated he would plead guilty to a conspiracy charge under section 39 of the Intelligence Services Act. That section prohibits the disclosure of information acquired or prepared by the Australian Secret Intelligence Service (ASIS).

His lawyer, Bernard Collaery, will contest the same charge in the ACT Supreme Court.

Concerns have been raised about the use of the National Security Information Act (NSIA) in the Collaery trial. Anthony Whealy, a former judge who presided over several of Australia’s recent terrorism trials, said

This could be one of the most secretive trials in Australian history.

Both cases will be back in court this month. A hearing is also scheduled to consider how national security information will be dealt with in the Collaery trial.

There has been significant media discussion around the ASIS bugging that Witness K and Bernard Collaery exposed, but less about the NSIA.

So what is the National Security Information Act? Why was it introduced and how could it lead to secretive trials?

Having its cake and eating it, too

The purpose of the NSIA is to protect national security information while allowing it to be used in Australian courtrooms. It applies in federal court proceedings, both civil and criminal.

Before the NSIA, prosecutors faced a difficult choice. They could prosecute someone for terrorism, national security or secrecy offences and risk having sensitive information disclosed publicly, or they could keep the information secret and possibly have the prosecution fail.

The act was introduced in 2004 as part of Australia’s vast suite of counter-terrorism laws, designed specifically to help prosecutors convict people for terrorism offences.

Now, the government can have its cake and eat it too: it no longer needs to choose between protecting sensitive information and prosecuting someone for disclosing it.

What does the NSIA do?

The NSIA creates special procedures by which national security information can be protected while still being used as evidence.

There are two circumstances in which the NSIA procedures can be triggered. The first is when the parties know in advance they are likely to reveal national security information during the trial. The parties must notify the attorney-general of this, or face two years in prison.

The second set of circumstances relates to when a witness is being questioned on the stand and an answer has the potential to reveal national security information. If a lawyer or the defendant knows this could happen, he or she must stop the witness from answering and notify the court, or the same penalty applies.

Read more: Why an Australian charter of rights is a matter of national urgency

In either of these circumstances, the attorney-general can issue a non-disclosure certificate that prohibits the information from being revealed or allows it to be revealed in summary or redacted form. The court then holds a closed hearing in which the judge will determine whether and how the information may be used.

In a closed hearing, not only are journalists and members of the public barred from attending, but also the jury. The judge may even exclude the defendant, the defendant’s lawyer or a court official if revealing the information to them would be likely to compromise national security. 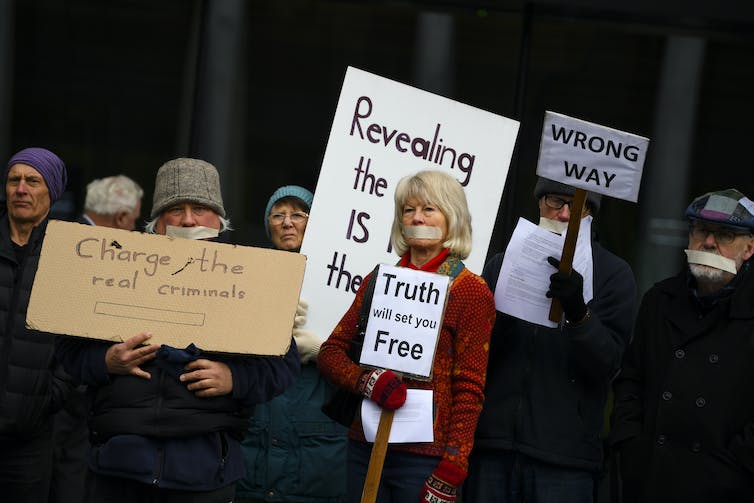 That the legislation permits closed hearings is not necessarily the main issue, though this certainly undermines the principles of open justice. However, closed hearings are an option in other sensitive cases, such as those involving child victims of sexual assault.

The main problem with the NSIA is that it creates a situation in which national security information can be used in a courtroom without the defendant, jury, media or general public knowing the details of that information.

Producing evidence in summary or redacted form means that the gist of the information is provided, but key details are kept secret. In fact, it is not even clear under Australian law that something approximating a gist needs to be given.

This undermines the defendant’s ability to argue their innocence. A core aspect of procedural fairness and the right to a fair trial is that defendants must know the case against them. This allows their lawyers to contest the veracity of the evidence through cross-examination.

Without knowing when or how the prosecution’s evidence was collected, or even the precise claims the evidence is making, lawyers cannot adequately defend their clients. They are fighting with one hand tied behind their backs.

Moreover, in deciding how potentially sensitive information can be used in court, judges must give greater weight to national security than the defendant’s right to receive a fair hearing.

In other words, the NSIA does not require a judge to balance national security and a fair trial equally. More weight must be given to the former under the law.

It may be that judges can still strike an appropriate balance so defendants receive a fair hearing in cases like these. But if a contest between national security and a fair trial needs to be decided, it is clear which one wins.

Using the NSIA in the Collaery trial is also significant because the accused is a whistleblowing lawyer and not someone accused of terrorism.

After the recent police raids on the ABC headquarters, the home of a News Corp journalist and the home of an Australian Signals Directorate officer, the Australian media will be watching this trial closely.

It is likely, given the sensitive nature of the ASIS bugging scandal, that information will be withheld from Collaery’s defence team for national security reasons. This is a significant test case for whether whistleblowers can receive a fair trial in the current climate of government secrecy.