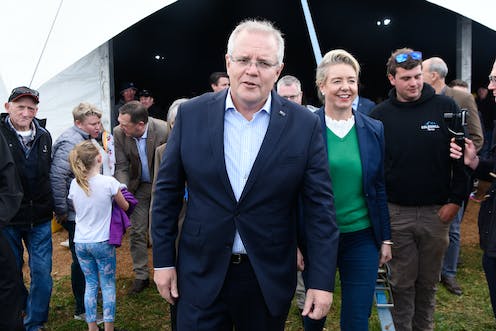 Scott Morrison’s Lowy lecture on foreign policy, titled “In our interest” and delivered on Thursday, was peevish in its tone and lacked nuance in its content.

While Morrison canvassed the positive side of globalism, the take-out was his forthright criticisms of what he sees as its negatives.

He warned against globalism “that coercively seeks to impose a mandate from an often ill-defined borderless global community. And worse still, an unaccountable internationalist bureaucracy”.

He went on, “We can never answer to a higher authority than the people of Australia”.

Not that he even attended the United Nations leaders summit on climate. His office explained his absence by the fact Australia wouldn’t get a speaking spot, which only went to countries with new initiatives to announce. So Morrison devoted his address to the UN General Assembly to defending his government’s climate policy.

The prime minister is clearly frustrated at the pot shots that are fired at Australia over climate change, although they come from well beyond the UN (remember the Pacific Islands Forum). Successive conservative governments have also been riled by the long running criticism from UN bodies over Australia’s treatment of refugees.

When on Friday he was pressed for an example of where an unaccountable international bureaucracy had sought to coerce Australia, Morrison started talking about commentary on border protection, while stressing Australia determines its own policy.

In general, Morrison believes that activists on various issues are too entrenched and powerful in UN institutions.

His angst about internationalism also stretches to the European Union and its failure to facilitate Brexit.

He deploys stark lines of defiance.

On climate, he told the general assembly Australia was “doing our bit” and “we reject any suggestion to the contrary”.

On Australia’s international engagement, he adapted a Howardism to say in the Lowy lecture: “We will decide our interests and the circumstances in which we seek to pursue them”.

With only a year’s experience as a prime minister on the international stage, Morrison is becoming assertive. He has told the foreign affairs department “to come back to me with a comprehensive audit of global institutions and rule-making processes where we have the greatest stake”.

He wants Australia to have a bigger role in setting “the standards that will shape our global economy”. The speech didn’t spell this out fully, but it includes industry standards.

Morrison appears to be tracking to the right. He always has an eye to the immediate politics and his attack on “negative globalism” will play well with the conservatives in the ranks of the Liberal party and the more strident commentariat.

But there is a rather startling lack of thought in the stance he adopted in the Lowy address.

Yes, the government is sensitive to UN pressures over climate and asylum policy.

But we are signed up – of our own choosing - to a range of international institutions, from the UN to the World Trade Organisation, because they are part of a rules based international order that serves our long term interests.

The government might be narky about the UN on some issues, but it was only a few years ago that it was highlighting Australia’s role on the Security Council after the MH17 downing.

And it’s one thing saying institutions like the WTO need to reform – which is correct - and another having a general spray about international bureaucracy.

Australia is urging both the US and China to a greater commitment to the rules based system. If it wants its arguments to be taken seriously, it’s best to talk up global co-operation, not talk it down.

It was unfortunate that Morrison’s words had an echo of Donald Trump’s speech last week, in which he elevated patriots over globalists.

Given Trump’s rants over the past few days, one can’t help feeling Morrison was lucky he came out of the US trip as well (and as unscathed) as he did.

Now is no time to appear to be, in the words of one observer, “sitting on the conveyor belt of Trumpism”.

All in all, the text of the Lowy speech needed a good deal more subtlety, as well as having the white-out applied to the frustrations.