Protected land, including national parks, are a cornerstone of conservation. Once an area is legally protected, it is tempting to assume that it is shielded from further degradation.

However, our research, published in the journal Global Ecology and Conservation, has found Australia’s national parks are under serious threat of overgrazing. Significantly, native kangaroos are major contributors to the problem.

In some places we looked at, the effect of overgrazing in protected areas was just as pronounced as on private land with no legal protection at all.

In the public debate over culling and otherwise managing kangaroo populations, attention is typically divided between their economic impact on people versus welfare concerns. But there’s a third unwilling participant in this dilemma: the thousands of other native species affected when native grazer populations grow out of control. 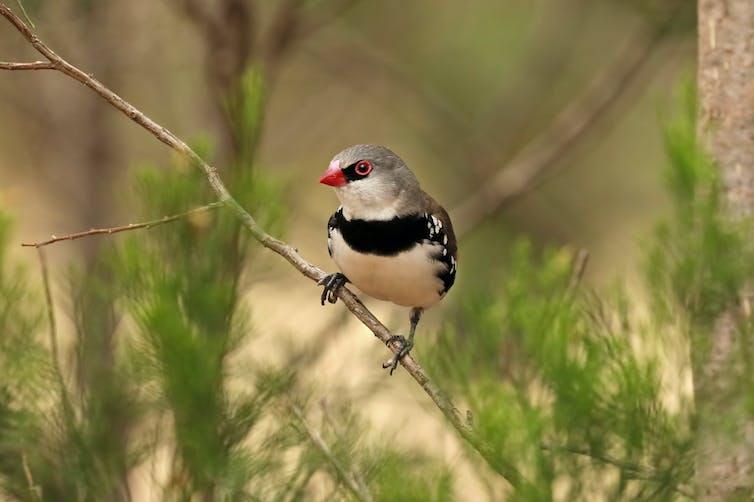 Native birds like the diamond firetail are threatened when abundant grazing animals eat the plants the birds depend on. Tom Hunt

National parks and other protected areas can be safeguarded in a variety of legal ways. Activities such as grazing of domestic stock, building, cropping and some recreational activities (hunting, fishing, dogs) are usually restricted in protected areas. However, previous research has found protected areas continue to face intense pressure from agriculture, urbanisation, mining, road construction, and climate change.

Less conspicuously, the loss of predators from many Australian ecosystems has let herbivore populations grow wildly. Overgrazing, or grazing that leads to changes in habitat, is now a key threat to biodiversity.

Overgrazing by herbivores affects native species such as the diamond firetail, which is declining in southeastern Australia due to loss of habitat and the replacement of native grasses with exotic species after overgrazing and fire. Overgrazing has also been shown to reduce the abundance and diversity of ground-dwelling reptiles.

In the face of a global extinction crisis, we need good evidence that national parks and reserves are serving their purpose.

Read more: The alpine grazing debate was never about science

To determine whether protected areas are being overgrazed, we assessed grazing impact on native vegetation at 1,192 sites across the entire agricultural region of South Australia. We looked at more than 600 plant species in woodlands, forests, shrublands, and grasslands.

The data were collected by monitoring programs, some of which included citizen scientists, aimed at tracking change in the condition of native vegetation. 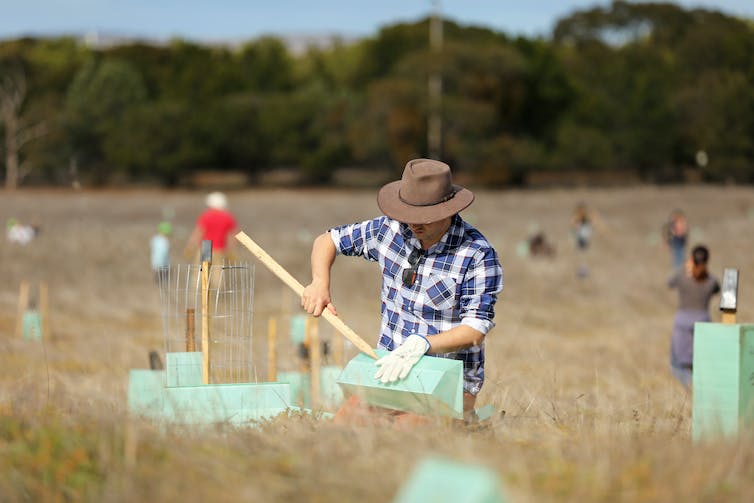 Researchers looked at hundreds of sites across Southern Australia to check how grazing animals were affecting the environment. Tom Hunt

We found that grazing pressure was already high on unprotected land when we began monitoring around 2005, and grazing impact has grown since then. On protected land, three things are happening as a consequence of inadequate management of grazing by native and introduced animals:

The grass is not greener

It’s well accepted that introduced species such as deer, goats, horses, camels and rabbits badly affect Australia’s native vegetation. There are a variety of control measures to keep their populations in check, including culls and strong incentives for control on farmland. Control of feral animals is normally less contentious than control of endemic species like kangaroos, because we feel a custodial responsibility for native species.

But the numbers of native kangaroos and wallabies has also increased dramatically since 2011 as populations across Australia responded to an increase in feed at the end of the Millennium drought and reduced culling in settled areas due to changes in regulation and growing opposition to culls on animal welfare grounds.

Read more: Plants are going extinct up to 350 times faster than the historical norm

Managing kangaroo populations, on the other hand, is a polarising issue. Arguments about culling kangaroos can be bitter and personal, and create perceptions of an urban-rural divide.

However, a few species – even if they are native – should not be allowed to compromise the existence of other native plants and animals, especially not where we have dedicated the land to holistic protection of biodiversity.

Extinction rates in Australia are extremely high, especially among plants. Research has also found conservation funding is disproportionately aimed at individual species rather than crucial ecosystems. We must address our reluctance to manage threats to biodiversity at the scale on which they operate.

Protected areas must be managed to meet clear biodiversity targets and control overgrazing, including from native species.

Welfare concerns for conspicuous native species need to be weighed against the concern for the many other less obvious native plant and animal species. If our national parks and reserves are not managed properly, they will fail to meet the conservation need for which they were established.