Congestion charging should be introduced in Australia’s largest cities, as Grattan Institute’s latest report shows. Our analysis also finds that the people who commute to the Melbourne and Sydney CBDs by driving are two to three times as likely to earn six-figure salaries as other Australian workers.

One of the main concerns about charging drivers who use the busiest roads at the busiest times has been about fairness. But sensible congestion charges could be designed to avoid burdening financially vulnerable people who lack alternatives to using particular roads at busy times.

Sydney and Melbourne are big, global cities, but with growth and prosperity comes congestion. The solution from the federal, New South Wales and Victorian governments has been to throw money at huge infrastructure projects. Politicians like promising infrastructure because large benefits can be targeted at key voters, while the costs are spread across all taxpayers.

But this means many people are paying to alleviate some people’s congestion. And the relief from new infrastructure tends to be short-lived. In Australia’s fast-growing cities, extra public transport capacity at peak times gets chewed up quickly, while new freeways tend to fill with new traffic soon after opening.

This doesn’t mean governments should stop investing in infrastructure. But it does raise the question of whether spending billions of taxpayer dollars is the best or fairest way to tackle congestion.

We usually think of congestion as a force that slows us down, without thinking about how we slow everyone else around us. Congestion charging fixes this by charging a modest fee to use the busiest roads. Drivers then have to decide whether it’s worth making their trip at that time on that road.

Drivers who need to travel at peak times are always able to do so – they just need to pay a fee. Heavy users will end up paying more for using an in-demand resource. The most flexible drivers will save money by travelling later, or elsewhere, or by another mode. And this means getting out of everybody else’s way.

Charging is also fairer than the licence-plate approach of Mexico City or Beijing, where cars are banned from driving on certain days depending on their licence plate numbers. These heavy-handed restrictions ignore the fact that people’s travel needs vary from day to day. Why ban a driver on the day of a job interview?

But what about all the drivers on low incomes?

It’s fair to ask whether congestion charging will burden the most vulnerable people in society. And the answer depends on the design of the scheme.

First, the people who we should really worry about are those who: are struggling financially; frequently or urgently need to travel on charged roads or to a charged area; and lack good alternatives to driving at that time on those roads.

A sensible congestion charge would target only the busiest roads and areas – think central business districts (CBDs), major freeways and key arterial routes – and only at times of high demand such as peak hour.

So if Sydney or Melbourne were to introduce a peak-period congestion charge around their CBDs, how many vulnerable people would be affected? Hardly any.

Our research shows the drivers who would pay the charge tend to be doing just fine. It’s mostly commuters and people driving as part of their job – think tradespeople and couriers. Those travelling for work could pass the cost on to their customers – every tradie driving to the CBD would face the same charge, so no one would gain or lose a competitive advantage.

Most CBD drivers are well-off

And the CBD commuters? They tend to earn much more than the typical Australian.

Grattan Institute analysis shows most people driving to the Sydney CBD for work each day earn six-figure salaries. Their median income is nearly A$2,500 a week – about A$1,000 a week more than the typical income for full-time workers in Sydney. 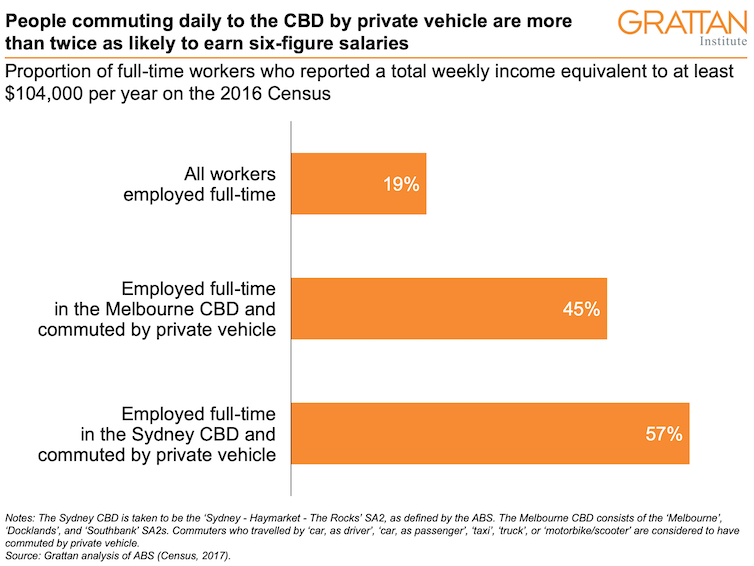 And these CBD commuters are also generally well-served by public transport. The CBD is the most accessible location in Sydney and Melbourne, with multiple train lines and bus or tram routes running through it. That’s why most people travel to the CBD by public transport. In Sydney, barely one in six full-time CBD workers actually commute by private vehicle. In Melbourne, it’s only a quarter. But these workers typically earn a lot more than the people on CBD-bound buses, trams and trains. 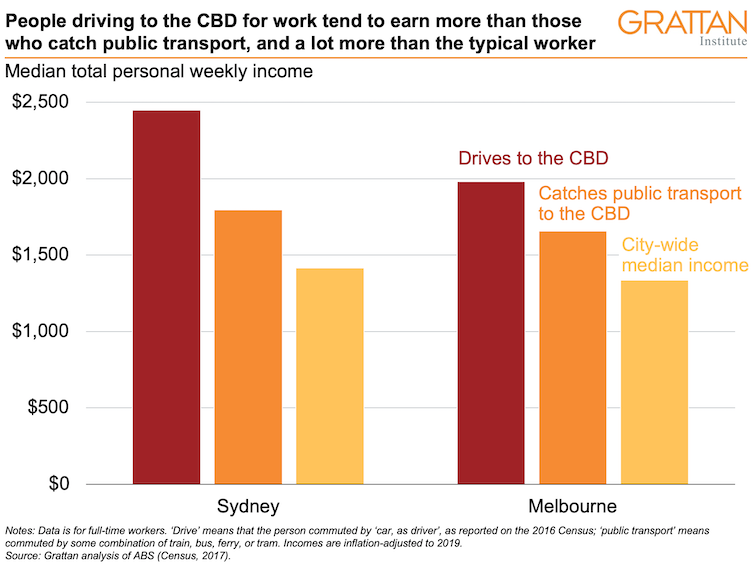 Grattan Institute, Author provided Perhaps surprisingly, drivers to the CBD are more likely to come from inner, richer parts of the city – think Mosman and Double Bay, not Penrith or Parramatta. It’s the same in Melbourne: more people drive from Kew and Richmond than Broadmeadows or Dandenong. Even those driving in from lower-income areas typically earn more than most of their neighbours. This means the number of genuinely disadvantaged people who would be burdened by a congestion charge is small. As for one-off trips to the CBD – maybe for a specialist appointment – these are by definition infrequent and can often be rescheduled to the middle of the day. State governments should consider discounts for low-income people with impaired mobility. However, wide-ranging exemptions would badly undermine the effectiveness of the congestion charge – as happened in London. 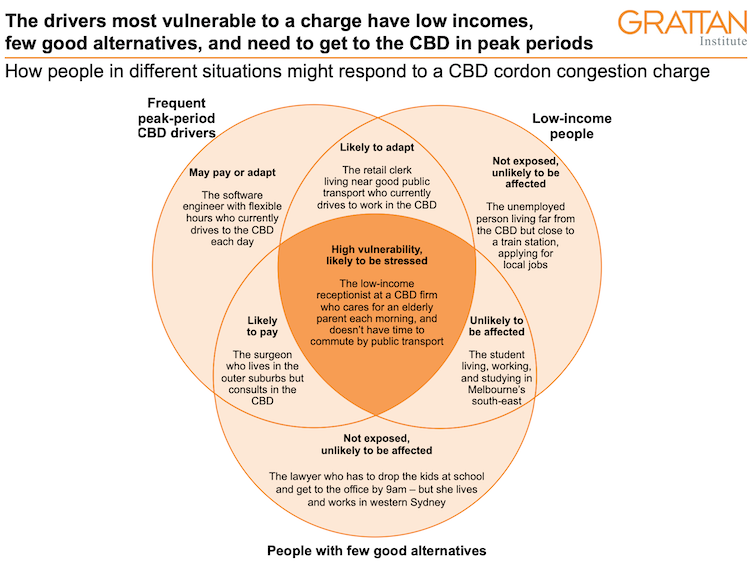 Grattan Institute, Author provided Congestion charging is a smarter way to improve Australia’s largest cities and fears that it would be unfair are overblown. It should be the centrepiece of a mixed strategy to tackle congestion. The NSW and Victorian governments should introduce cordon charging around the CBDs of their capitals within the next five years. Read more: Flexible working, the neglected congestion-busting solution for our cities