It seems appropriate that a painting titled Feng Shui dominates the new exhibition of Guan Wei’s work at Sydney’s Museum of Contemporary Art (MCA). He is the master of working and living between two cultures: the China of his birth and Australia, his home for most of the last three decades.

A rhythmically moving ocean where creatures great and small leisurely swim in tranquillity between continents: this is Guan’s vision of a world in harmony.

Clouds of good fortune blow to encourage the swimmers on their journeys; a fleet of sailing ships join their voyage. Taking up two adjoining walls of the gallery, the work takes on a three-dimensional appearance as swimmers and fish advance towards the viewer.

Guan has a long fascination with both antique maps and mythical creatures. At the core of this work is a giant map: patterns in shades of blue echo isobars and weather maps. The grid of the 120 individually painted panels appear to define latitude and longitude. 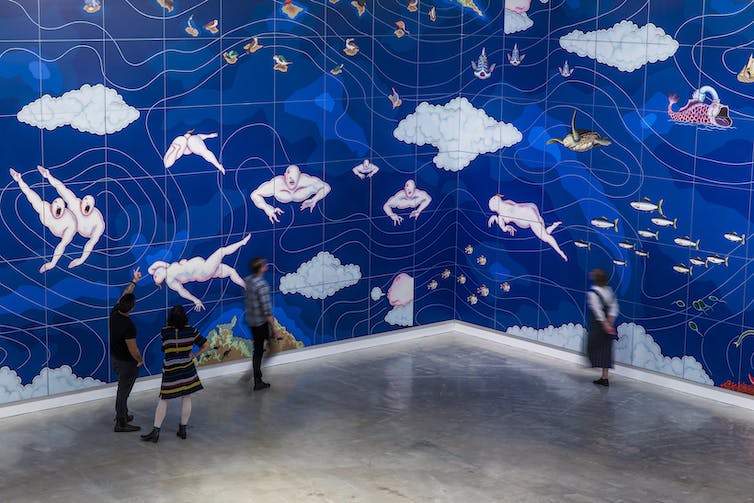 Taking up two adjoining walls, the figures seem to advance towards the viewer. Anna Kucera/MCA

Feng shui is central to the Taoist belief of balance and harmony of nature. The words translate literally into “wind” (feng) and “water” (shui): the painting becomes both an illustration of its underlying concept, and a visual pun.

Read more: Our oceans are out of balance – can we learn some tips from feng shui?

From China to Australia

Guan is from that remarkable generation of Chinese artists who, in the 1980s, began to exhibit in private homes because the work they made was not acceptable to the state. In this scene, Guan befriended a young Nicholas Jose, who would later become Australia’s cultural counsellor in Beijing.

In 1988, an exhibition of Australian art at the embassy in Beijing led to invitations from touring curators for Chinese artists to visit Australia. At the invitation of Geoff Parr, the director of the Tasmanian School of Art, Guan spent the early months of 1989 as artists-in-residence in Hobart.

Guan returned to China before the climax of the events at Tiananmen Square, but through the support of Parr and the Australian arts community, several Chinese artists were able to emigrate to Australia.

Australia in the 1990s was especially open to contemporary Chinese artists. The MCA exhibited Mao Goes Pop shortly after opening; in 1993, the Queensland Art Gallery started its ground-breaking series of Asia Pacific Triennials.

Guan, with his wife and daughter, settled first in a small apartment in Enmore in inner Sydney, before relocating to a large house in Glenmore Park in the western suburbs. It was here, in the cavernous space of the Casula Powerhouse Arts Centre, he painted Feng Shui.

In 1992, the MCA became the first public gallery to collect his work. The 48 postcard-size paintings, Two Finger Exercises (1989), were painted in Beijing, and in the current exhibition they are framed by a mural of an angel, a demon, and red flags – a reference to the conflict at the time of their making. 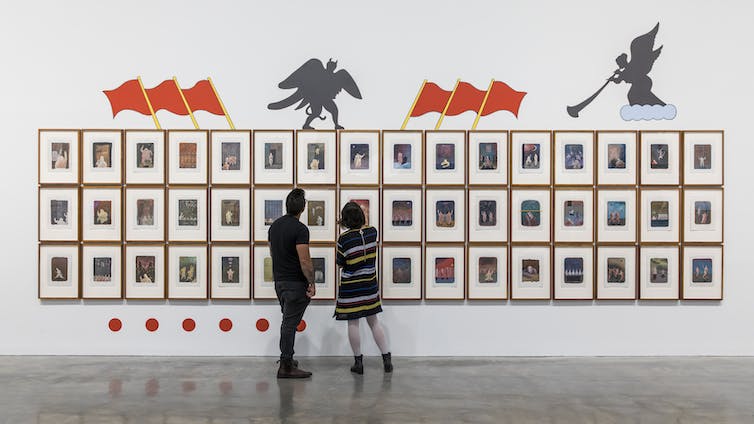 Two Finger Exercises (1989) was the first of Guan’s work collected by a public gallery. Anna Kucera/MCA

The blob-like figures in various poses and relationships all hold up two fingers. Some appear defiant, others hectoring; one is upside down. The two-fingered sign was popular with the student radicals as they stared down the might of the bureaucracy in the occupation of Tiananmen Square.

The two fingered symbol can mean a “V for Victory” and also a defiant “up yours” gesture to authority. There is also another, specifically Chinese meaning. Ancient masters of Qigong, the meditative movement now popular with fitness classes, were supposed to be able to concentrate their Qi (life-force energy) with such strength they could balance on two fingers. In this, Guan’s paintings are a reminder of strength and endurance. 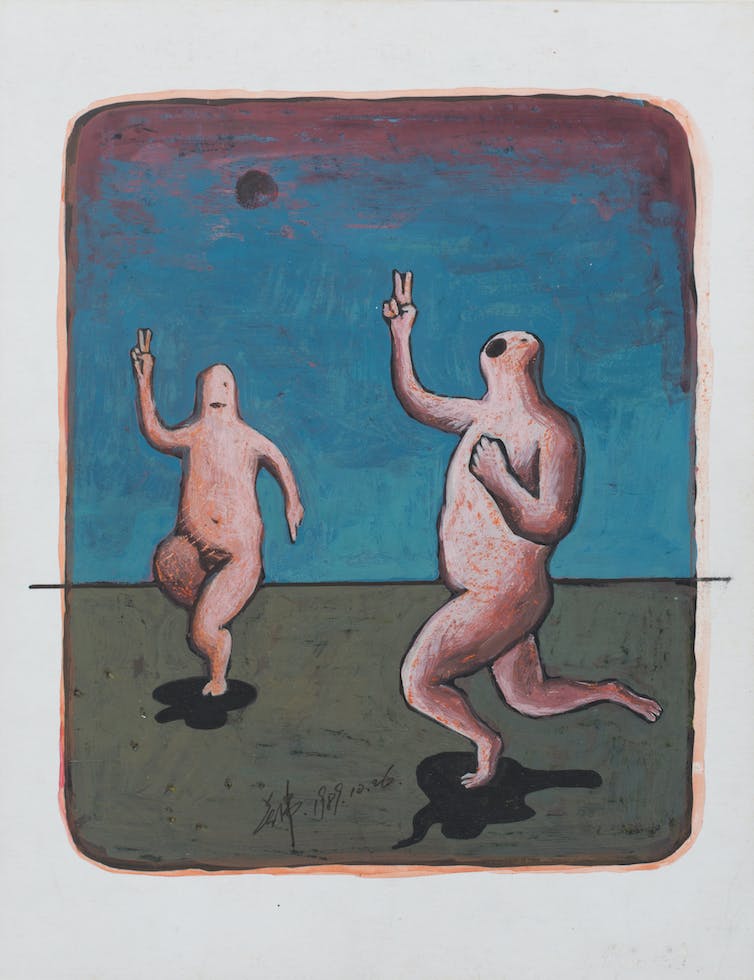 The 48 postcard-size paintings are ‘a reminder of strength and endurance.’ Guan Wei, Two-finger exercise no.48, 1989, Museum of Contemporary Art, gift of the artist, 1993, image courtesy and © the artist, photograph: Jessica Maure

Shortly after he arrived in Australia, Guan made a series of collage works, Certificate (1990), using stamps, symbols and red ink as commentary on China’s officious bureaucracy, and family photos manipulated to define, confine and sometimes eliminate particular figures.

Guan’s family were direct descendents of Qing dynasty courtiers, and so were eliminated from public life in the Cultural Revolution of the 1960s and 70s. He has a particularly intimate experience of the whims of bureaucracy.

The question of how an artist living today may react to both the events of the present and the beauty of traditional art and nature is addressed in Paper War (2003), where a facsimile of a 17th century scroll painting by the Nanjing master Gong Xian has been overlaid by silhouettes showing military invasion and death by an unnamed enemy. 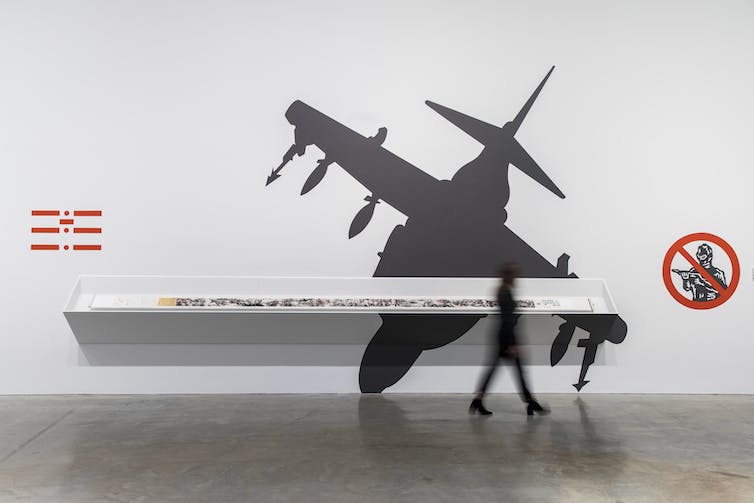 Paper War is a reaction to both the ‘events of the present and the history of traditional art.’ Anna Kucera/MCA

In 2014, Guan reworked Paper War as a video, which intersperses the scroll with animated figures of fighter planes and soldiers parachuting in to create destruction. There is no land so beautiful it can’t be despoiled by war.

In 2016 Guan entered the Archibald Prize with Plastic Surgery, a wry comment on the nature of immigration and acceptance.

A series of faces transition from the heavily regulated persona demanded by Chinese officialdom in the 1980s to the compromises made by immigrants to fit in with a new culture.

Guan’s art suggests it is far better for those moving between cultures to adopt another path – to find harmonious connections, to seek humorous twists in even difficult circumstances – and be guided always by the equilibrium of feng shui.

Guan Wei: MCA Collection is on view at the Museum of Contemporary Art, Sydney, until 9 February 2020