It’s not uncommon for science and religion to be framed as two opposing forces.

The Catholic church has famously struggled to accommodate scientific research in its past, but recently there has been evidence of a healthier relationship developing.

In many ways, Pope Francis has embraced science as a way of learning about the world. Notably, his encyclical has urged people to care more for the environment and climate change.

His message moves away from the concept of having dominion over the earth, and instead encourages stewardship of it. This stance has resonated with Catholics and other religious people world over.

By aligning the papal agenda more closely with what science tells us, what impact does Pope Francis have on how people of faith engage with and appreciate science?

There are a few potential motivators behind Pope Francis and the modern church’s dedication to the discussion of scientific issues.

First, it becomes harder all the time to refute basic scientific findings. Thus, it makes sense to accommodate new findings rather than isolate yourself from them.

Read more: God, why do scientists have such a hang-up with religion?

Apart from the pardoning of Galileo for the heresy of believing in the heliocentric solar system, an interesting example of this comes in the form of Vatican Observatory director Guy Consolmagno saying he would happily baptise an alien.

Another factor is that some scientific findings and advances are so significant that they present urgent moral issues. It is here, in the ethical implications of developing science, that the church finds traction.

In 1936, Pope Pius XI started the Pontifical Academy for Life to advise the church on scientific matters.

Today, the academy explores solutions to ethical issues in topics such as artificial intelligence, bioethics, human genome editing, and robo-ethics.

Furthermore, it’s possible the church has a genuine interest in promoting and contributing to science through its own research initiatives, of which the most famous is the Vatican observatory.

The observatory was originally created because of the need to precisely moderate the religious calendar. For centuries it has contributed significantly to modern astronomical research.

Faith and facts are not always at war

Catholics as a group seem quite amenable to the idea that science is compatible with the theory that God created the Universe.

In 2017, the Center for Applied Research in the Apostolate found that Catholics, compared with other religious groups, were more accepting of scientific world views.

1,927 people responded to the CARA poll, which resulted in 1010 interviews with self-identified Catholics. CENTER FOR APPLIED RESEARCH IN THE APOSTOLATE

As an example of this relative ease with science, the Church has allowed serious discussion around evolution since at least 1950, when Pope Pius XII said evolution could coexist with Catholic doctrine (even though the following paragraph of his statement mentions the Biblical Adam as a real person).

Read more: How can scientists believe evolution is compatible with religion?

This engagement with evolution was strengthened by John Paul II, who said evolution was much more than a hypothesis. He also won a lot of scientists over by formally acquitting Galileo of heresy.

Today, Pope Francis is quite open about his belief in evolution, albeit as a means by which God created humankind.

Perhaps because of this series of developments, American Catholics are ahead of their evangelical counterparts in accepting that life has evolved, rather than being created in its current form. 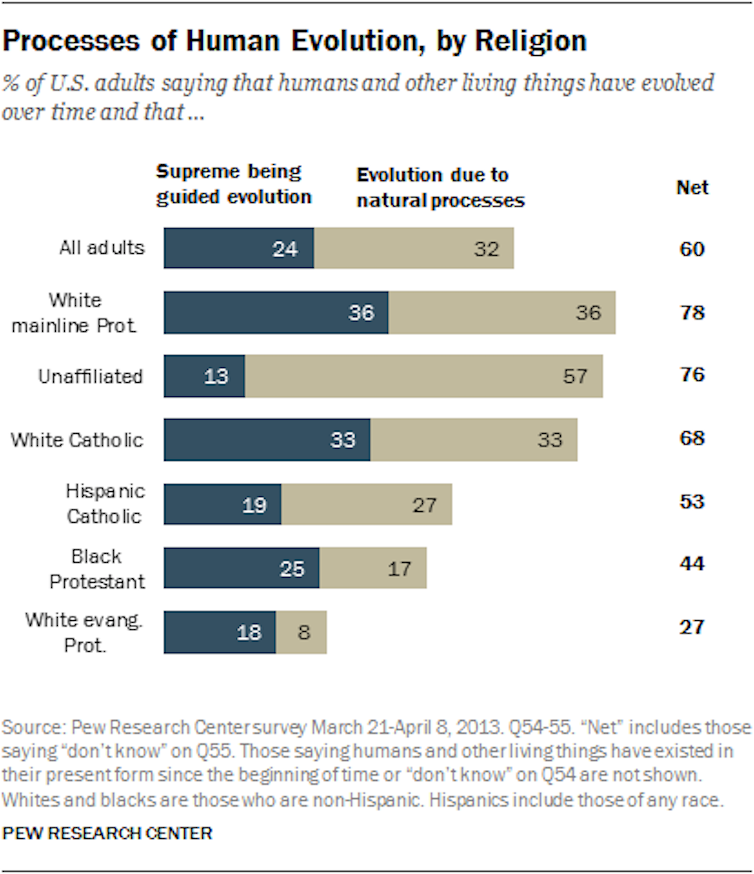 Of science, faith, or both?

There’s an old adage that science is about discovering empirical facts about the world and religion is about the meanings we find in it, but this is a shallow conception of both.

Religious teachings are often grounded in simple and immediate acts of living, and science gives us powerful narratives that help us understand our place in the Universe.

Many great scientists were Catholics, including Nicolaus Copernicus, Isaac Newton, Francis Bacon, Gregor Mendel, and Louis Pasteur. One could argue this was the result of cultural and philosophical norms at the time.

Read more: Yes, there is a war between science and religion

Of course, many modern scientists are people of faith, but the percentage of scientists who profess no faith is much higher than among the general public.

Even so, The Pontifical Academy for Life includes some of the world’s leading academics and scientists. While they may not be Catholics themselves, their willingness to engage with the church and advise them on critical issues is noteworthy.

This would not happen if the church and Pope Francis himself were not seen to value scientific expertise.

Leading the way ahead

The Catholic church is not a scientific institution, and it would be foolish to suggest it is.

Its religious purpose may be compatible with many aspects of science but, unlike science, its core tenants are not open to revision, even though these core tenants have seemed somewhat malleable over the centuries.

Despite this, the relationship between science and the church looks better now than ever before. The development of this relationship will have a significant impact on the public’s understanding of and engagement with science.

Considering the crucial role science and technology play in our prosperity as a species, we can only hope future popes continue to respect and act on the best scientific advice possible.

I would be happy to take that imperative as an article of faith.