The slaughter of horses bred for racing in Australia, as revealed in the ABC’s investigation, highlights the challenge of what to do with racehorses when their careers are over.

The ABC has questioned the racing industry’s claim that fewer than 1% of horses retiring from racing each year end up at an abattoir or knackery.

Once horses leave racing they are no longer under the industry’s control, and the fate of retired horses is not currently tracked. A 2008 study of horses entering an abattoir reported that 40% were Thoroughbreds, the breed used in racing.

But there are things the industry can do to extend the life of a racehorse, and help find a suitable home once their racing career is over.

Thoroughbred horses have been bred over centuries for speed and stamina. This allows them to do one thing better than any other members of their species: run.

Just as they can be bred for speed, they can also be bred for racing durability – the ability to withstand the rigours of training and racing.

If we come to value durability as much as other performance traits we can reward breeders who select for long racing careers alongside other attributes.

Valuing durability requires a shift from the current emphasis on finding the latest and greatest young horse each year for events such as the Golden Slipper (for two-year-olds), the Gold Coast Magic Millions (for two-year-olds), and The Oaks (for three-year-old fillies).

Australia is a leading producer of two-year-old racehorses, and there are rich rewards for the breeders of the next star of the track.

If the industry were to put the major prizes in place chiefly for the fastest eight-, nine- or ten-year olds, we could see a dramatic drop in wastage – the term used to describe the attrition of Thoroughbreds from active racing.

Trainers would have an incentive to celebrate their most durable horses and avoid the career-threatening injuries that remove many young Thoroughbreds from racing early in their careers. Breeders would also be rewarded for breeding the champions that win as veterans.

The Melbourne Cup is a case in point. It presents the opportunity to see some perennial stars of the of the turf, some of whom have competed in multiple Melbourne Cup races over the years.

Read more: Dressing up for Melbourne Cup Day, from a racehorse point of view

For example, last year’s winner, Cross Counter is back this year to try again as a five-year-old. 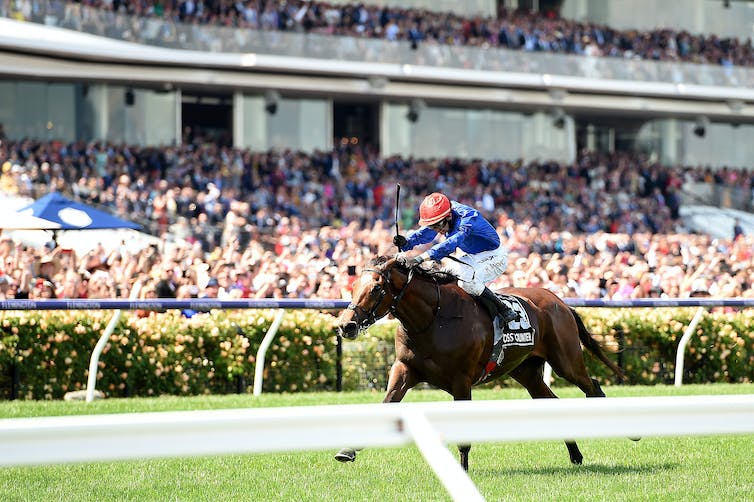 Cross Counter will be back at Flemington this year hoping to repeat last year’s win in the Melbourne Cup. AAP Image/Albert Perez

Weight-for-age handicapping allows younger horses to compete with fully mature horses over various race distances and at different times of the year.

Australia’s premier weight-for-age race, the Cox Plate, has frequently been won by older horses, including Winx for the past four years.

Beyond the race track

The athleticism, sensitivity and versatility of Thoroughbreds makes them ideal horses for a variety of equestrian disciplines, for both pleasure and professional riders.

But most Thoroughbreds begin their lives with a singular focus on racing, and there are significant differences between the behaviours that make for a successful racehorse and those suitable for recreational riding.

For example, race jockeys usually mount their horse while it walks around. The short stirrups found on racing gear don’t allow mounting from the ground, and Thoroughbreds are unused to the feel of a rider’s leg against their side.

So one of the first skills a transitioning racehorse has to learn is to stand still while a rider mounts from the ground, in contrast to what it has known all of its ridden life.

The cues used to control a racehorse differ widely from standard practices among recreational riders. Racehorses are often ridden with strong tension on reins which, when released, becomes a signal to accelerate.

In contrast, acceleration cues in recreational riding are given by a rider’s legs. One of the side effects of using strong rein tension is that horses learn to habituate to, or ignore, rein cues unless extremely strong pressures are applied.

This can make them unsafe to ride if they take fright, because a recreational rider may not be able to pull hard enough on the reins to get the horse to slow down.

Other problem behaviours can also arise as legacies of a racing career, including difficulty turning on circles, head-tossing, rearing, bucking, and overexcitement at shows or events.

These horses need to be retrained if they are to become safe riding horses. This can take at least four weeks and cost around A$1,000.

For the 2017-18 season, 11,177 Thoroughbreds were registered, which would lead to an estimated 5,000 geldings needing a new home outside the racing industry.

Read more: Breeding Thoroughbreds is far from natural in the race for a winner

The industry would need to provide at least A$5 million per year for retraining the retired geldings alone, if they were all viable for non-racing equestrian careers.

Even after retraining, the behavioural legacies of their racing career can make some racehorses unsuitable for inexperienced or recreational riders, limiting their post-racing career options. ABC presenter Jonathan Green’s experience, in the wake of the ABC’s revelations, is a telling example.

Still, we’ve highlighted just some of the options that could help reduce wastage in the industry and provide a better life for horses during and after racing.

Others include a proposed National Horse Traceability Register that would track a horse’s journey throughout its life.

This would provide a truer picture of the ultimate fate of Thoroughbreds – including just how many are actually suitable as equestrian or pony club mounts, and how many ultimately have no other value than as food for humans or pets.