My friends are taking ecstasy at raves and music festivals. Is it safe? — Anonymous

What is ecstasy or MDMA?

Ecstasy is a slang term for drugs meant to contain...

My friends are taking ecstasy at raves and music festivals. Is it safe? — Anonymous

What is ecstasy or MDMA?

Ecstasy is a slang term for drugs meant to contain 3,4- methylenedioxymethamphetamine (MDMA), a stimulant that can also cause mild hallucinations at high doses. While ecstasy was traditionally sold as tablets, it’s increasingly sold in crystal, capsule and powder forms.

According to the most recent data, only 1% of Australians aged 12-17 said they had tried ecstasy. However, studies suggest young Australians who attend music festivals are much more likely to have tried it.

There seems to be a common perception ecstasy is “safe”. But no drug use — legal or illegal — is completely safe. While drug experts rank ecstasy as less harmful than other drugs, such as “ice” and alcohol, there are still significant risks involved:

What are the risks when taking it at festivals?

In recent years, there have been more reports of drug-related deaths at festivals. While the media typically describes deaths involving ecstasy as “overdoses”, most ecstasy-related deaths are not the result of simply taking too much.

Drug experiences can be influenced by lots of different things and music festivals can sometimes result in a “perfect storm” of risk factors. For example, an experienced male taking an ecstasy pill at a quiet gathering at home is likely to have a very different experience to an inexperienced female taking her ecstasy pills at a crowded festival on a 35℃ day.

Females, those with lower body weight, and/or those who haven’t used ecstasy before, and therefore haven’t built up any physical tolerance, should use a smaller dose. 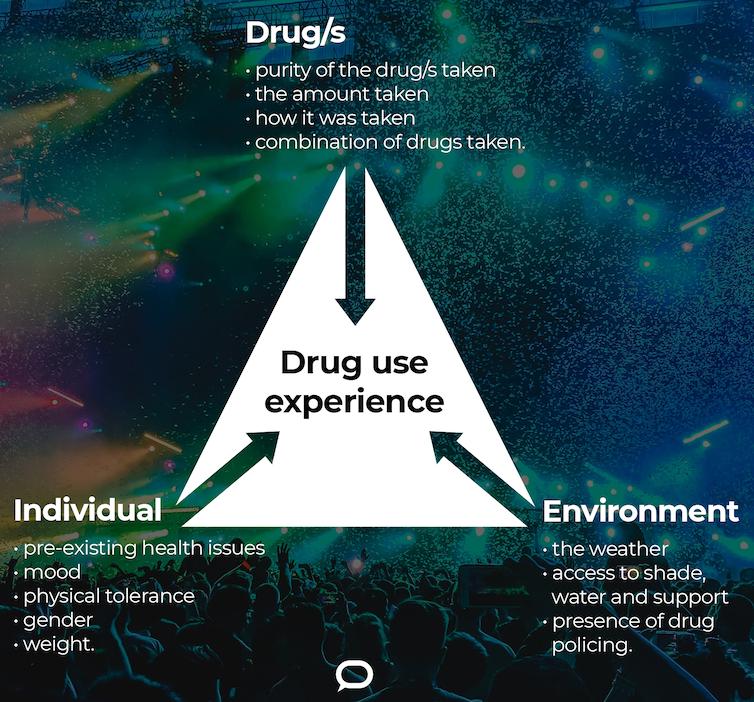 Drug experiences can be affected by lots of different things.

Some key risks at music festivals include:

Worried about your friends?

If you’re going to a rave or festival and suspect some of your friends might take illicit drugs, it’s important to be aware of the risks, look out for your friends and know where to get help. Here are some tips:

I Need to Know is an ongoing series for teens in search of reliable, confidential advice about life’s tricky questions.

If you’re a teenager and have a question you’d like answered by an expert, you can:

Please tell us your name (you can use a fake name if you don’t want to be identified), age and which city you live in. Send as many questions as you like! We won’t be able to answer every question, but we will do our best.