Ask any economist a question, and you will usually get the answer: “productivity”.

The winner of the 2008 Nobel Prize in Economics, Paul Krugman, set the standard in 1994:

Productivity isn’t everything, but, in the long run, it is almost everything. A country’s ability to improve its standard of living over time depends almost entirely on its ability to raise its output per worker.

The new head of Australia’s treasury, Steven Kennedy, said much the same thing this week:

The most important long-term contribution to wage growth is labour productivity.

For my money, they could say the same about “carbon productivity”, a idea that is going to matter to us more.

Labour productivity is notoriously hard to measure; measuring changes in it is harder still.

And it’s less important than you might think. People aren’t a particularly finite resource. Allowable carbon emissions are.

Carbon is the input that matters 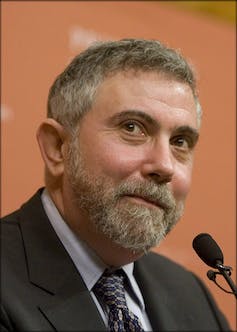 Economist Paul Krugman. ‘In the long run productivity is almost everything.’ CHRISTOPHER BARTH/EPA

The Intergovernmental Panel on Climate Change says net carbon emissions will have to be reduced to zero.

That means we’ve a carbon budget, a limited amount of greenhouse gas we can emit from here on. It would make sense to use it wisely.

What I am proposing is a target for “carbon productivity”, the amount of production we achieve from each remaining unit of emissions – as a means of helping us cut overall carbon emissions.

We are going to need huge increases in carbon productivity, much more so as a result of cutting emissions than increasing production.

Things that are good for labour productivity might well be bad for carbon productivity. For example, replacing a sweeper with an air blower is good on the first count, bad on the second.

If introduced at a national level, a target, or at least a widely published measure, could start to focus government minds on what’s important and what’s not, and assist in allocating resources. Solar farms would become more likely to gain support than coal-fired power plants.

Regulatory resources might be redirected in surprising ways. While a small number of large emitters constitutes an easy target for policymakers, if those large emitters are efficient, the government might find it has to move its focus to the larger number of small inefficient emitters.

It could also help us think about how we resolve the conflict between the perceived need for economic growth and the need to substantially cut emissions. Both would be important, the measures that achieved both would be the most important.

Accounting debates about whether to carry carry forward international credits would be rendered meaningless.

Read more: We can be a carbon-neutral nation by 2050, if we just get on with it

Giving national attention to measuring carbon productivity would put more pressure on more firms to measure all of their emissions. Many already measure their “scope 1” direct emissions. A smaller number measure “scope 2” emissions (from things such as electricity used by the firm).

A much smaller number measure “scope 3” emissions (from sources they do not own, such as air travel, waste and water). They’re the hardest to measure.

For some, sustainable economic growth is a contradiction in terms.

They argue that economic growth is incompatible with ecological survival.

But the population appears to want both, and the political and social consequences of failing to achieve both could be devastating for democratic society and the planet. It has already been established that rising unemployment reduces support for action on climate change.

Read more: There's evidence that climate activism could be swaying public opinion in the US

Targeting or measuring carbon productivity by itself won’t achieve those goals.

For that, we would need some form of carbon pricing and a government committed to the uptake of low-emission technologies.

But if we are to have a shot at achieving both, we’ll need to know where we are going.