In a recent interview Malcolm Turnbull raised the possibility that these days many so-called “conservatives” in the Liberal Party might be better described as “authoritarian populists”.

It would be easy to dismiss his comments as being those of a bitter former leader. But maybe Turnbull has a point, and perhaps it might even be applied more broadly to the Morrison government.

Although the term “authoritarian populism” is often associated with far-right parties, it has also been used to describe mainstream governments, such as those of Margaret Thatcher (1979-1990).

Read more: Why a code of conduct may not be enough to change the boys' club culture in the Liberal Party

Thatcherite populist rhetoric mobilised the people against big government and elite special interests, which was combined with authoritarian measures such as increased policing of ethnic minorities and militant unions.

This is particularly the case given Morrison’s recent embrace of a Trump-influenced anti-globalist rhetoric, which seems partly aimed at asserting Australian independence from international human rights frameworks.

The populist tinge to Morrison’s politics was obvious during the 2019 election campaign. Morrison countered Labor’s own populist arguments (standing against the “top end of town”) by using an alternative populism that mobilised the people against big-spending, big-taxing Labor governments. He argued that Labor would rip off ordinary citizens, run up big debts and ruin the economy, costing jobs in the process.

Morrison’s election persona of “ScoMo”, the warm and friendly daggy dad from the suburbs, might not seem authoritarian. However, even then, there were authoritarian tendencies creeping in to his populism. This is not just in his attitudes to asylum seekers, but also to Australians. For example, Morrison’s slogan: “A fair go for those who have a go” implied that some welfare recipients didn’t deserve the benefits they were getting. 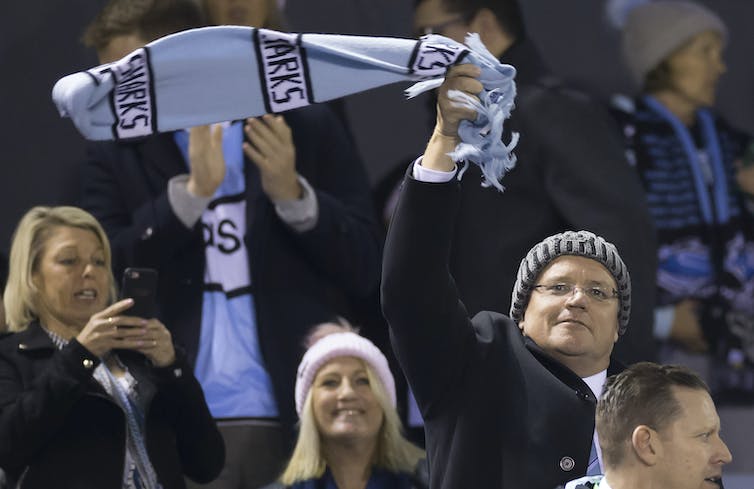 Morrison’s ‘daggy dad’ persona may not seem authoritarian, but there are strains of it in his populism. AAP/Craig Golding

Indeed, the Morrison government’s authoritarian policy agenda also has a punitive element that has become more evident since the election. Not only has the government emphasised it won’t increase Newstart (despite even business groups calling for an increase), but welfare recipients have been increasingly demonised.

The social services minister reportedly rejected increasing Newstart on the grounds that many welfare recipients would just spend the money on drugs and alcohol. The government has instead revived punitive mandatory drug-testing proposals for welfare recipients.

The government has also supported an expansion of the cashless welfare card, despite trenchant criticisms from the Australian Council of Social Service.

Morrison has dismissed calls for greater media freedom with the populist argument that journalists should not be “above the law”. (In doing so, he implies journalists are an elitist group demanding special privileges denied to ordinary people.)

Yet it is governments that make the law, including authoritarian and punitive laws that can shield them from proper democratic scrutiny. Suggesting that the attorney-general should have the final say on whether police proceed with prosecutions against journalists compounds, rather than reduces, the problem.

It is not just powerful media organisations facing the government’s authoritarian streak. Attacking higher energy prices is a popular move (and easier for the Liberals than developing a full energy policy, given internal divisions).

But businesses have expressed their concern at the “big stick” potentially being wielded against them. Predictably, though, it is unions that face the government’s most authoritarian measures, with the ACTU arguing the proposed new laws are designed to bust them.

Admittedly, as I have argued elsewhere, none of these authoritarian tendencies are totally new. The Howard government had a history of tough legislation against unions and of defunding advocacy groups.

Australian governments have introduced increasingly authoritarian measures that the United Nations and human rights organisations have criticised previously for undermining Australian democracy, including under Turnbull’s watch.

Many moderate Liberals who remembered Turnbull from his libertarian spycatcher days, opposing British government secrecy, were sadly disappointed by his failure to stand up to the right-wingers in his party on such issues. (Admittedly, Labor often capitulated on so-called national security issues as well.)

Nor is it unusual for conservatives in the party to demonise protesters. Indeed, a NSW Liberal premier once reportedly urged a driver to run them over.

Read more: Win or lose the next election, it may be time for the Liberals to rethink their economic narrative

However, the attitudes towards Newstart, for example, are very different from the days when Robert Menzies was proud of increasing unemployment benefits. The authoritarian industrial relations measures are also a far cry from the social liberal traditions that used to influence the Liberal Party. The eroding of civil liberties will be concerning to many small-“l” Liberal voters, as well as to more left-wing voters.

Some Turnbull supporters would have felt relieved when he was replaced by Morrison rather than the Coalition’s hard man, Dutton.

However, perhaps “ScoMo” is just a more personable Dutton in some respects. Whether his government’s punitive measures will eventually undermine Morrison’s warm and friendly election image remains to be seen.