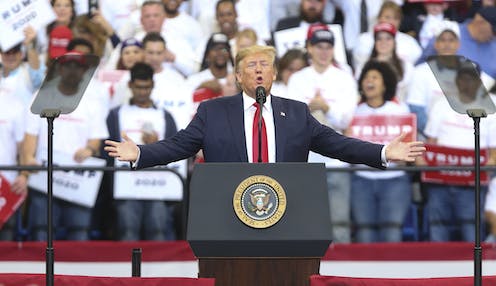 A year away from the November 2020 presidential election, Donald Trump has a 41.4% approval, 54.6% disapproval rating with all polls in the FiveThirtyEight aggregate. His net approval is -13.2%, down 0.8% since my October 10 article.

In the FiveThirtyEight tracker, 47.5% support actually removing Trump from office by impeachment and 45.7% are opposed (47.4-44.7 support four weeks ago).

On October 31, the Democrat-controlled House officially voted to begin an impeachment inquiry by 232-196. As I said previously, while the house will very probably impeach Trump, the Senate is very unlikely to reach the two-thirds majority required to remove him.

In national general election polling against the three leading Democrats, Trump trails Joe Biden by 10.2% in the RealClearPolitics average (7.4% on October 10). He trails Elizabeth Warren by 7.3% (4.5% previously) and Bernie Sanders by 7.9% (5.2%).

How the Electoral College could save Trump again

To win the presidency, a candidate needs at least 270 Electoral College votes. The 538 total Electoral Votes (EVs) are apportioned winner-takes-all by state with two minor exceptions. Each state’s EVs is the sum of its house seats (population-based) and senators (always two).

While Trump’s national ratings and general election match-ups are poor, a poll of the six closest 2016 Trump states gives him a real chance. In this Siena College poll for The New York Times of the states of Michigan, Wisconsin, Pennsylvania, Florida, Arizona and North Carolina, Trump trails Biden by two points overall, is tied with Sanders and leads Warren by two.

In 2016, Trump won these six states collectively by two points. Despite losing the national popular vote by 2.1%, Trump exceeded the magic 270 Electoral Votes when he won Wisconsin by 0.8%, so the difference between the national vote and the “tipping-point” state was 2.9%.

Trump’s 2016 win was a result of strong backing from non-college educated whites, who make up a large share of the population in the mid-west. This poll suggests Trump’s support is holding up with non-college whites. The Democratic vote could be more inefficiently distributed than in 2016.

I do not believe there will be an eight-point difference between the national vote and battleground states, which this poll suggests when compared with current national polls. The Siena poll was taken October 13-25, a better time for Trump nationally. It may also be Republican-leaning.

In the October US jobs report, 128,000 jobs were created and the unemployment rate was 3.6% (up 0.1% since September, but still very low historically). The participation rate increased 0.1% to 63.3% and the employment population ratio was steady at 61.0% – matching September’s highest since December 2008.

These two economic reports are good news for Trump. If the economy was all-important, Trump would be a clear favourite for re-election. But Trump’s general behaviour has angered many who might otherwise have voted for him based on economic factors.

Trump will need the economy to stay strong until November 2020 to have a realistic chance. It is likely a weak economy is the only thing that would shake Trump’s support with non-college whites.

Three weeks after the October 15 Democratic debate, Biden leads with 29.7% in the RealClearPolitics average of national Democratic polls, followed by Warren at 20.8%, Sanders at 17.8% and Pete Buttigieg at 6.7%. Nobody else has more than 4%. In the past four weeks, Warren has lost votes to Sanders and Buttigieg, owing perhaps to her difficulties with the Medicare for All policy.

Two recent polls in Nevada (February 22) give Biden an eight or ten point lead over Warren. Biden still has a large lead in South Carolina (February 29).

After failing to win parliamentary approval for his Brexit deal in time for the October 31 exit date, Prime Minister Boris Johnson won House of Commons backing for a December 12 election on October 29. The European Union had extended the Brexit deadline to January 31 at parliament’s request.

I wrote for The Poll Bludger on October 29 that Labour’s chances of winning will improve if they can make the election a referendum on Boris Johnson’s deal, which has plenty to attack from a left-wing perspective. Leave was helped by being undefined at the 2016 Brexit referendum, now it is defined.

Canada and other elections

I live-blogged the October 21 Canadian election for The Poll Bludger, in which the centre-left Liberals won a second term, but lost their majority. I also covered the Argentine and Polish elections for The Poll Bludger: a centre-left presidential candidate won in Argentina, and the Law and Justice party retained its lower house majority in Poland.

On my personal website, I wrote about the Greens’ surge at the October 20 Swiss election, where a unique system of executive government is used. Also covered: the left-wing Bolivian president was re-elected for a fourth successive term, the far-right dominated Hungarian local elections despite a setback in Budapest, and the far-right surged in German and Italian October 27 state elections.

In the latest Australian Newspoll, conducted October 17-20 from a sample of 1,634, the Coalition led by 51-49, unchanged since late September. Primary votes were also unchanged, with the Coalition on 42%, Labor 33%, Greens 13% and One Nation 6%.

This Newspoll was the fourth consecutive Newspoll with the Coalition ahead by 51-49. Newspoll’s lack of volatility probably contributed to the poll failure at the May federal election, but this does not appear to have changed.