Land titling in Australia has undergone a revolutionary shift over the past four decades. The return of diverse forms of title to Indigenous Australians has produced some semblance of land justice. About half the continent is now held under some form of Indigenous title.

Forms of title range from inalienable freehold title to non-exclusive (or shared) native title. Much of this estate is in northern Australia, as this recent map shows. 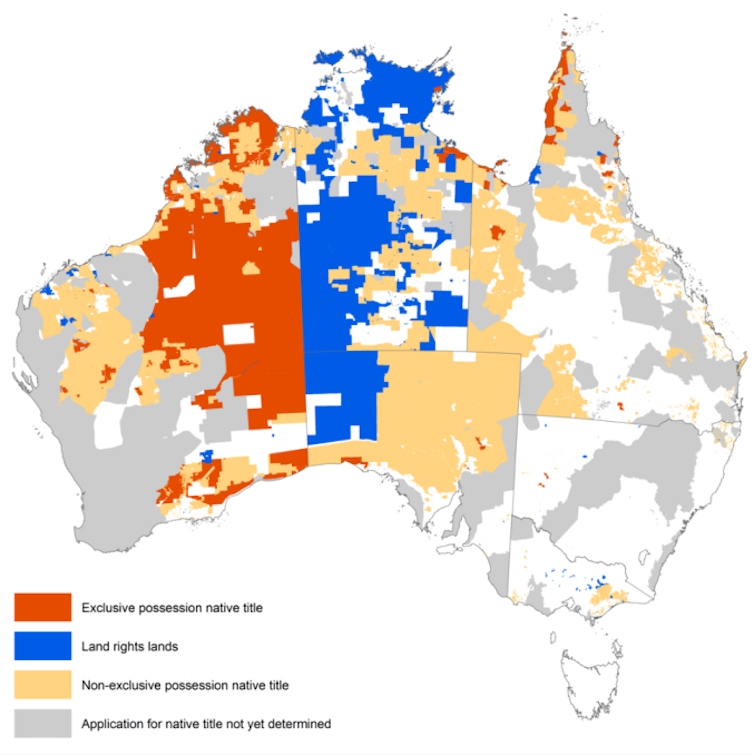 Another map from 2014 shows over 1,000 discrete Indigenous communities and the division between north and south.

What’s different about these lands?

These lands and their populations have some unusual features.

First, the lands are extremely remote and relatively undeveloped in a capitalist “extractive” sense. These are the largest relatively intact savannah landscapes in Australia — and possibly the world.

Much of this estate is included in the National Reserve System as Indigenous Protected Areas because of its high environmental and cultural values, according to International Union for Conservation of Nature (IUCN) criteria.

Indigenous Protected Area management plans address these threats to ensure biodiversity and cultural values are at best restored or maintained, at worst not eroded.

Read more: Churches have legal rights in Australia. Why not sacred trees?

Second, parts of these lands in the wet-dry tropics are valuable as sources of emissions avoidance and carbon storage.

Many groups are paid through offset markets and voluntary agreements to reduce overall emissions. There are emerging options for payment for long-term carbon storage – between 25 and 100 years.

These lands have some of the world’s highest solar irradiance. Multi-billion-dollar solar and wind/solar/green hydrogen facilities are being developed.

Third, the Indigenous owners and majority inhabitants are among the poorest Australians. Only 35% of Aboriginal adults in very remote Australia are formally employed. Over 50% of Indigenous people in these areas live below the poverty line.

Such poverty is explained partly by past colonisation and associated social exclusion and neglect, geographic isolation from market capitalism and labour markets, and different priorities.

Having legally proven continuity of customs, traditions and connection to reclaimed ancestral lands, landowners generally look to care for their country. They use its natural resources for domestic non-commercial purposes as allowed by law.

But Indigenous people continually struggle to inhabit these lands. Their dispersed small settlements range from townships to homelands. Government support is minimal and policy intentionally discouraging.

Read more: Building in ways that meet the needs of Australia’s remote regions

The problem with official development models

Since federation, many government policy proposals to “develop the north” have sought to replicate the economic growth trajectory of the temperate south. Such plans are based on state-sanctioned, often environmentally damaging, market capitalism.

The latest version is the 2015 Our North, Our Future white paper, released after a parliamentary inquiry. In submission 136, Francis Markham and I asked, “developing whose north for whom and in what way?” We pointed out 48% of the north’s 3 million square kilometres was under Indigenous title at that time, and Indigenous ideas about the land are often very different from those of the government and corporate, mainly extractive, interests.

Read more: The keys to unlock Northern Australia have already been cut

Four years on, a Senate select inquiry is examining how the Our North, Our Future agenda is progressing. A specific reference to First Nations people has been added. In submission 13, we highlighted four fundamental changes over the past five years.

We are at a critical crossroads in policy thinking about northern Australia.

The dominant approach sees it as ripe for capitalist development, extraction and associated economic growth, irrespective of environmental consequences. Corporate pressure to undertake risky fracking for oil and gas and to develop industrial-scale agriculture and aquaculture projects epitomises such thinking.

The holistic focus of ecological economics informs an alternative approach. It’s based on the tenet that everything connects to everything else: the economy is embedded in society and society is embedded in the environment, the natural order.

This line of reasoning resonates with the focus of many Indigenous landowners on the need to nurture kin, ancestral country and living, natural resources.

Read more: What is ‘ecological economics’ and why do we need to talk about it?

Development in the north might take many transformational forms as we strive for a zero-emissions economy.

Economist Ross Garnaut discusses the potential of a zero-emissions economy in Australia.

Indigenous-titled and peopled lands are well positioned to drive this in three proven ways:

The same landscapes can be used for sustainable wildlife harvesting for food and diverse forms of cultural production for income. These uses accord with Indigenous tradition and leave minimal environmental footprints.

Policy and practice must be informed by the environmental perspectives of Indigenous landowners, which are highly compatible with the core concepts of ecological economics.

In these ways, the North could emerge as a powerhouse region beyond current imaginaries. The climate crisis makes this transformation essential.

As ecological economies, remote Indigenous lands could deliver sustainable livelihoods to Indigenous people and contribute significantly to a zero-emissions economy of critical benefit to national and global communities.