While thousands of Hong Kongers have protested “like water” for the past six months – flowing through the city with seemingly spontaneous movements – the past week has seen a shift in strategy. Last week, students escalated their actions yet again by occupying most of Hong Kong’s universities.

The last remaining occupation at Polytechnic University remains under siege by the police force. Police say surrender is the only option for the students and have threatened to use live ammunition if they are attacked. 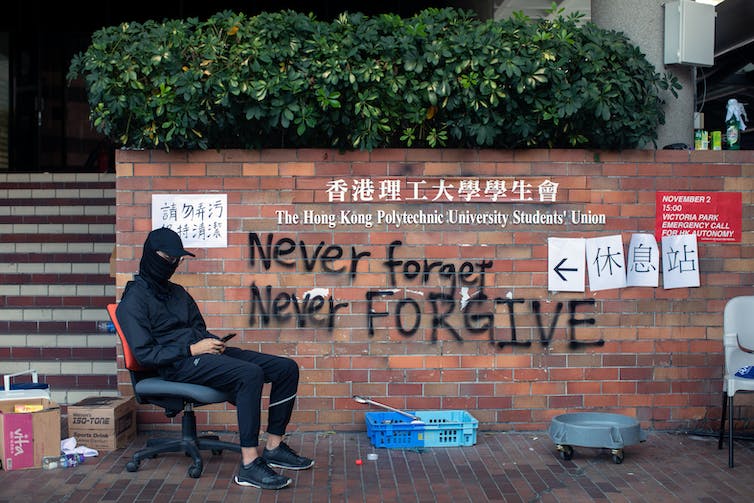 Hundreds of protesters, including secondary school students, have been trapped inside since Sunday. Jerome Favre/EPA

Why universities are sanctified spaces

The siege comes off the back of months of ratcheting police violence in response to the protests, including the use of live rounds, water cannons and nearly 6,000 canisters of tear gas.

The protesters, meanwhile, have remained mobile and flexible, which has allowed them to keep going for so long. This adherence to being “like water” has helped overcome the limitations that demonstrators faced in previous protests.

The government, for example, was able to wait out the 79-day Umbrella Movement in 2014, banking that protesters would eventually find the daily grind of occupying city streets too difficult.

The Tiananmen Square occupation in 1989, likewise, was vulnerable to a Chinese military crackdown because the protesters were congregated in a central place.

Read more: 'We fear Hong Kong will become just another Chinese city': an interview with Martin Lee, grandfather of democracy

The current university occupations in Hong Kong – and the shift away from “being water” – happened not out of choice but necessity.

Universities are sanctified spaces in Hong Kong. As education providers, they are symbols of freedom and are formally protected under Hong Kong law. In a city of limited democracy, the law deems universities to be private property, meaning there is a protocol preventing police from entering campuses unless it’s an emergency.

When several police officers were found inside the University of Hong Kong in July, for example, the police issued an apology .

Hong Kong’s universities also represent what the protesters are fighting for. They are a space for democracy-building, and it’s no secret that many students have used the protection of campuses to organise. Some dormitories have become spaces for storing medical supplies and equipment to respond to police violence.

Then, last week, these safe spaces were threatened when police officers began moving on several campuses across the city to make arrests. The subsequent student occupations arose as a defensive posture to protect universities - and everything they represent - from state intervention.

Students have been actively supported by academic and administrative staff, who have closed campuses in an attempt to de-escalate the situation, acted as mediators with police and criticised the government for its “ineffective” response to the protests.

But unlike the fluid occupations of Hong Kong streets, shopping malls and the airport of previous months, the students found themselves fixed inside the universities. The police soon sensed an advantage, and at Polytechnic University they formed barricades around the campus. 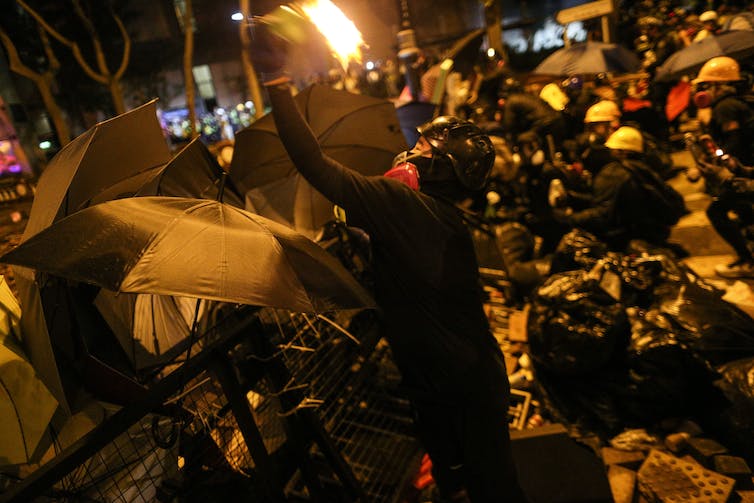 Using arrest as a form of intimidation

The siege has had a military quality. For the first time, police deployed a LRAD sound device, a controversial weapon previously used in the Iraq war.

The students, meanwhile, have retaliated with petrol bombs and bows and arrows. When some have tried to flee, they have been bombed with tear gas and pushed back onto campus.

Read more: Hong Kong is one of the most unequal cities in the world. So why aren't the protesters angry at the rich and powerful?

As of today, the university is still blockaded with more than 100 students believed to be inside. There have been multiple police invasions and retreats. New flanks of protesters have surrounded the police cordon. Older residents are forming human chains to get medical supplies to the site.

Police have threatened that every person left inside the university will be arrested. Protesters have been told they will be charged with rioting, which carries a maximum punishment of 10 years in jail.

Mass arrest has been used in an attempt to force protesters to back down for a while now. Hong Kong police reported this week the total number of arrests for the duration of the protests is so far 4,491 (more than 750 of them children).

Everyone arrested is subject to at least 48 hours detention. Some have been held in a controversial, remote detention facility, where detainees have alleged abuse in custody.

One explanation for all the arrests is that police are trying to remove key leaders from the front lines. Academics also see it as a form of intimidation.

In the past two months, some arrests were made even without strong evidence. I think police are adopting the strategy of arresting people to deter others from taking part in the protests.

Beyond arrest, the students have reason to be concerned. Many occupiers have written letters to their loved ones, fearing they will die. Democracy supporters and religious leaders are pleading for them to be released safely. They fear some protesters may refuse to leave, choosing instead to make a last stand.

The Hong Kong government’s approach is to try to deescalate the protests through fear. But the university siege, the now-overturned ban on wearing masks and the threats of live ammunition all show that Hong Kong’s protesters will not back down based on threats or violence.

Only meaningful changes to how the police work and how the government operates will end this battle for Hong Kong.