The government at the weekend piled on more pressure for Westpac heads to roll over the bank’s money laundering scandal, with Treasurer Josh Frydenberg saying the affair had a long way to play out.

“These issues develop a momentum of their own. They’ve got an AGM on December 12 – and, no doubt, there’ll be some very hard discussions between now and then,” Frydenberg said.

The treasurer also revealed the Australian Prudential Regulation Authority (APRA) had become involved. APRA supervises banks and other institutions in the financial sector.

“APRA has the ability, under the Banking Executive Accountability Regime, to disqualify boards and to disqualify executives where there’s a failure to appropriately enforce and uphold the duties under the legislation,” Frydenberg said.

“That legislation came into force in 2018. It’s not retrospective, and some of those alleged breaches date back to 2013. But … I know that APRA is looking at it”.

Westpac last week was accused by AUSTRAC of 23 million breaches of the anti-money laundering and counter-terrorism financing law, with the alleged breaches include transfers of money to the Philippines for child sex exploitation. AUSTRAC has begun civil proceedings against Westpac.

AUSTRAC is an official agency that uses financial intelligence and regulation to disrupt money laundering, terrorism financing and other crimes.

Frydenberg’s comments came as Westpac on Sunday announced a “response plan” across three areas. These included

In political terms, the latest bank scandal comes at an awkward time for the government, which has its ensuring integrity legislation, to crack down on rogue unions and union officials, before parliament on Monday.

After accepting amendments from both Centre Alliance and Pauline Hanson, the government said on Sunday it was confident the legislation, strongly opposed by Labor, will pass.

Asked on the ABC what form the Westpac board’s accountability should take, Frydenberg said: “There must be accountability, and that will obviously involve decisions that they take about the futures of senior management, as well as the board”.

So far, there has been no sign of Westpac taking heed of the hints and calls for resignations.

The government’s position had consistently been that membership of boards were matter for shareholders and boards determined executive teams, Frydenberg said.

“That being said, these are very serious issues. There must be accountability. 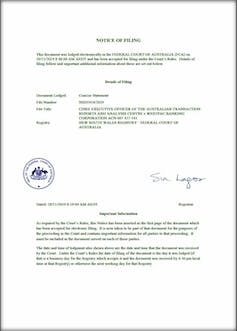 Federal Court notice of filing "AUSTRAC have been highly critical in their statement. And now APRA is looking into it. "So I don’t think there’s any doubt as to the seriousness of these issues and the government’s position,” he said. “We’re talking about a failure to adequately assess customers with links to child trafficking and child pornography. "And we’ve seen, from AUSTRAC, a statement that there has been indifference by the board, that there’s been a systematic failure by the bank and there’s been inadequate oversight”. Frydenberg said the Westpac board and management were “all seized of this issue, and they’re now going through a process. But with APRA providing additional focus, as well as AUSTRAC, certainly the heat is on the company”. He said he had spoken to the bank’s chairman, Lindsay Maxsted, and CEO, Brian Hartzer. Obviously I made very clear the seriousness of these issues. But they also made very clear to me that they have a process now underway where they’re bringing independent experts in, and they’re determined to provide a way forward. And, of course, this is before the courts too. ‘Truly sorry’ Westpac’s board has issued an unreserved apology. Maxsted said after a board meeting on Friday: “The notion that any child has been hurt as a result of any failings by Westpac is deeply distressing and we are truly sorry”. “Our board, CEO and management team are fully committed to fixing these issues and we are taking all steps necessary to urgently close any remaining gaps and fix our policies and procedures so that this can never happen again.” 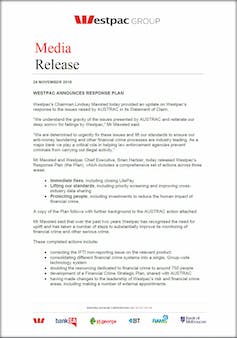 Westpac's weekend response. He said significant improvements had already been made “including reviewing and taking action on all of the individual customers mentioned by AUSTRAC and establishing a multi-layered review.” In Westpac’s Sunday statement Maxsted said, “We accept that we have fallen short of both our own and regulators’ standards and are determined to get all the facts and assess accountability”. In the interim the board had decided that either all or part of the 2019 bonuses would be withheld for the full executive team and several of the general managers “subject to the assessment of accountability”. Under its “protecting people” measures Westpac will match the International Justice Mission’s current funding, investing $18 million over three years to fight online sexual exploitation of children in the Philippines match the federal government’s current funding for its SaferKidsPH partnership with various organisations, investing $6 million over six years to raise awareness of online sexual exploitation of children and support programs to protect children in the Philippines convene an expert advisory roundtable to develop a program to support prevention of online child exploitation. The bank will provide up to $10 million a year for three years to implement these recommendations.